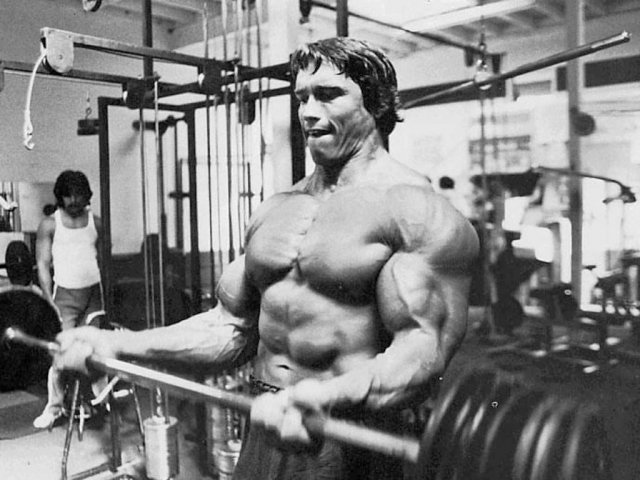 We’ve all seen THAT GUY in the gym. You know, the guy that loads the bar up with so much weight, that he can only move it a few inches, while calling it a partial rep. Some are usually impressed with the big weight being moved from point A to point B, even though the distance between A and B is fairly short. Other aren’t as easily impressed and may proceed to laugh and snicker at the poor display of a rep. I myself, could care less what the next guy is doing in the gym if it doesn’t affect me and my training session. I’m reminded of a recent and popular You tube video where a man loads a bar with as many plates as he can manage in a squat rack.

This man gets underneath the already bending bar, squats down about 3-4 inches at the most and struggles to get back up to the top. The bar ends up snapping in two in the middle of the set. The guy ruined a perfectly good bar and looked like a moron in the process. We all know that lifting heavy weight is essential for muscle growth. At the same time, when range of motion is limited in order to handle heavier loads, is muscle growth being sacrificed?

Strength training movements can be broken down into four basic types. Full range of motion (ROM), partial range of motion, eccentric movements, and isometric holds. For the sake of what is being covered here, Full ROM and Partial ROM are the two that hold relevance.

Full range of motion is the act of moving as far anatomically possible during a given exercise. In a recent study in the Journal of Strength and Conditioning, researchers looked to draw the final line on range of motion. The study was 12 weeks long, and over this time period the participants did squats and other leg exercises 3 days per week. One group did their leg work from 0-50 degrees, and the other group did the same exercises at 0-90 degrees. After 12 weeks the size and strength of the muscle was greater in the group with the greater range of motion. Fat stores within the affected muscle were measured and interestingly, they were reduced more in the group with the longer range of motion. The researchers wanted to take many what ifs out of the equation by using greater loads when the shorter range of motion was performed. That’s generally the reason why partial are performed anyway, to lift heavier weights. The shorter range of motion group used 10-25% greater weight than the longer range group and still didn’t do as well in the end results.

The researchers looked at the internal loading directly on the muscle being trained. As biomechanics change throughout a rep, so does the internal load, even when the weight being lifted doesn’t change. There is simply varying stress from any weight at different points within any given movement. It was discovered that the load on the muscle in the full range motion was actually greater even though participants were lifting less weight. This proves that Full ROM movements are more effective than Partial ROM movements for size and strength.

Using a Full ROM while training is important when strength and maximum muscle growth are the goals, but it can also lead to unnecessary injuries if its not used within it’s effective boundaries. Range of motion is most effective when the movements of an exercise are stopped just before total contraction or extension. This ensures that the resistance is never removed from the muscle being trained. For certain exercises, the point of total extension on the negative movement increases the risk of a muscle tear because its extended past the point of control. When the muscle is extended past the point of control the weight is being handled less by the muscle and more by the tendons. This increases the risk of injury.

Many successful athletes regularly use Partial ROM work. The board press is a great example, often performed by powerlifters. Explosive movements such as box jumps and sprinting can also be considered Partial ROM exercises. Partial ROM exercises can be successfully integrated into many training programs, but Full Range of Motion movements are without a doubt the single best choice for increasing strength and muscle mass.