Does Excessive Weight Loss in Female Competitors Cause Health Risks? 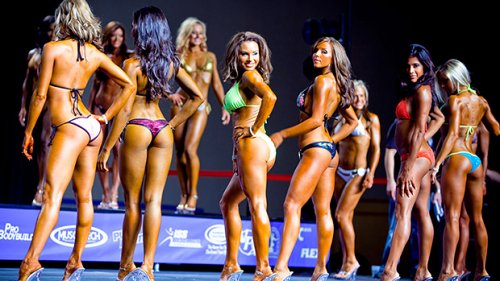 The industry today is definitely not lacking hardworking women. In fact, today there are more female competitors than ever before in the fitness industry. Their hard work and dedication to their craft is showcased on stages across the globe. That being said, many people believe the excess weight loss that some women endure is doing them more harm than good. And now a study has been conducted to confirm or deny once and for all.

Female competitors go through months of dieting to drop their body fat down below what we would call “normal” levels. In addition to the strict diet, these women are also exerting a lot of time and effort in the gym to maintain their hard-earned muscle mass.

In this particular study, there were a total of 50 women used as subjects. They were split into two separate groups—27 women were to diet for a competition while the other 23 were used as a control group and had to maintain their weight. The group of women who were to diet for a competition did so by reducing their carbohydrates and by increasing their cardio. In addition, they raised their intake of protein each day along with following a resistance training protocol.

What the study showed was that reducing weight and body fat for women can indeed be done in a health manner even when women are strict and getting ready for a fitness competition (even when the amount of fat mass is decreased 35-50%). There were no negative health side effects had by either group during the study. The only thing they noticed was that there was a hormonal change in the group dieting for a competition after hitting the 4-month mark and when body fat was decreased significantly. There were some menstrual irregularities by the group dieting as well as a decrease in leptin, triiodothyronine (T3), testosterone, and estradiol. None of which caused any changes in the health of the women. All of these levels returned back to normal as did their body weight after the diet was finished and the women were in their recovery period after the competition (generally around the 3-4-month mark).

Researchers noticed that during the diet, the women held onto their lean muscle mass and equated this to the increase in protein intake from their diet along with the continued resistance training. This is very important news when striving for muscle preservation when getting ready for competition.

They also mentioned that it’s still a good idea that after the competition is over, to return to a normal non-restrictive nutrition plan as well as backing off of the intensity in the gym a little to allow the body to recover from the physical demands that were put on it due to the competition prep.

This study was a first of its kind when looking at weight loss in normal weight women. The researchers mentioned that further research is needing to be done to see if there are any psychological changes that take place through strict dieting and fat loss for female fitness competitors. One must remember that female fitness competitors are not losing the weight for “health reasons” rather they are doing it to look aesthetically pleasing on stage to showcase musculature, symmetry, and overall muscular balance. So, for that reason it raises the question as to what their thought process is and if their weight fluctuation before, during, and after the show has a negative impact on them mentally.

Loading...
Newer Post
A Strong Cup of Mushroom Coffee with a Side of WTF?
Older Post
Will the 2017 New York Pro Leave a Mark or Fall Apart?