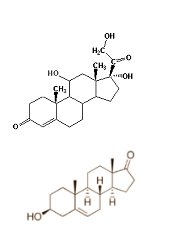 In small quantities the stress hormone cortisol is amazingly useful, but continuously raised levels of it are bad… for just about everything. We’ve been doing some digging around in old scientific journals, and fortunately there’s an easy way to reduce the amount of cortisol in your body by thirty to forty percent. Take 25 mg DHEA daily, and Bob’s your [anticatabolic] uncle.

25 mg DHEA/daily
The cortisol-reducing aspect of DHEA supplementation is not our own discovery. A reader sent us the YouTube clip below, in which Jeff Anderson advises men who want to lose fat in the chest area to take 25 mg DHEA daily. Fat deposition in this area is partly due to cortisol, says Anderson, and you can reduce your cortisol level by taking a low dose of DHEA every day.

Study 1
Whether men can actually lose pec fat by taking DHEA we don’t know, but the idea that DHEA supplementation reduces the cortisol level holds water. At least, we found a study done in 2003, in which researchers at the University of Pittsburgh got 69-year-old men and women to take 200 mg DHEA every day for 15 days. [J Clin Psychopharmacol. 2003 Feb;23(1):96-9.]

Supplementation started on day 8 and continued until day 22. The bars in the figures below show the amount of cortisol in the blood of the participants on each of those days. 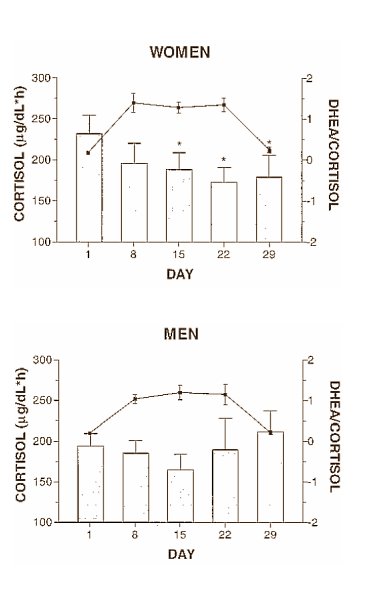 Study 2
A daily dose of 200 mg DHEA is on the high side. Researchers use a dose of 50 mg DHEA per day in most studies. In 2006 Italian researchers published the results of a study on the effect of a considerably lower dose of DHEA on cortisol levels. [Gynecol Endocrinol. 2006 Nov;22(11):627-35.] 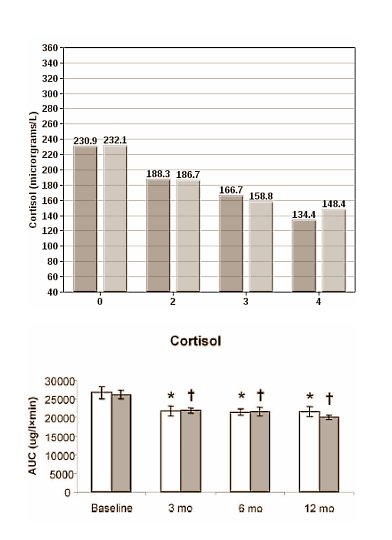 The figure above shows how DHEA supplementation may work. It shows the effect of the administration of 10 micrograms ACTH on the cortisol level, before administration, and after 3, 6 and 12 months. ACTH is the messenger hormone that stimulates the adrenals to release cortisol. ACTH secretion increases under stress. It seems that DHEA supplementation makes the adrenals less sensitive to ACTH.

Conclusion
If you’re thinking of trying to lower your cortisol level by taking DHEA, you’ll probably notice most effect if you take the prohormone before you go to sleep. During your sleep your DHEA level will peak. Your cortisol level will also peak while you’re asleep, so inhibiting the cortisol will be most effective at that moment. Sounds logical, doesn’t it?

OBJECTIVE:
The aging process is associated with a decline in the circulating Delta5-androgen dehydroepiandrosterone (DHEA) and its sulfate ester, dehydroepiandrosterone sulfate (DHEAS). The present study aimed to evaluate the effects of a long-term (12 months) oral DHEA administration (25 mg/day) on adrenal function, before and after 3, 6 and 12 months of treatment.

RESULTS:
DHEA supplementation annulled the age-related differences in DHEA and DHEAS levels and induced a marked increase in all steroids, except for cortisol, after 3-6 months of treatment. Serum cortisol levels decreased from the 3rd month, both in younger and older subjects. DHEA supplementation did not affect DXM-induced suppression of adrenal steroidogenesis. During the treatment period all adrenal androgens and progestins showed a significant increase in their response to ACTH, while the cortisol response decreased significantly. The results suggest a significant DHEA-induced change in adrenal enzymatic activities, as also evidenced by the change in precursor/product ratios during therapy.

CONCLUSION:
Chronic DHEA administration is capable of modifying circulating levels of androgens and progestins in both early and late postmenopausal women by modulating the age-related changes in adrenal function.