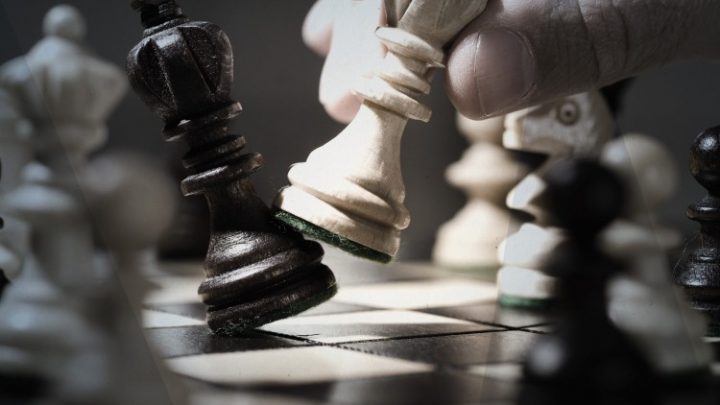 A recently published study examined the use of three commonly used cognitive enhancement drugs, using chess as the barometer. The results were…well…weird.

The first drug in the study was methylphenidate, which most people are familiar with under the trade name, Ritalin. Prescribed to annoying kids since the ’60s, Ritalin has become the most widely utilized pharmaceutical for the treatment of attention deficit hyperactivity disorder (ADHD).

Attention deficit hyperactivity disorder is thought to be related primarily to activities of the prefrontal cortex (broadly speaking). This is the part of the brain involved with so-called executive function, the high-level decision making stuff, but it’s also the area that determines our situational and social behavior. It’s where thoughts become actions that either bring us closer or farther away from our goals, based on whatever rules exist to govern those choices.

Methylphenidate blocks the dopamine and norepinephrine transporter, thereby inhibiting reuptake, resulting in their increased levels in the synaptic cleft (the space that exists between neurons)…think of these as helping to fill in the space between neurons, which should make it easier for them to communicate with each other, and therefore to focus.

If you’ve ever played chess, and tried to visualize a few moves ahead, then you know that ability to focus is rewarded heavily. So it makes a lot of sense that an ADHD medication like Ritalin would improve performance in a chess match.

The next drug in the study was modafinil {link to my modafinil article here], which is used heavily by people who put butter in their coffee and follow whatever trend makes them feel like they’re part of the in-crowd. Unfortunately, modafinil is not clinically approved to cure hipsterism, but rather as a eugeroic (wakefulness-promoting agent). So basically this is the kind of drug that we’d find prescribed for conditions that involve daytime sleepiness (think narcolepsy or whatever). Like methylphenidate, modafinil acts on dopamine and norepinephrine, as well as a myriad of other areas (many overlapping, some not).

The third drug in this study was caffeine. I’m going to assume you’ve heard of it and have a basic familiarity of its effect. We can split hairs all day on that one, but for our purposes here we’re going to consider it a drug; the favorite drug of college students studying all night for a test, Tour de France riders chugging it in an attempt to pedal faster, and one that is currently on the World Anti-Doping Agency’s chopping block [link: http://tass.com/sport/933900].

Here’s how the study went down: 39 chess players in a randomized, double-blind, placebo-controlled trial. The chess players received 400 milligrams (2×200mg) of modafinil, 40 milligrams (2×20mg) of methylphenidate, and 400 milligrams (2×200mg) of caffeine or placebo in a 4×4 crossover design. Then they played some chess (and completed several neuropsychological tests). Across the board from them was Fritz 12, a scalable computer chess program that was adjusted to the player’s individual skill levels (the neuropsychological tests were a standard battery).

The chess players finachettoed their bishops over two sessions totaling twenty games that each had a 15 minute time limit. minute games during two sessions against a chess program (Fritz 12; adapted to players’ strength). Ingestion each of these three drugs significantly increased average reflection time per game compared to placebo, and games lost to time expiring. But overall, the players still won more games with each of the drugs than with the placebo.

The big winner ended up being modafinil, with 388 games won and 309 games lost. Caffeine grabbed the silver medal with 383 wins and 317 losses, while methylphenidate was still significantly better than placebo but only managed 375 games won and 312 lost. 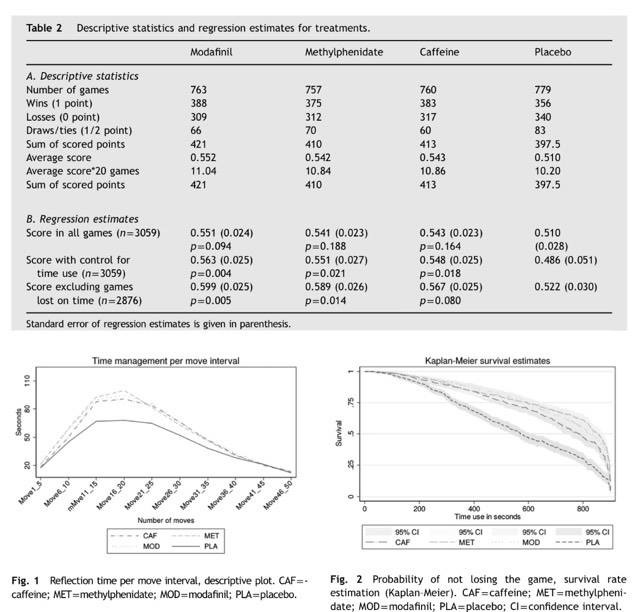 What we’re looking at in real-world numbers, is that Modafinil clocked in with a 15 percent performance improvement, methylphenidate gave the players 13 percent, and caffeine about 9 percent.

Without getting too deep into the actual results, or reading too much into them, it’s important to note that the size of the study itself isn’t particularly big. So while the results are significant, and I suspect that these types of drugs would benefit chess players, the statistical power of the study isn’t high enough to be absolutely conclusive.

I’m also going to guess that the scientists who designed this study aren’t chess players themselves. The computer chess program they selected has a handicapping system that doesn’t just play to the level of the setting, but gets disproportionately harder at the higher rankings. In other words, you’d imagine that a player with a 1800 ranking and a player with an 1100 ranking would be able to set the program to their own level and win about as often as they lose – but that’s not how it works, and there are a disproportionate amount of wins for the computer at the higher levels.

Besides testing these three drugs for their ability to increase performance at chess, the researchers also examined their ability to improve scores on a battery of neuropsychological tests – with disappointing results: 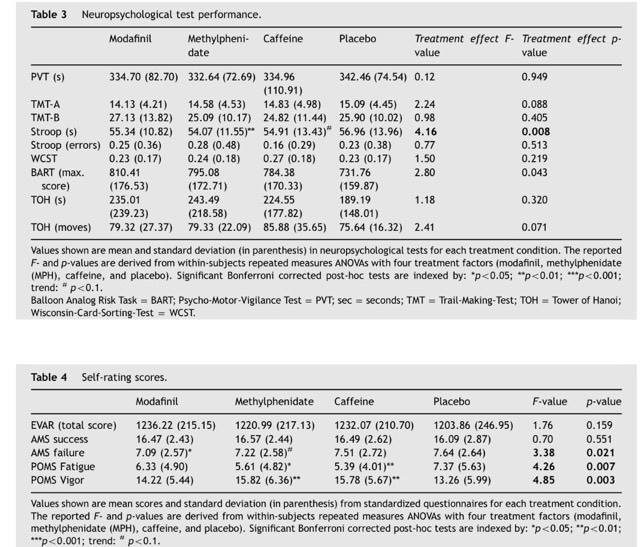 For the most part, the drugs weren’t better than placebo here. But it’s worth noting that the average IQ of the test subject was 128 (as measured by the Hamburg-Wechsler test, not some online nonsense that also tells you what Game of Thrones character you are, Lord Snow). Here, we’re looking at a group that’s almost two standard deviations more intelligent than the average person, and not the average biohacker, who is more likely two standard deviations in the other direction…therefore it’s not unreasonable that cognitive enhancing drugs may have different results in this population than the average person.

WorldChess.com reports that the authors of the study discovered that it’s widely believed within the chess community that these drugs are already being used (despite a doping policy that prohibits their use:

“It is possible that some players already use these drugs. As part of the research for the new study, Dr. Lieb said that he and his colleagues contacted 1,500 players in the German federation and had them fill out surveys. Based on those surveys, he said that they had some idea of the prevalence of the two drugs among the chess-playing population. “

I’d say that’s a good guess. In my experience, if there is a pharmaceutical advantage to be had, people are going to take it, regardless of the field of play.

In the end, I like this study. I think it provides a good foundation for thinking these specific drugs can give a competitive advantage to chess players and probably to anyone engaging in the type of mental lifting that might be similar.