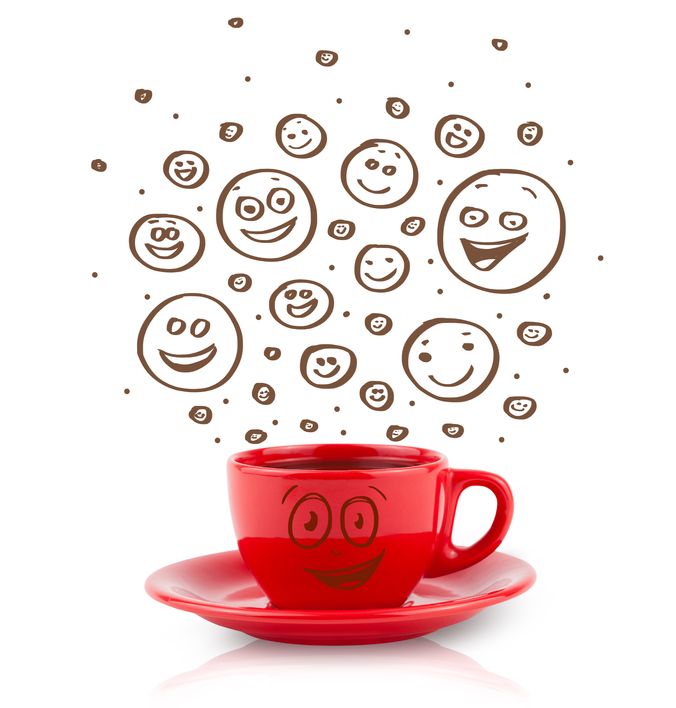 Women who drink a couple of cups of coffee every day are less likely to develop depression than women who drink no coffee. American nutritionists at the University of Harvard announced this in 2011 in JAMA Internal Medicine.

Study
The researchers used data that had been gathered during the Nurses Health Study, an epidemiological project that started in 1976, in which researchers closely follow tens of thousands women working in healthcare. The researchers monitored the women’s health and assessed the women’s lifestyle every two years.

For this study the researchers followed 50,739 participants between 1996 and 2006. At the start of the study the average age of the women was 63. The researchers looked at their coffee intake (80 percent of the caffeine consumed by Americans comes from coffee [J Am Diet Assoc. 2005 Jan;105(1):110-3.])), and asked whether the women were being treated by a doctor for depression.

The table below shows the relationship between depression and daily caffeine intake.

Mechanism
“Long-term caffeine consumption has several biological effects that should be taken into account when considering the plausibility of its potential to reduce depression risk,” the researchers wrote. “At low to moderate doses, caffeine has well-known psychostimulant effects, such as improved psychomotor performance, increased vigilance, elevated arousal (ie, lesser somnolence and greater activation), and increased sensations of well-being and energy.” [J Neurochem. 2008 May;105(4):1067-79.]

“The known effects of caffeine are dose dependent but typically biphasic (ie, low doses are perceived as pleasant and stimulating, but the reverse effect is observed with higher doses).” [Pharmacol Rev. 1999 Mar;51(1):83-133.]

“Most individuals seem to adapt their caffeine consumption to their own level of tolerance so that their habitual consumption level is within the range between reinforcing and aversive effects.”

“Caffeine affects brain function mainly by its antagonist action on the adenosine A2A receptor and, therefore, plays a role in the modulation of dopaminergic transmission. The antagonist effect of caffeine on adenosine also might imply nondopaminergic mechanisms, such as modulation of the release of acetylcholine and serotonin.” [Front Biosci. 2008 Jan 1;13:2391-9.]

Conclusion
“In conclusion, our results support a possible protective effect of caffeine, mainly from coffee consumption, on risk of depression. These findings are consistent with earlier observations that suicide risk is lower among persons with higher consumption of coffee. [Ann Epidemiol. 1993 Jul;3(4):375-81.] [Arch Intern Med. 1996 Mar 11;156(5):521-5.] Further investigations are needed to confirm this finding and to determine whether usual caffeinated coffee consumption may contribute to prevention or treatment of depression.”

Coffee, Caffeine, and Risk of Depression Among Women

Background
Caffeine is the world’s most widely used central nervous system stimulant, with approximately 80% consumed in the form of coffee. However, studies that analyze prospectively the relationship between coffee or caffeine consumption and depression risk are scarce.

Methods
A total of 50 739 US women (mean age, 63 years) free of depressive symptoms at baseline (in 1996) were prospectively followed up through June 1, 2006. Consumption of caffeine was measured from validated questionnaires completed from May 1, 1980, through April 1, 2004, and computed as cumulative mean consumption with a 2-year latency period applied. Clinical depression was defined as self-reported physician-diagnosed depression and antidepressant use. Relative risks of clinical depression were estimated using Cox proportional hazards regression models.

Caffeine (1,3,7-trimethylxanthine) is the world’s most frequently ingested psychoactive substance,1 with approximately 80% consumed in the form of coffee.2 However, its effect on depression is poorly understood and is understudied. To our knowledge, only 1 prospective study3 among men has examined the association between coffee consumption and depression risk, reporting a significant inverse association between coffee drinking and depression but no association with tea or other caffeinated beverages. In 3 cohort studies, 2 from the United States and 1 from Finland,4- 6 strong inverse associations have been reported between coffee consumption and suicide, which is strongly associated with depression, and a J-shaped relationship was noted for coffee and suicide risk in a Finnish cohort.6

Depression is a chronic and recurrent illness that affects twice as many women as men,7 and approximately 20% of US women will be affected during their lifetime.8 Identification of risk factors for depression among women and the development of new preventive strategies are, therefore, a public health priority. Thus, we accessed data from the Nurses’ Health Study, a large cohort of women, to examine prospectively whether caffeine consumption or intake of certain caffeinated beverages is associated with the risk of depression.