Newer PostTaking the Temperature of Classic Physique!
Older PostCentral Bodybuilding Episode 84
Share on FacebookShare on TwitterShare on LinkedinShare on Pinterest 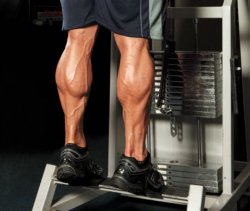 Most men and women who do weight training complain that they can’t get their calf muscles to grow. It’s not just their imagination, American sports scientists reported in the late eighties in Physical Therapy. The researchers got their subjects to train their calf muscles well for eight weeks, and observed that their efforts had no effect on the size of the calf muscle.

Study
The researchers got a dozen men and a dozen women to train their calf muscles on a machine like the one shown below, three times a week for eight weeks.

The subjects trained using a weight with which they could just manage 9-13 reps. Each training session consisted of four sets.

The subjects in the control group did no training.

Results
The subjects who had trained their calf muscles gained strength. The men built up slightly more strength than the women did, but the difference was not statistically significant.

The calf circumference did not increase as a result of the training. On the scans the researchers were able to see that the training had led to an increase of one millimetre in the triceps surae calf muscle of both the men and the women. This effect was not statistically significant either.

Effects of heavy-resistance triceps surae muscle training on strength and muscularity of men and women.