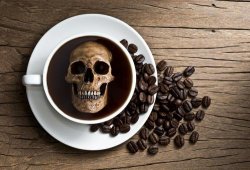 When researchers begin a study or trial, generally every piece of the study has been laid out and double checked to ensure the safety of the participants and subjects. However, Northumbria University just got slammed with a hefty fine for completely botching their calculations on their caffeine study.

Here in America, we love our coffee. Some of us don’t necessarily drink coffee because we like the taste—for some of us we drink it for the caffeine in the morning to get us going. While a normal cup of coffee (8 ounces) contains around 95mg of caffeine, some individuals will drink several cups in the morning taking their total caffeine content up to around 300+ milligrams. Most people who drink caffeinated beverages frequently can handle this dose while for others it can have serious consequences.

In the case of a study conducted overseas, researchers were making calculations on a smartphone. Unfortunately, no one double checked the figures before moving forward with the distribution of caffeine. The study was looking at what effects caffeine had on exercise. Each participant was supposed to get 0.3g of caffeine, but instead due to the miscalculation on the smartphone causing the decimal place to be moved, the individuals were given 30g of caffeine—100 times the amount they were supposed to distribute! When describing how much this truly is and putting it into perspective, it comes out to the equivalent of around 300 cups of coffee!

Due to the calculation error, the participants suffered life-threatening side effects and required dialysis. The attorney for the participants mentioned that there have been reported deaths of individuals who consumed 18g of caffeine, and this study mistakenly nearly doubled that dose. While there were only two participants for this study, things could have gotten much worse with a larger subject size and some cases could have even turned deadly if a participant had any underlying health issues that were not disclosed.

The school made a statement that they take the health and welfare of both their staff and students very seriously and apologized for the incident—this however, did not stop them from getting slapped with a heavy six-figure fine. Not to discount the calculation error, the school mentioned that they recently decided to make the change from caffeine tablets to caffeine powder for research purposes which could have created some of the confusion.

Overseas the European Food and Safety Authority (EFSA) states that there is no health risk for healthy individuals who consume 200mg of caffeine at one time or who consume up to 400mg per day. Pregnant women on the other hand should not consumer more than 200mg per day to ensure the safety of the unborn child.