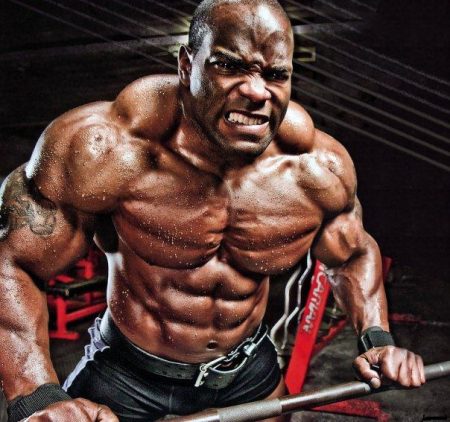 A small number of human studies, a large number of case studies and loads of animal studies have already shown that anabolic steroids are not good for the heart and blood vessels. American cardiologists have now published the largest human study so far on the effect of steroids on the cardiovascular system, and once again the results are not reassuring.

Study
The researchers examined the heart and blood vessels of 86 male steroids users who had been using illegal muscle strengthening substances for an average of seven years. All of the men were fanatical weight trainers. The researchers compared this group of users with a group of 54 non-users, who also did weight training, just as often and equally intensively as the steroids users.

Results
Anabolic substances such as steroids and growth hormone can cause abnormal growth of the heart muscle, particularly in combination with high blood pressure. The walls of the heart muscle can become too thick and stiff, and as a result of this the heart cannot pump as much blood around the body.

One of the measurements cardiologists use to express the capacity of the heart to pump oxygen-rich blood around the body is the left ventricular systolic ejection fraction.

The figure below shows that in nearly all non-users the left ventricular systolic ejection fraction was normal, but that this was not the case for a number of the anabolics users, in particular those who were using drugs during the study. The condition of the off-cycle users was less alarming, which suggests that during the period that users are not taking drugs the heart recovers to some extent.

The figure below is more alarming. It shows the amount of plaque in the vessels that receive oxygenated blood from the heart. The more plaque, the more clogged up the blood vessels are – and the greater the chance of a heart attack. The anabolics users scored noticeably worse than the non-users. 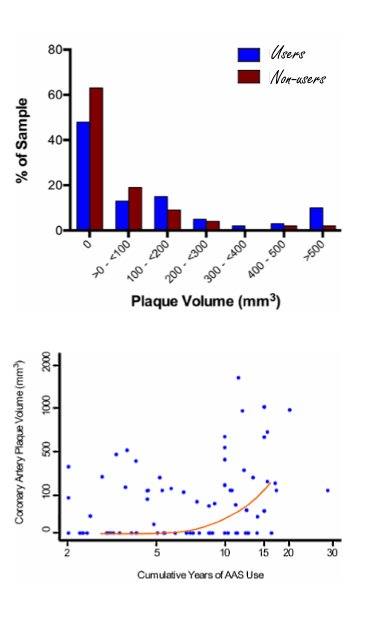 The amount of plaque that had accumulated in the blood vessels of the users increased the longer they had been taking anabolics. Few changes were visible in the first 6-7 years, but after that the chance of plaque deposition increased with every year that anabolics are used.

Conclusion
“Our findings suggest that anabolic-androgenic steroid use is associated with left ventricular dysfunction and premature coronary artery disease”, the researchers conclude. “These findings may inform public health initiatives to curb drug exposure and provide clinicians with information that will translate into improved patient care.”

Conclusions
Long-term AAS use appears to be associated with myocardial dysfunction and accelerated coronary atherosclerosis. These forms of AAS-associated adverse cardiovascular phenotypes may represent a previously underrecognized public-health problem.