Newer PostWhere You Keep Your Smartphone Affects Your Cognitive Functioning
Older PostNeed a Boost in Retention and Memory? Drink Alcohol
Share on FacebookShare on TwitterShare on LinkedinShare on Pinterest

I have to give credit where credit is due. Bader Boodai is quickly becoming one of the greatest, modern day innovators and pioneers of the sport of bodybuilding. From creating a bodybuilder’s paradise at Oxygen Gym, to working with cutting edge athletes like Big Ramy & Ashkanani, to now bringing, quite possibly, the most popular YouTuber on the planet to make a special appearance at the 2017 IFBB Kuwait Pro, Boodai has made an indelible mark on the sport.

Luimarco, on his behalf, scored a homerun, proving that his talents weren’t merely restricted to vlogging. Lui was featured in great video outtakes, interviews, and even popped out of a moving car, while chatting it up with the Ashkanani, who drove alongside him in a Lamborghini. This is the kind of footage any contest promoter could only dream of. It’s the kind of footage that will make the rounds all throughout social media, earning hundreds of thousands, if not millions, of views, and garnering immeasurable support for the contest, region, and sport. The question is, will more promoters network with social media stars, will more social media stars become fixtures at bodybuilding contests, and could we potentially see a change of the guard in the not-so-distant future?

Contest promoters invest a great deal of time, money, and efforts into ensuring they produce first class productions. Once sanctioning fees are paid for, they must pay for the venues, pay wages, and still cut a profit. These aren’t charities, so if money isn’t made, it’s unlikely shows will continue on. Many promoters have to be shrewd business people, they have to learn how to penny-pinch and if (& when) to spend. The key to making a profit is selling advertising, booth space, and tickets. The more fans who come, the more companies will want to be buy space and advertising packages. Whereas giant shows, like the Olympia and Arnold, can do very well, selling tickets to standalone events where fans can score bags of free samples, that’s a completely different situation than a promoter selling tickets to an competitive, physique-based show. No matter how many samples may be had, a fan is unlikely to spend $30-$50 on contest tickets, just for some free samples. Promoters have to work hard to sell tickets to both the pre-judging and the night show. They have to make sure fans are engaged throughout the entire event.

One great way to ensure ticket sales, is to have a large number of competitors. Some promoters will go out of their way for all divisions to be represented – and – allow crossovers. Generally, the friends, family, and co-workers of competitors will fill the seats. However, stopping there, is small potatoes. There’s a whole different class of the ticket-buying public. There are people who will come to a show, provided the right guest posers are hired, provided there’s a star-studded meet & greet, and a big expo. The hiring of a guest poser can be dicey for a promoter. They could hire a local pro or a little known pro & save some money. They could also hire a big name, miscalculate that person’s star power, and be out the money for the athlete and not see any noticeable change in ticket sales. 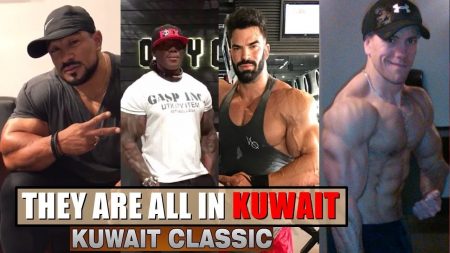 Far too many promoters fail. Guest posers, meet & greets, and even giant expos, aren’t enough of a safety net anymore. There’s simply too much at chance. The old way of doing things will only work so much. This is why thinking outside the box is so key. It always takes an innovator, a pioneer to see the bigger picture. In courting and bringing someone like Luimarco to a contest, Bader Boodai has introduced a new way to do things. He didn’t just bring Lui, he made his appearance into a highlight of the show. Bader took to social media, gave Lui the respect, and earned the support of his fans. This was a stroke of genius, because now, there will be no shortage of promoters, ready to book Lui, possibly Nick’s Strength And Power, and others. The demand is there, but the likelihood that YouTube stars will become fixtures at NPC and IFBB contests is less likely. The metal has to be struck while hot, and that’s exactly what Bader did.

Social media stars are just that. They do their work online. They’ve earned their appeal, gained their fans, and do their business on popular networking websites. Getting The L.U.I. to appear in public was a milestone, but it’s unlikely we’ll see him become a fixture backstage, at after parties, or hobnobbing with industry brass. The more we see social stars in real time, the less time they will have online. The more we see them in person, the less mystique there’ll be and the lessen their demand. Part of the reason Lui, The Hodge Twins, and Furious Pete are so big, is because the only place to see them is online. There’s a mystery involved and for many people, the only way to interact with them is via DM, inbox message, or email. This truly levels out the playing field – especially in an industry that many people is U.S. centered.

Further, another aspect of the draw that social media stars have, is their bluntness. People like them, because in their opinion, they’re on the fringes. They say and write anything they want. There’s no repercussions for them. Youtubers don’t have to worry about press passes, they don’t have to worry about industry norms, and they don’t even have to observe traditional notions of political correctness. In a very real way, vloggers and bloggers are seen as loose cannons. To many, perception is reality. If all of a sudden, vloggers are seen paling around with movers and shakers, their objectivity could fall into question. Everything, especially online, is highly subjective. Someone in the position of Luimarco, must guard every aspect of his stardom, or someone else will come around and take it. This is why it was strategic for Bader to be the one to get Lui at his event and why it’s unlikely we’ll see Lui at another show anytime soon.

In time, maybe months, maybe years, there could be a monumental change of the guard. Bob Cicherillo and Dennis James do great work MC’ing events. Lonnie Teper is a legend as well. But to someone in the 16-24 age group, the prospect of having Lui, Kali, or The Delray Misfits do the same job, would mean the world. It’s not so much that age is a factor, but moreso it’s about followings. The folks who follow YouTube stars are not the folks who follow traditional bodybuilding. Some may argue that comparing trendsetters to accomplished, professional athletes is wrong, but the right/wrong argument takes an immediate backseat to growing the sport and making money. I didn’t write the message, I’m must delivering it. Shows cost money, athletes need money, and fans want to be entertainment. For now, the status quo is working, but the younger generations may want something different – and soon!

There’s no question a change of the guard is coming, but the question is, who’s going to be in the driver’s seat (in terms of talent). I think supplement company moguls, media CEO’s, and deep-pocket investors could take a page from Bader Boodai’s playbook. From his gym, to his athletes, to his business practices, Kuwait City may very well be the future Venice Beach, CA. In fact, I’d count on it!