Newer PostThe Supplement Industry Is Now Enabling Alcoholics?
Older PostAre You A Gym Bro?
Share on FacebookShare on TwitterShare on LinkedinShare on Pinterest 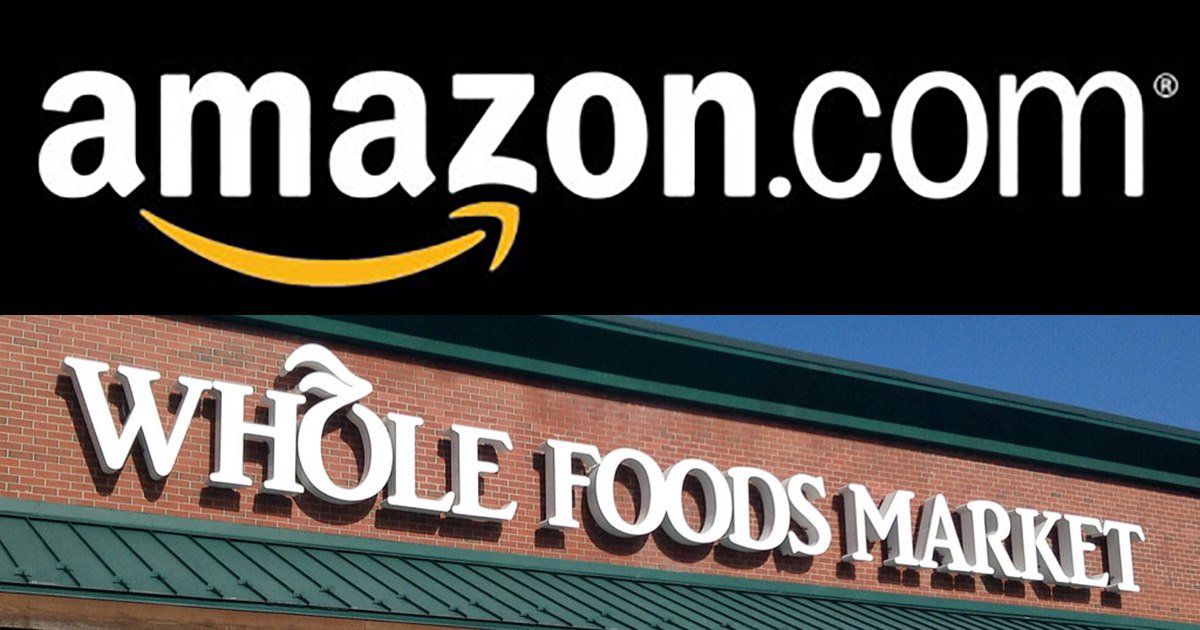 Amazon is now in the grocery business – sort of! Let’s just say that the world’s largest portal has officially expanded its holdings by adding a supermarket chain of more than 400 stores in the United States. The company dropped $13.7 billion for Whole Foods, the high-end supermarket chain which years ago led the way to bringing organic, quality groceries to the mainstream American market. While this investment may seem risky, given the ever-competitive world of retail groceries, it’s a drop in the bucket for a company like Amazon, positioning itself in an $800 Billion industry.

Further, this move may not be much of a gamble, it may not even fall into the category of venture capitalism. Whereas Walmart has driven many mom and pop businesses into the ground, Amazon’s razor-thin operating margins can cause even the Walmart’s and Target’s of the world – to worry – and worry frantically! Amazon gets the goodwill and brand-name recognition of Whole Foods, its existing stores and staff, and the ability to beat even the low cost giants’ prices. At first blush, this may seem good for consumers (paying even less for goods), but in the long-term, Amazon’s move may corner the market, leaving consumers in a very vulnerable position.

For most of us, shopping is a pretty simple process. Either we can scan our items or someone scans them for us, we pay, get a receipt and go on our way. American supermarket chains offer a great variety of products, sometimes offering anywhere from a couple brands to a half-a-dozen ones of each product. They use receipts for two purposes. One is for accounting and the other is to provide customers with a proof of purchase. Other than that, large grocery retailers don’t really analyze their customers or their purchases. Amazon, on the other hand, knows everything. They gather information on products searched, products browsed, and products purchased. They study how much a customer looks at an item, which suggested products they click on, and at what times of the day they buy. Whereas as a big-box store is clueless as to this information, Amazon has made its money by scrutinizing it inside and out. Their approach is so unique, that they don’t even bother hiding it. In fact, their back-end systems are open; don’t rely on proprietary concepts, and are ready be integrated at anytime. The giant grocery retailers can do little more than rearrange the deck chairs on the Titanic.

The writing’s on the wall. When news of this purchase hit, the entire trade took a major hit, with Kroger plummeting 28%. While news of major mergers and acquisitions always have an impact on the market, from speculators to brokers, the idea of companies losing as much as 28 points is unheard of. Kroger wasn’t an isolated story. The whole industry took a hit! These numbers could be just the tip of the iceberg if retailer giants like Kroger, Publix, Albertson’s & others start reporting quarterly drops in sales over time. This is because Amazon isn’t just buying Whole Foods; they’ll also have an existing store brand with which to do battle on their own shelves. Further, there’s a big question as to whether Amazon will reorganize the company, cutting manpower, benefits, and increasing online grocery sales which will throw the market into even more chaos. 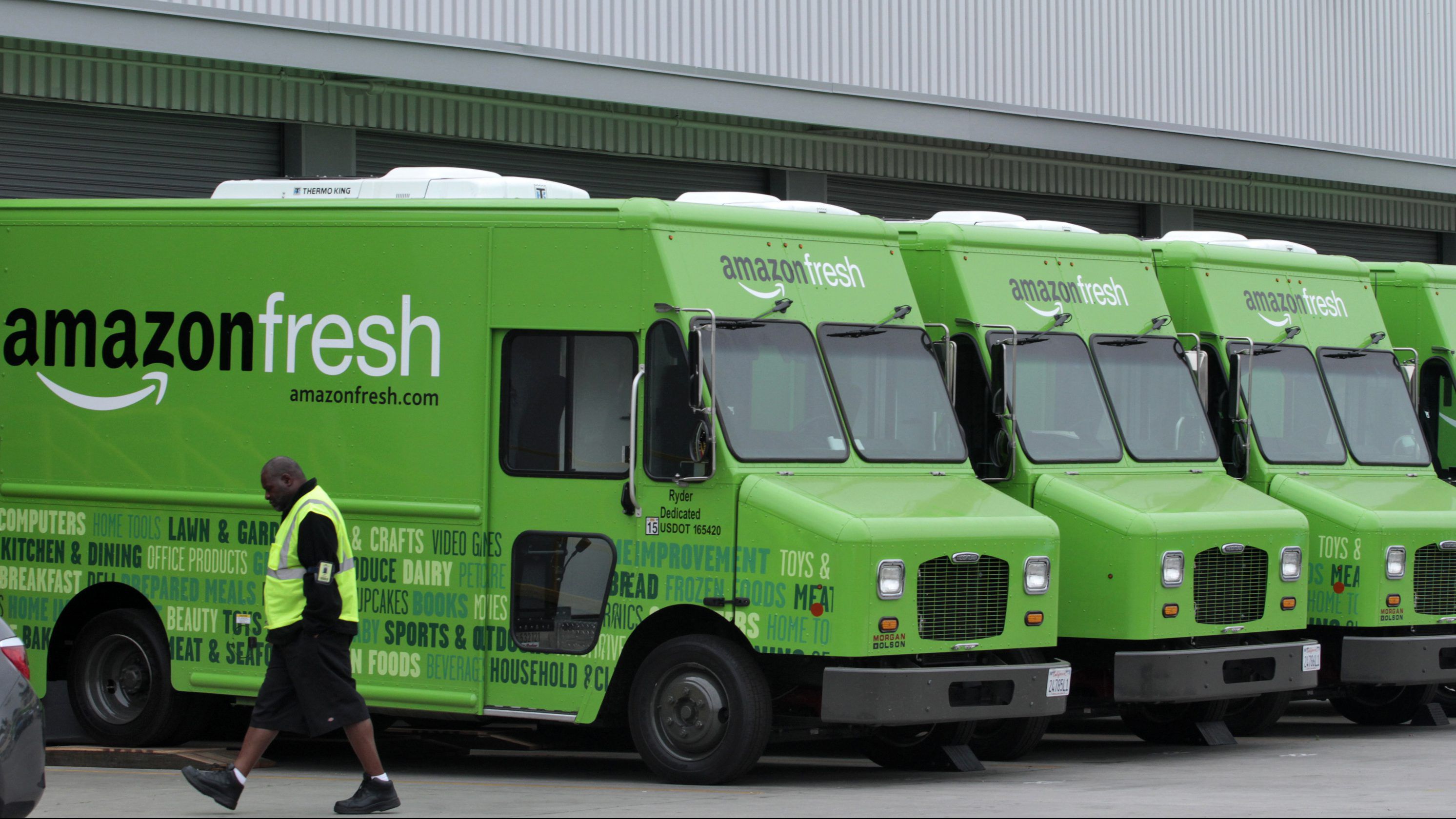 Online sales and low-cost, reliable shipping is Amazon’s bread and butter. No one can beat them at that game. This is why the company has its own grocery delivery service – Amazon Fresh. Existing supermarket giants couldn’t just come with an idea like this at the 11th hour and run with it. Change, while plausible for small businesses, is much more difficult for giant retail grocery chains who have limited online sales, no experience in shipping, and virtually no home-delivery options. In some major American cities, companies like Uber, which now deliver groceries, may also see their demand dry up. For example, imagine the possibilities of using Amazon Prime in conjunction with Amazon Fresh to deliver groceries to your doorstep for a one-time, annual membership fee. Amazon Prime could easily be used in conjunction with Amazon Fresh (and probably will be at some point in the future). Imagine doing your whole grocery run from behind your computer – or even – your smartphone?! Imagine if you’re like millions of Americans who basically buy the same products each week – what if you could simply hit a “re-order” button and be done! As opposed to clipping coupons, you’d find them online, and use them online – no printing or scanning needed. Delivery times could be set by the customer and transportation would always be on point. Imagine having all these benefits and potentially paying even less than at Walmart?! The big-box markets would be done for!

I’m afraid, these aren’t just theories. The competition is only going to get more fierce and if American giants can’t compete, then foreign players may step in. Aldi, a German supermarket chain, finds itself in a perfect position for the future. Its stores are smaller, its products are more in-line with researched trends, and its prices are statistically lower than their American big-box counterparts. Aldi has announced plans to remodel it’s nearly 1,300 existing stores in the U.S., as well as add another 900. Lidi, another German supermarket chain, just opened its first store here, just two weeks ago. It seems the Germans might have a fighting chance, along with Walmart & Target – both fighting to keep their business models afloat. It’s still unclear how Amazon will reorganize Whole Foods following the acquisition, but many believe they will scale down on cashiers – relying more on self-checkout machines, do away with baggers, and reduce the number of customer service personnel and stockers. This will undoubtedly hurt communities, as the better paying hourly jobs, once offered, will be no more. It will also hinder any chances of existing supermarket workers in other companies from negotiating higher hourly wages, benefits, and/or securing full-time employment status.

With Amazon involved in the grocery business, the next frontier for the portal, would be prescription drugs. Should Amazon get into this aspect of the retail market, then Walgreens, CVS, & Rite Aid will be in the same danger that retail grocery chains find themselves in today. While many supermarket chains have their own in-house pharmacies; Whole Foods always opted against it. Their approach was always to stay away from prescription drugs, opting for the more holistic approach of supplements, herbs, and organic products. Amazon could probably care less about Whole Foods’ mantra, though, looking at them as just another asset in their ever-expansive portfolio. 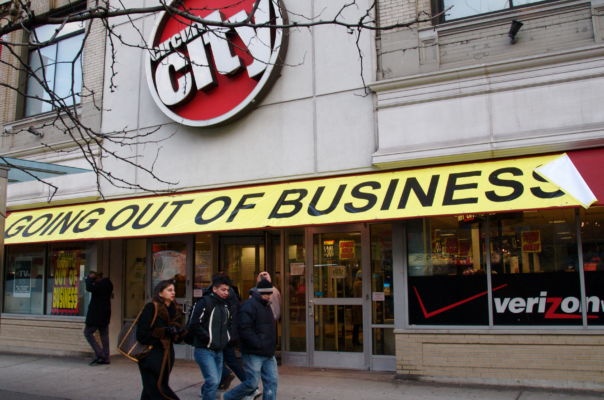 I’m not suggesting we bust out the Kleenex and start sobbing for the fat cats in the retail grocery & pharmaceutical-sales industries, but at least with the current model, consumers have options. When a company like Amazon gets involved, consumers win in the short-term b/c the name of the game is low cost goods. I’m not talking about crap products sold for cheap; I’m talking about price drops on name-brand goods. Lower prices are great; however, when the big name stores can no longer compete, they’ll fold. Much like many of the mom and pop shops of yesteryear, big name supermarket giants will go the way of the dinosaur. In time, Walmarts and Targets may have to get out of the grocery business, returning to their pre-1990’s form. But what’s to say that would work anyways? No one can beat Amazon at selling appliances – Circuit City learned that the hard way & Best Buy concept stores came & went. Fixing cars doesn’t pay the bills either – sorry Sears! If you take electronics, car repair, and groceries out, what will Walmart and Target sell? Amazon is also huge into clothing as well. In fact, many designers offer their fashions directly on the portal, cutting out retailers altogether.

What happens when Amazon monopolizes grocery shopping? What then? What happens when Amazon owns everything? The next concern is what happens when name-brands can no longer compete with Amazon products on Amazon-owned shelves & webspace? If price points are too high, goods won’t move, and companies will be booted from the marketplace. Oh that’s right, let’s not gloss over this key detail. The old supermarket approach would allow for poorly performing products to stay on shelves, if, for example, they were were made by a huge company with successful products elsewhere in the store. The new trend will boot products that don’t move, irrespective of what company they belong to.

Further, what happens when keeping stores open becomes too expensive and investors clammer to turn existing facilities into warehouses? Then customers won’t have a physical place to shop at; they’ll only be able to shop online. What was once a convenient option might become the market-imposed sole way to browse and buy groceries. This would be a great example of the aforementioned consumer vulnerability to come.

It should also be noted, that the single biggest factor to allowing Walmart to sell so cheaply up until now, has been the sheer volume with which it orders; however, ordering with great volume also brings with it, great waste. For most of my life, a gallon of milk has cost around $3, eggs have cost between $1-$2 a dozen. Today at Walmart, consumers can buy milk for 95¢ a gallon and a dozen eggs for 50¢ – $1. This is because they have far more supply than demand. They can operate like this, b/c all they’re up against are overpriced supermarkets with big operating costs. Amazon has the ability to play the quantity game too, but they’d rather stock only what sells and just enough to avoid dropping prices or even having to implement sales to move their goods. This is why Amazon will easily corner the market and eventually monopolize it.

Amazon’s corporate culture detests waste. This is why they may find more profits in simply pushing their nearly acquired store brand product lines in smaller markets and use the Whole Foods buyout as a way to get into retail pharmaceuticals. In fact, the small, successful groceries like Aldi and Lidi, may find themselves as little more than Amazon distributors in the future. Perhaps, the portal will see no benefit to having physical stores and may instead allow micro markets to survive, provided they cover operating costs and sell only what the online giant tells them to. I honestly don’t see any other way for supermarkets to stay open, with what I believe is to come.

Sadly, there’s no happy ending to this article. Amazon is here to stay. It will only grow bigger, richer, and more influential. Although big-box grocery stores may try to change with the times (e.g. getting to know their customers and stocking shelves accordingly), it’s very unrealistic to think they’ll catch up to Amazon’s level any time soon. Hopefully some of the theories here won’t come to play, but banking on that is very naive. Buying power won’t mean much, when all you can buy is what Amazon lets you.