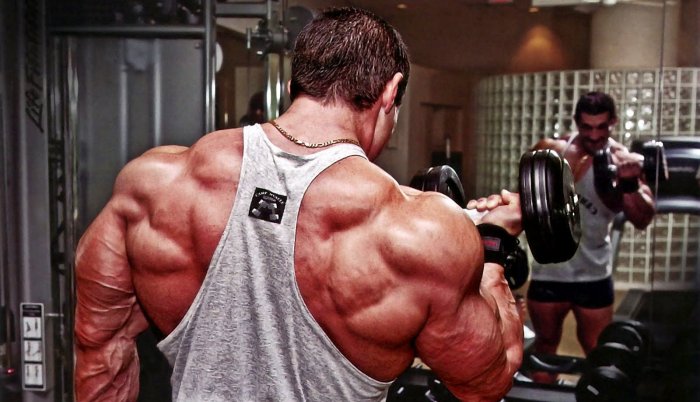 The many false assumptions and cruel comments made in regards to bodybuilders generally stem from two different places. These two places being insecurity and jealousy. It is easy to see how a 5’11” 270 pound man with single digit body fat levels and a 31 inch waist could make a “normal” man feel insecure about himself. Jealousy, coming from either a man or woman, tends to elicit similar responses as insecurity, being that insecurity is often times the cause of these bouts of jealousy. The knee-jerk reactions of a jealous person, with regards to an impressive bodybuilder generally include, “Yeah but he has a small penis from all the steroids”, “he probably can’t even wipe his own ass”, “that is all steroids, he will be dead at 40” and “He is probably as dumb as a box of rocks.” Then you have the same kind of knee-jerk female reactions to other females who are muscular, or in extremely good shape. The most famous of these reactions being “she looks like a man!”. All of these statements are completely wrong, of course. Although that is not surprising, seeing as when you fail to think before you speak, then speak out of pure jealousy and insecurities, accuracy is rarely the outcome. Make no mistake, there are some seriously dumb bodybuilders out there. There are also many bodybuilders who do in fact get a little bit too big, to a point that hinders their ability to move around gracefully, or in the case of a female, makes them look like man. However, these individuals are rare exceptions, and far from the norm.

Often times a person who possesses stellar physical genetics will coast through life using their looks and/or body to make friends, be accepted and/or succeed. The problem with this physique-based life is that these individuals will fail to build a respectable personality, strong social skills or a strong mind. This paradox is also seen in beautiful women. Everyone knows a beautiful woman who is not the sharpest tool in the shed, possibly even the dullest tool in the shed, yet is still very successful. There are several reasons why a person could become reasonably successful based almost entirely on being an extremely attractive women, or a man with a naturally great physique.

Unfortunately, interactions with these select individuals tend to stick in the minds of the general public like Super Glue, while run-ins with the polite, brilliant bodybuilders get looked over. This is a similar cause and effect to what is seen in the general portrayal of professional athletes. What this means is that hundreds of people can meet a given athlete with the result being a pleasant, respectful encounter and little fuss is made. Whereas if only one person has a negative experience with this athlete where he or she is rude or angry, the news of this meeting spreads like wildfire, significantly tarnishing said athlete’s reputation. Positive interactions are simply expected of the athlete, and are therefore looked over, while the very few negative examples garner significant negative emotions from the fans. Bodybuilding fans tend to sway their opinion one way or another in a drastic fashion due to the personal connection that is often times felt between a fan and a high level bodybuilder, a personal connection not always seen in other sports.

This same phenomenon of dwelling on the negative is also partially to blame for women thinking any female with muscle is “manly”. Everyone has seen a photo or two of a female bodybuilder who has juiced herself to the gills for fifteen years, and is now two hundred pounds of shredded, vein-ridden muscle, and sporting a jaw like Mike Matarazzo. People love to share such photos around and talk about how gross it is, as well as all the mental issues said woman must have. Fine. I do not disagree. The problem is, this ridiculousness just adds to the idea that muscular woman are gross, which could not be any further from the truth. That said, anyone with any real sense can see that the true root of these cruel comments, again, is simply jealously and insecurities. What else would cause a fat lazy woman to say such hurtful things about a hot girl with beautiful muscles and a tight waist? It is actually quite funny. These women sitting on their couch watching Oprah, picking cheese curls out of their sweaty fat rolls and calling hot ass fitness chicks who work hard and show discipline everyday in order to look great, “gross”. Right, like you wouldn’t swap bodies with that “gross” hot fitness chick. You aren’t fooling me, Bessy.

The topics of being “muscle bound” or “having a small penis” are both pretty hilarious as well. These fallacies are believed by pretty much everyone, through brainwashing, lies and general stupidity. I have seen and heard with my own eyes and ears, men who are 5’10” 265 pounds claim that a bodybuilder who is also 5’10” 265 pounds “probably can’t even wipe his own ass.” Really? So, your fat ass with your 47 inch waist can move around just fine, but the bodybuilder who is the same height and weight as you, but has a 33 inch waist, can’t move? You sir, are dumb. If you think about it, as a man, if one sees another man who is way more muscular than him, way leaner than him, has way more discipline than him, and could tie him into a pretzel at any moment with his vastly superior power, what does one say? Insecurities flow through the “normal” man’s veins like water through a fire hose, and he must shoot out some offensive nonsense in a pathetic attempt to belittle this sculpture of a man, in order to make his skinny fat self feel better. I mean, let’s be honest, unless the stronger, better looking, more disciplined, jaw-line-having, six-pack-owning man is a convicted felon or woman beater, what else can Harry The Hippo say? All his moon faced ass can muster are ridiculous comments like “he probably has a small dick”, or “he probably can’t wipe his own ass”. For the record, steroids do not make your penis smaller, in fact, they tend to make it slightly bigger via enhanced blood flow. So, you lose all the way around Harry.

Planet Fitness, or as I like to call it, and more accurately, Planet Fatness, has created an entire company based off these exact insecurities. This is done with a basic slogan of “Do not worry, we do our best to deter hot women and jacked men from coming through our doors, so your fat sloppy ass will never feel uncomfortable.” They pitch this pathetic business model through openly condescending television commercials, as well as serving junk food at the gyms on a daily basis and not allowing members to lift “too much weight”. As stomach turning as this business plan is, it is a brilliant one. Planet Fatness is fully aware of the jealousy and insecurity that runs through a large portion of the population, in regards to men and women who are in fantastic shape. Creating a false portrayal of bodybuilders is a must in this particular business strategy. Imagine if Planet Fatness ads told the truth about bodybuilders? “We discourage any person who routinely reaches his or her goals, is consistent with their diet and exercise, and can be proud of what they have accomplished all on their own”. When it comes right down to it,
this statement is really a mirror image of what Planet Fatness is projecting. Delivered in this manner however, it would probably draw in far less pizza and Tootsie-Roll loving heavyweights, and unfortunately, this demographic of people make up the vast majority of America.

Nearly all men and women wish to have either more muscle, less fat, or both. Interesting how 97% of these people are unable to accomplish these goals, while all the dumb, mental case bodybuilders do it in stride day after day, week after week, and year after year. Many professionals in the health and nutrition community are also incapable of changing their body composition in the direction which they want. From a purely superficial standpoint, it is obvious that bodybuilders are much more intelligent when it comes to implementing nutrition and workout knowledge than any other demographic of people. Of course, there are several other important factors that go into looking like an impressive bodybuilder outside of nutrition and fitness knowledge, making this superficial example not entirely conclusive. Luckily for the bodybuilding community, this physical example is only one example of many, in regards to why bodybuilders are the cream of the crop when it comes to knowledge in these topics.

Bodybuilders are also some of the greatest, most high-end personal trainers on the planet, and possess an uncanny ability to come back from horrendous injuries that would leave most normal people unable to ever walk or properly function again. Men like John Meadows, Chris Aceto, Chad Nichols, Dave Palumbo, Ron Noreman, etc. are the best trainers on earth, all things considered. All of these men are, or at least were bodybuilders, and come entirely from bodybuilding. All of these bodybuilders have trained excessively famous individuals who have access to any trainer in the world, but opt for these big dumb meatheads, how fascinating! No demographic of people are able to apply nutrition and training knowledge like bodybuilders. Knowing the facts is one thing, being able to apply these facts and get others to apply them is a whole other story, and this is where bodybuilders truly shine.

There is no doubt that many bodybuilders lack good personalities and/or a high level of intelligence, which is no different than any other professional sport. However, there are far more bodybuilders who have a wealth of knowledge in their field that goes far beyond what most people can even imagine. The underlying issue on the topic of bodybuilders being dumb, fitness chick being manly, or men being “muscle bound” is really just insecurity that is perpetuated by negative people who are unsatisfied with their own lives. Even if bodybuilders were in fact dumb drug addicts who could hardly move, harping on it and ridiculing them will not help you succeed personally, nor will these negative comments stop or persuade bodybuilders to change their ways. You may not like how a bodybuilder looks or how they choose to live their life, but at least they are doing what they love and making progress towards a goal, which is more than can be said for nearly every person who jealously criticizes them.