Where Did We Go Wrong? 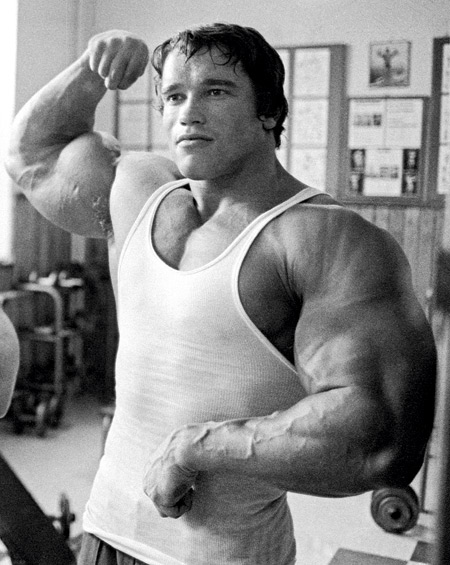 Once upon a time, the most sought after physique on the planet was that of Arnold Schwarzenegger. Arnold dominated his onstage competition and inspired millions to begin their own bodybuilding journey. This level of domination and inspiration came mostly via The Oak’s massive arms, delts and chest. It is not hard to figure out why, as these particular body parts, along with abs of course, happen to be the three that are most often envied by others. Large chests, shoulders, and arms are almost always the goal of a person who is just starting to train with weights. This shared goal was the case forty years ago, and it will remain this way well into the future. That said, why is it that when Phil Heath and Big Ramy walk onstage at the Mr. Olympia today, we all wait with bated breath for them to turn around so that we can analyze the conditioning of their back sides?

This is not the first time that I have brought up the ridiculousness of bodybuildings current obsession with not only a dangerous level of conditioning, but how shredded competitors are able to get their asses, in particular. This “shredded glutes” phenomenon, in my opinion, is a bad thing, for several reasons. First and foremost, putting a large emphasis on the level of body fat covering our athletes asses, via thong-like trunks, is probably the worst thing for our sports mainstream appeal that I can possibly think of. The level of condition that the modern bodybuilders reach, from a mainstream outlook, is bad enough as it is, without obsessing over the glutes. To quote bodybuilding legend Lee Priest, “As a young bodybuilder, I wanted arms like Robby Robinson, I wanted legs like Tom Platz, I never looked at a guy’s ass and said that I want my ass to look like that!”. Lee makes a very good point. How many young bodybuilders have pictures of shredded glutes hanging on the wall in their bedrooms? They have images of Arnold hitting a front double bicep pose, or Ronnie Coleman dead lifting 800 pounds, no male bodybuilder ass shots, I can assure you.

Most people are under the impression that the sheer size of today’s bodybuilders is what makes mainstream acceptance an impossibility. While this is true in a way, it is not the whole truth, not at all. The main reason for the general public responding to a professional bodybuilder with the oh so common statement of “ew”, is conditioning. A body that appears to be void of skin, to a normal person, is gross. It’s really not hard to understand why. With our current obsession with shredded glutes fully in place, competitors are forced to reach a level of conditioning that, for all intents and purposes, looks pretty bad. The word “grainy” is used in a positive manner to describe the hardest guys in bodybuilding. How many people do you think strive to have a look that causes people to describe them as grainy? This grainy appearance is only desirable to the true, hardcore, bodybuilding die-hards, a demographic that makes up an immeasurably small percentage of the population. One of the reasons everyone loved Arnold’s physique was because he was very lean, but you were unable to see every single one of his veins. Many of today’s bodybuilders are so vascular that the veins actually serve to hide these athletes level of muscle separation. Ironically, muscle separation is arguably the most desirable side effect of being lean.

There is a new problem that professional bodybuilding is running into that nobody is really talking about. This problem being great bodybuilders refusing to compete regularly, or at all for that matter, because of the excessive stress that contest prep puts on the body. Evan Centopani and Jason Huh come to mind. One of the main reasons for this unfortunate scenario is this foolish over emphasis on shredded glutes. Getting the body to a degree of leanness and more importantly, dryness, that allows for “shredded glutes”, is downright dangerous, plain and simple. Many bodybuilders have died in the hours leading up to, or directly after competitions, as they attempt to dry themselves out until they have clear lines in their butt cheeks. Kind of a silly reason to die when you think about it. Putting one’s life in danger to achieve an ultra lean rump, a physical state that in most cases will only last a couple of days. You really can’t blame guys like Evan and Jason for not wanting to partake in this charade, known in bodybuilding circles as “peaking”.

The most efficient way to pinpoint the next issue I have with focusing so heavily on glute conditioning is to run it by former IFBB professional bodybuilders Toney Freeman, Troy Alves and Melvin Anthony, to see how they feel about it. All three of these bodybuilding elites would agree that this issue is not only a bit silly, but that it is also unfair. Glute condition, to the degree that is expected in today’s pro ranks, is largely genetic. Now, you may be thinking to yourself that the development and condition of all body parts is genetic, not just glutes. While this is true, not all body parts are created equal in regards to the extent to which genetics determine how well they grow, and or how easily they get lean. To put it into perspective, putting such a large emphasis on glute conditioning is similar to if the judges were to put that same amount of emphasis on calf development. Any person who knows anything about bodybuilding would agree that allowing the development of competitor’s calves to drastically affect the judging would not really be fair.

Some bodybuilders, Flex Lewis for example, can achieve shredded glutes very easily. In fact, on a competitor like The Welsh Dragon, glutes tend to get very lean before the rest of the body. The aforementioned names Freeman, Alves, and Anthony, are on the other side of the spectrum in regards to glute conditioning. Toney, Troy, and Melvin all did everything in their power to achieve this new gold standard of conditioning, but to no avail. Troy in particular would routinely display a level of back detail and condition that was unmatched, only to slip in the places because he lacked deep grooves in his butt cheeks. Melvin had one of the best backs in the business, along with arguably the smallest waist in the entire professional ranks. However, just like in the unfortunate case of Troy Alves, he would get beat by guys with far less impressive physiques, because they were able to display ripped glutes and hamstrings. Toney Freeman, as far as I am concerned, could have easily won the 2008 Mr. Olympia had he been sporting Phil Heath-like glute detail. Toney is 6’2”, with a tiny little waist, wide shoulders, huge quads, along with unmatched presentation and professionalism, yet all of these qualities were constantly overshadowed by the fact that he did not display deeply cut glutes.That math just doesn’t add up.

With the advent of the new classic physique division, this glute obsession may be rectified to a degree. That said, this new division is not really even a “bodybuilding” division. Even today’s smaller open pro bodybuilders are far too big to fit into this new class. In a perfect world, the open division would be judged in a manner that forces the competitors to look more “classical”, focusing more on the Arnold-esque qualities and less on looking like a mutant lab experiment, instead of creating an entirely new division. In this hypothetical perfect world, we would also change the way that the trunks fit so that they cover the glutes, dowsing the current wildfire that is the need for shredded glutes in order to do well in professional bodybuilding. These simple changes would make our sport far more attractive to outsiders, level the playing field, and most importantly, improve the health of our athletes.