What Causes Us To Become Bodybuilders?

by Geoff Roberts Despite what many skinny-fat guys may claim, the overwhelming majority of men wish to be large, muscular, and lean. The same c 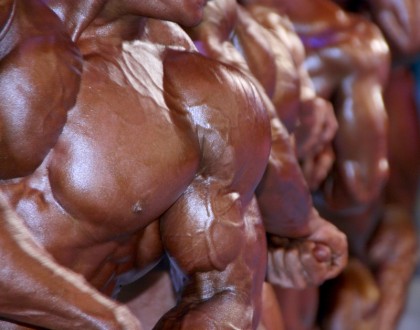 Despite what many skinny-fat guys may claim, the overwhelming majority of men wish to be large, muscular, and lean. The same can be said for what most females prefer in a man as well. A girl with a scrawny boyfriend or husband might claim that she prefers scrawny guys from a sexual standpoint, however Mother Nature tells us she is lying. That said, very few men will desire this muscular physique intensely enough for them to actually live a lifestyle that results in such a physique. These few men, for all intents and purposes, are called bodybuilders. If most all men wish to look like some variation of a bodybuilder, what is the difference between men who actually go through with it and the massive group of men who try it and fail, or never even try it at all? More times than not, the specific reasons for this phenomenon come via certain childhood hardships, photos contained in certain books and/or magazines, training for a sport, and last but certainly not least, the early 70’s through the early 2000’s version of Hollywood. This was a magical, and dearly missed period of roughly three decades when the film industry was not afraid to showcase large and/or ripped, vascular physiques.

Most of us have read or heard the story about the ninety pound weakling who was bullied, so he took up weight training, bulked up, and overcame these same bullies. There is a very good reason that this little tale resonates so loudly in many people’s minds. Bullies are a real thing and unfortunately, so are unfair genetic traits, such as being a 5’3’’ grown man, a predisposition to being a fat kid, gynecomastia, etc. As a young kid who has to put up with being bullied nearly every day, you either accept it, have low self-esteem the rest of your life and avoid social situations, or, a la the ninety pound weakling, you do something about it. Seeing as most bullying comes via superficial aspects like the ones mentioned above, the logical cure for the bullying is to work out, and alter one’s diet, in an attempt to remedy the physical aspects that are getting one bullied. Herein lies one of the most common reasons that a person becomes a bodybuilder. While training and eating in a fashion that this bullied individual feels will make them leaner, bigger, or both, they discover bodybuilding, and the rest is history.

The second most common situation which leads to a person becoming a bodybuilder, is one that is quickly becoming obsolete. The discovery of overly muscular bodies on the pages of comic books and/or muscle magazines. As we all know, both of these entities are on a series decline in response to the overwhelming force that is the internet. Due to the advent and explosive expansion of computers and the internet, print magazines and comic books are simply not practical anymore. However, this was not always the case. Quite the contrary. Comic books were hugely popular with kids in the near past, and one of the most recognized collector’s items of all time. The otherworldly, muscular physiques found in most comic books, ironically, often look to be modeled after the way that professional bodybuilding competitions are judged, despite many of these comic figures being much older than the rules of bodybuilding. Action figures should be thrown into this category as well. In my personal case, action figures played a larger role in my early obsession with muscles than did comic books. Of course, they were often times the same exact characters. Action figures however, give young kids a three dimensional look at these awe inspiring physiques.

Muscle magazines need no introduction in regards to this topic. For several decades, the most mainstream aspect of bodybuilding was the prevalence of its magazines being for sale just about anywhere. Just a few short years ago, it was nearly impossible for most people to not come across a muscle magazine at some point early on in their lives. This being the case, it is easy to see why the physiques of men like Lee Haney, Dorian Yates, Kevin Levrone, Flex Wheeler, and Shawn Ray sometimes had a life changing effect on young people, when they inevitably laid eyes on these legends hitting classical shots on the covers of muscle magazines. The number of bodybuilders who have found themselves entrenched into our superficial world as a direct result of weight room sessions assigned by a coach in school, is also vast. How many times have you heard a professional or high level amateur bodybuilder claim during an interview that he or she was training for a given sport, only to fall deeply in love with the weight training and leave said sport behind? The catalyst to this turning into competitive bodybuilding is often an injury. Many IFBB professional bodybuilders once had their dreams of stardom crushed by a career ending injury, most commonly in football, forcing them to take their love for competition in a different direction.

The single most frequent reason that the bodybuilders we know today made such a life altering decision can be summed up in two names: Sylvester Stallone and Arnold Schwarzenegger. While there are still mainstream films that feature large muscles, they are few and far in between these days, and let’s be honest, no modern actor looks anything like the great Arnold Schwarzenegger did in the 1980’s. The late 1970’s and 1980’s were indeed a magical time for us bodybuilders, in regards to Hollywood movies. Rambo, Rocky, Commando, Predator, and the like. I can remember many nights as a kid, watching a Rocky movie and doing push-ups in my little room at my parent’s house. I dreamed about having ripped abs and big arms like Stallone did in the Rocky films. Of course, it wasn’t just Stallone. All of Rocky’s opponents held claim to physiques that were just as good, and sometimes even better than Stallone’s. When comparing these bodies to the bodies we see in similar movies today, is pretty sad. In the sixth rendition of Rocky, entitled “Rocky Balboa”, Rocky’s opponent is skinny, and literally has bitch tits. Even worse, the same exact thing can be said about the opponent of Apollo’s son in “Creed”, the most recent Rocky film!

Even more influential than these Rocky movies were and are the many ageless Arnold films. For some it was Conan, for others it was Commando. The Arnold movie that struck a cord loudest in me as a child was Predator. No man, in any endeavor, managed to inspire more up and comers to attempt his craft than Arnold Schwarzenegger did. Not only did Arnold have a near perfect physique, but he released an aura of great confidence and success with every scene he was in. His characters were extremely powerful, very intelligent, and successful with the ladies. What more could our young minds ask for? In a similar fashion to how injuries catapult iron-loving athletes into bodybuilding for good, the priceless film Pumping Iron is often the straw that breaks the camel’s back, sending Arnold fans deep into the bodybuilding rabbit hole. In my case, it started with Rocky and Predator, and when I saw Pumping Iron at 18 years old, that was all she wrote. When looking at the widespread popularity of Arnold movies, which caused these widespread Arnold fans to eventually stumble upon Pumping Iron, the most influential bodybuilding movie of all time, it really was a perfect storm for inspiring the next generation.