Was Bodybuilding Conditioning Better In The 1990’s? 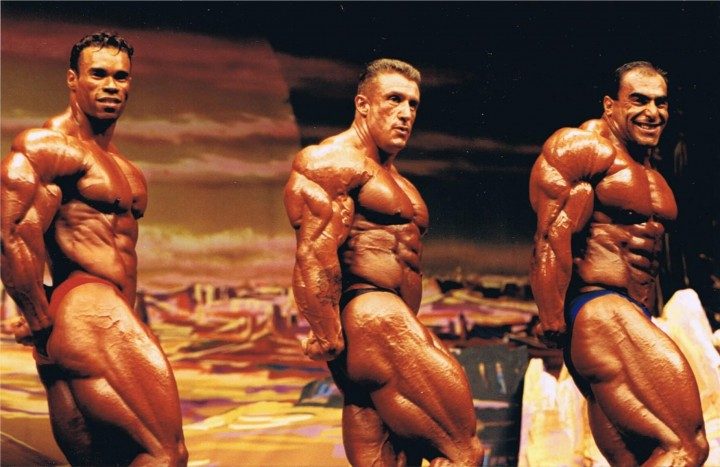 Was conditioning better in the 90’s? It’s a simple question to be sure, but depending on whom you ask you may very well receive a different answer. It would be one thing if this lack of consistency was present only when comparing the answers of newbie’s and long-timers, or fan-boys and industry experts, but disagreement seems to persist even when comparing answers from those of similar age groups and experience levels. Why is this? One could be forgiven for thinking that with something so cut and dry (no pun intended), that at least the more experienced members of our community would be able to come to some type of general consensus, yet even this group lacks clear conformity of opinion.

Part of the reason for this is that conditioning, or more specifically, what it means to be “in condition”, has never been clearly defined. Despite each one of us being able to list a dozen or so different attributes normally associated with the term, I have found that their order of priority tends to differ among individuals. Furthermore, not everyone has the same view when it comes to which traits should be included in the definition. Obviously, this can cause two people to see things in a very different light.

One person who seems to strongly favor the old guard is Kevin Levrone, who, since announcing his decision to compete at the 2016 Mr. Olympia, has been very vocal regarding his belief that the 90’s pros displayed superior conditioning. In fact, at one point or another most of the top 90’s pros have voiced a similar opinion. But what do today’s pros think? From what I have seen the current crop appears to think the exact opposite—that today’s top bodybuilders represent the pinnacle of conditioning; a new level of overall shreddedness that the last generation just can’t touch. As for how I see things, I think both sides have a valid point…because as stated above, one’s belief regarding this matter is predicated not only on how the term is defined, but on the prioritization of those traits that comprise it.

According to the most basic definition, conditioning is determined by only two factors. These are bodyfat and subcutaneous water. Decreasing one’s body fat percentage and sub-q water levels is the primary focus of bodybuilders at all levels of competition, as success in these areas will largely determine how conditioned someone looks onstage. However, these aren’t the only variables which play a role in determining one’s perceived level of conditioning. Other factors, such as the degree of muscle hardness, fullness, density, vascularity, separation, striations, skin thickness and others can have a big impact on one’s final appearance, making the individual look significantly more or less conditioned than he actually is. This is why two people could possess the exact same bodyfat percentage and sub-q water levels, yet one might look significantly more shredded than the other.

Some of these factors are genetic, while others can be enhanced with drugs. Some are dependent on diet, and a few are even affected by one’s training. But the bottom line is that when most people evaluate a physique’s level of conditioning, they are looking at the sum total of all these qualities, rather than the individual’s bodyfat percentage and sub-q water level alone. With that said, what are some of the differences between today’s pros and the guys from the 90’s? Perhaps more importantly, what are the reasons behind it? Before I answer these questions the first thing we need to understand about generational comparisons is that it does not involve just a few guys. In other words, when judging the level of conditioning in the 90’s we are not just looking at Dorian Yates and Andreas Munzer at their best, but at the general conditioning of the entire pro field. In the same way, when judging current pros we need to include more than just Dexter Jackson, Kai Greene, or Phil Health at their peak (Note: Ronnie Coleman will be left out of the discussion, as his Olympia wins spanned both generations, with the majority of them taking place post-2000).

Ok, now that we’ve got that out of the way, what is the best way to make this comparison? A fairly simple and reliable way to do this is to just compare the entire Top 10 line-up from—say the 1995 and 2015 Olympias—in all the mandatory poses. This will give us a pretty good idea of the overall level of conditioning within each group, as well as each generation’s strengths and weaknesses…and it won’t take long to realize that neither generation had the market cornered from a conditioning standpoint. Now let’s address some specifics.

When reading the following, stay with me for a second before jumping to conclusions. As I see it, bodyfat percentages and subcutaneous water is lower today than ever before, in general. Keep in mind that I am not necessarily referring to qualities such as hardness, density, separation, overall detail, etc. While there were a few guys from the 90’s who possessed incredibly low bodyfat and sub-q water levels, these men represented only a small portion of the total field and certainly did not represent the average competitor from that area. Although one could argue that from the front, the overall level of leanness and dryness in the 1995 line-up was just as good as the 2015 line-up (I don’t agree), the gap quickly begins to widen once they turn around to the back. While it was commonplace for many guys in the mid-90’s to display comparatively watery hams and glutes (and sometimes even backs) in the Top 10, nearly everyone in today’s Top 10 is much more peeled in these areas. While there are a few tricks in use today that can help selectively remove bodyfat from these areas to a slightly greater degree, being truly shredded in the hams and glutes only comes from being truly ripped, which means extremely low bodyfat and sub-q water levels.

Ask yourself how many guys from the previous era’s Top 10 possessed a rear-lower body like Flex Lewis (the answer is no one), Phil Heath, Kai Greene, or even Dexter Jackson? Again, the answer is pretty much no one. Back in 1997 a guy like Nasser El Sonbaty was able to place 2nd in the biggest show on Earth, despite his entire backside (hams, glutes, and back) being about as soft as a new-born baby’s ass. This is something that would never happen in today’s Olympia because no one would show up with a backside that far out of shape. There really is no denying that today’s pros, on average, display lower levels of both bodyfat and sub-q water, especially in the rear-lower body.

In contrast to the above, many of today’s pros also demonstrate a type of muscle softness and lack of density that just wasn’t seen as much in the 90’s. Back then, if a guy had a very low level of bodyfat, he was usually as hard and dense as nails. He may not have been as ripped in the ham and glute department, but his overall level of hardness and density was often superior to the guys today, despite possessing a similarly low level of bodyfat. Of course, these are just generalizations. There are plenty of guys from both generations who were hard, dense, and ripped, but this doesn’t take away from the fact that something is going on in the sport today which is causing an increasingly larger number of competitors to display this type of uncharacteristic softness, even when they are quite lean.

There are a number of reasons for this and each one of them can contribute to various degrees. Insulin use is one of these. When this drug is used to the point of insulin resistance it tends to be accompanied by a softish’ look, while also washing out fine details and decreasing muscle separation. However, even when insulin resistance is avoided and the drug is only used right before a show in order to maximize muscle fullness via glycogen supercompensation, it still often results in water retention. In some cases even a single injection can do so. With so many of today’s bodybuilders trying to hit the stage as big as possible, maximizing muscle fullness is critical. Unfortunately, when using insulin to accomplish this purpose, although effective, it almost always results in some degree of water retention and a subsequent loss of muscular detail.

Running large dosages of growth hormone into a contest is another potential cause, as GH increases whole-body water retention, including the subcutaneous region. Although not all brands of GH are equal in this regard (many believe this variance is attributable to differences in production technique), it has the potential to become quite problematic. However, a large portion of today’s bodybuilders are willing to put up with this side effect in exchange for the increase in muscle fullness that GH provides. We also need to consider the fact that black-market GH was not available back in the 90’s, so running large dosages of pharmaceutical-grade GH was cost-prohibitive for the vast majority of bodybuilders—including most pros. Today, it is nothing for even low-level competitors to run 10+ IU of GH on a regular basis.

Site enhancement oils (SEO’s) are another reason we are seeing more and more bodybuilders step onstage with a softer look and reduced muscular detail. While the proper application of low to moderate amounts of SEO’s is unlikely to cause any issues, many bodybuilders take things too far, while also employing shoddy application technique. This can cause significant problems. Things can get even worse when applying SEO’s at the last minute, particularly when the individual has little to no experience in this area. This is because SEO use is associated with inflammation at the application site. This can cause the entire area to swell up and begin holding sub-q water. As a result, the muscle takes on a softer, watery appearance with reduced detail…until the inflammation subsides.

These are just some of the things that today’s bodybuilders are engaging in that are responsible for the above-mentioned muscle softness, as well as a loss of density and detail. Of course, water and sodium manipulation, extreme or risky carb-loading methods, diuretics, and multiple other factors are also potential contributors. All of these things can make the bodybuilder look less conditioned (from a bodyfat standpoint) than he actually is, especially when several of them at present at once. Back in the 90’s things were simpler, so there was less room for error. These days most bodybuilders hire coaches to help walk them through what has been an exceedingly complex process. Still, this does not guarantee success.

As you can see, when trying to answer the question “were bodybuilders more conditioned in the 90’s?” the answer isn’t as simple as it may first appear. In my opinion, both generations could stand to learn something from each other, but until that happens we will likely see these same problems continue to manifest on bodybuilding stages.