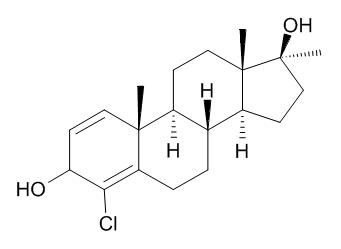 Oral Turinabol (4-Chlorodehydromethyltestosterone) is the drug made famous by the East German state-sponsored doping program. Of course, it’s not the only drug they used, but it holds the distinction of having been used more than any other. It’s the one people think about when they remember all of the Gold Medals won by East Germany throughout the ’60s and ’80s. And unlike Winstrol (stanozolol), which owes much of its popularity to a single athlete (Ben Johnson), Oral Turinabol rose to fame as the drug that fueled an entire country worth of Olympic athletes.

However, just because people use a drug en masse, doesn’t mean that a wealth of data exists concerning its practical application in athletes. Again, using Winstrol as an
example, it’s wildly popular, but scientific data in athletes is lacking. The difference between Oral Turinabol and Winstrol, or virtually any other performance enhancing drug in the world, is that it was studied through a state-funded collaborative effort that included scientists, coaches, athletes, and doctors. Even allowing for private enterprises that attempted similar programs (BALCO, etc…), and including the time-period when the United States was actively engaged in state-sponsored doping (the 50’s), the sheer scope of the East Germans’ program dwarfs anything that’s been attempted before or since.

In fact, although testosterone (either as a suspension or ester) is the most popular anabolic steroid in the world, there is significantly more data on Oral Turinabol use in athletes. This is a result of its meticulous application by the East Germans, over the decades where they kept records for thousands of athletes, their training, diet, and of course, their steroid programs. Because this was a state-run program, and dealt with national caliber and world class athletes, resources weren’t a problem; routines could be planned out over a four year (Olympic) cycle, regular blood work could be kept, and most importantly, accurate data was recorded for use in other athletes. Therefore, when a particular drug was shown to be successful, they started administering it to more athletes. In this manner, they developed a massive database of drugs and their effects, alone and in different combinations, in male and female athletes, and even across different sports with varying physical requirements.

Much of this information began to leak with the fall of the Berlin Wall in 1989; first as rumors, then later through the media, and finally through the declassifying of documents. Unfortunately, some of the documents in question were destroyed in an attempt to cover up the program…still others were “lost” before they could be made public.

Still, tens of thousands of pages survived and were made available to the public, and in them, one could see exactly what kinds of results were possible with Oral Turinabol. Throughout a four year Olympic training cycle, it wouldn’t be uncommon for male shot-putters to add 2.5-4m to their personal best distance, discus throwers to add 10-12m, and hammer throwers to add 6-10m. Female athletes often made even more impressive gains…generally speaking, women often display a greater response to anabolic steroids, and this holds true for both the desired effects as well as side-effects.

For example, the East Germans record that one of their female shot putters began using Oral Turinabol at a dose averaging between 5-15mgs/day (peaking at 35mgs/day prior to Olympic competition). She added over two meters to her best throw (better than 10%) in a four year Olympic training cycle.

Records kept by the coaches and scientists who worked with her also indicated that throws during her “off” period were also improved above baseline (pre-Oral Turinabol), leading to speculation that muscle and strength gained with this drug are permanent or nearly so. But the most important detail is that she wasn’t just an elite athlete or a world class athlete…in this case, she was already the world record holder in her event.

With the razor thin margins of international competition, these kinds of gains could take athletes who would have previously struggled on the international stage and have them winning gold
medals within four years. And when administered to a world record holder, it placed her well beyond reach of the rest of the pack.

Such results would be remarkable in athletes of lower caliber, but consider the fact that these were already elite competitors, and you can begin to understand why the East Germans were so fond of this particular drug. To put this into context, imagine a 100m sprinter shaving half a second off his best time – that’s the kind of effect Oral Turinabol was having on East
German athletes.

Those kinds of results were commonplace in the cache of records made available after the fall of the Berlin Wall. Lost and destroyed documents aside, the depth and breadth of the still-available information on Oral Turinabol gives it a pedigree untouched in the world of performance enhancing drugs.

Here’s what I mean

In the ’40s and ’50s, the Russians were absolutely dominating the sport of weightlifting. They weren’t just winning medals, they were winning Golds, and they weren’t just winning them, they were crushing the silver medalists by a wide margin. Then, in October of 1954, Dr. John Ziegler, was named as one of the team physicians for United States Weightlifting. As the (apocryphal) story goes, the team was competing in Vienna, and Ziegler had a few drinks with his Soviet counterpart. The Russian team doctor revealed that their secret to success was injectable testosterone (ironically, still the secret to success for most weightlifters).

After he got back ‘Stateside, and working alongside Ciba Pharmaceuticals, Ziegler tweaked testosterone by adding an additional 1-2c bond. This has the effect of reducing aromatization (estrogen conversion). He also added a 17 alpha methyl group, which not only allows the steroid to be taken orally and survive being broken down by the liver, but also slows the rate of aromatization. The end result was dehydromethyltestosterone, sold by Ciba under the trade name Dianabol, and widely distributed by Ziegler to the United States Weightlifting Team (remember, this is before anabolic steroids were banned in sports). 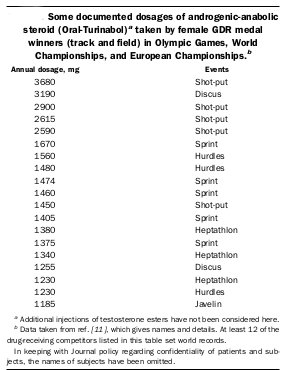 Dianabol has an anabolic rating of 90-210 with an androgenic rating of 40-60 (relative to methyltestosterone, which is 100:100). Effectively, on a milligram for milligram basis, the drug was an improvement on methyltestosterone, but carried with it the same drawback of stressing the liver. Unfortunately, while it theoretically should have caused less estrogen-related side-effects, Dianabol converts to a lesser amount of a far more potent estrogen (it actually converts to 17a methylestradiol).It’s thought that this conversion to the more potent estrogen is responsible for Dianabol’s effectiveness as a mass and strength builder (as estrogen itself is quite anabolic). Estrogenic side-effects are very common with the drug, including gynecomastia (development of female-like breast tissue in males), water-retention, and an overall “puffy” look to the physique. In the bodybuilding world, where it’s still incredibly popular, this drug is almost
exclusively used as a mass builder and cycles are kept short.

Despite its drawbacks, Dianabol was a major step forward in the world of anabolic steroids and athletics, and represented the cutting edge of PEDs in the ’50s and ’60s. But the East Germans
made it nearly perfect with their 4-chloro substitution. The anabolic potency of Oral Turinabol is greater than testosterone (scored greater than 100), and although its androgenic potency is somewhat in dispute, it’s certainly incapable of producing many of the negative side effects of Dianabol.

But when we look at the East German athletes who used it, we find that while the men didn’t suffer from traditional estrogenic side effects, it’s been noted that a decent number of athletes suffered from liver problems and the women experienced (sometimes extreme) virilization (development of male sexual characteristics). Neither of these two facts are surprising, as methylated drugs are notorious for taxing the liver, and neither the 4-chloro nor 1-2c double bond will do much to prevent 5 alpha reduction to a more potent (dihydro) metabolite in the body. The virilization may also be a result of the drug’s ability to bind to sex hormone binding globulin, thereby prevent testosterone from binding, and therefore allowing more of the latter to circulate unbound and physiologically active.

Potential side effects weren’t the top concern of the East Germans. Instead, potency and clearance time were of utmost importance when selecting drugs for their professional and Olympic athletes. By 1983, Oral Turinabol was being studied by anti-doping scientists, but they found that the drug is almost completely metabolized, with none of the original compound being excreted in the urine. They were, however, able to find three major and three minor metabolites. Still, only 15% recovery of the dominant metabolites was possible and even this was only possible within an extremely short detection window.

By 2012, about 50 metabolites could be detected in the urine of Oral Turinabol users, six of which were new long-term metabolites, and all of which significantly increased the detection time for the compound.

Originally, Oral Turinabol was manufactured by Jenapharm (a German pharmaceutical company), but they haven’t produced it in decades. It was available on the black market again by the mid-90s, and was re-introduced en masse by British Dragon in the 2000s; now, availability and use have only increased since then, and it’s become a staple on the underground market.