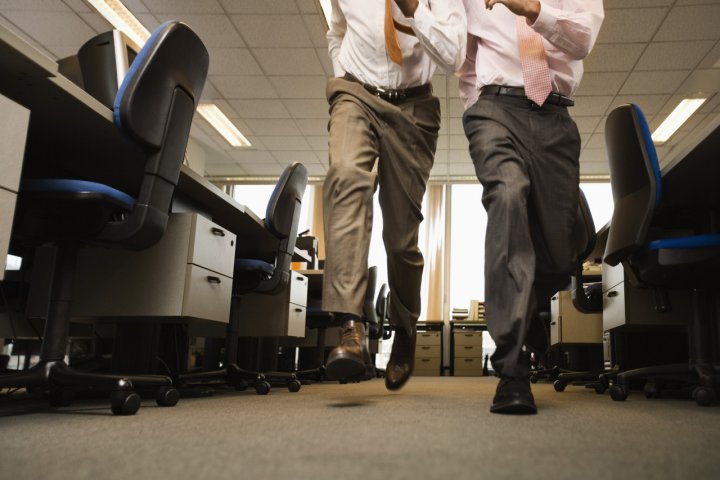 How many of us have desk jobs? Probably a good percentage, right? How many of you feel as though getting up during the day to take a walk would get you called into the boss’s office? Many people feel that way and it’s a problem in today’s workforce. Most people are not taking the time to get up and move throughout the day and it’s causing many American’s the need to go out and buy bigger pants.

A new study could possibly help employers promote health with one simple change—engaging in one “walking meeting” per week. What? I know, I read your mind…..and it’s exactly what you are envisioning. A new study conducted by the University of Miami, Miller School of Medicine has shown that there are several health benefits from having a meeting where all participants are walking together versus sitting in a meeting or conference room.

The American Heart Association recommends that everyone should get at least 150 minutes of physical activity each week (that breaks down to 5 days of physical activity for 30 minutes each day during the week). When you think about it, giving up 30 minutes of your day really isn’t that much. In a 24-hour period we’re talking about roughly 2% of your time. Still can’t seem to find 30 minutes to get active? I bet if you turned off the television at night you’d be able to find the time pretty easily.

A professor at the University said, “Physical activity interventions such as the walking meeting protocol that encourages walking and raises levels of physical activity in the workplace are needed to counter the negative health effects of sedentary behavior.”

White-collar workers from the University of Miami were used as the participants for this study. Each participant wore an accelerometer every work day (Monday through Friday) for three weeks to measure their overall physical activity levels while at work. During this timeframe each participant was engaged in “walking meetings”. What the researchers found was that as the weeks went by, the participant’s activity level increased.

SDMZ5-728×90
During the first week the average physical activity level of the participants was 107 minutes for the entire week at work. The second week that number went up to 114 minutes and finally on week three it increased again, this time to 117 minutes. Not only can you be productive during meetings, but you can also stay active and improve your overall health.

By getting up and moving throughout the day, you can feel more energized, improve concentration and productivity, burn more calories, and help lower the risk of health problems. Studies have also found that sitting more than six hours a day can have some serious negative health effects—especially as that sedentary lifestyle continues for years.

If an employer has healthier employees, that not only reduces healthcare costs, but it also increases productivity. The lead researcher for this study said, “Walking is known to have tremendous health benefits. Having sedentary, white-collar workers consider walking meetings feasibly suggests that this intervention has the potential to positively influence the health of many individuals.”

Source: The University of Miami, Miller School of Medicine