The official announcement of Kevin Levrone’s comeback is currently far and away the biggest story in bodybuilding. In fact, this shocking announcement is one of the biggest stories in the entire history of the sport, largely due to the fact that Kevin is a legendary bodybuilder with a massive fan base, who has been retired for well over a decade. Kevin has placed second at the Mr. Olympia on four separate occasions, and many people feel that he was the rightful winner of at least one of those Olympia contests. However, Kevin has not stepped onstage since 2003, thirteen years ago, and he will be at least fifty-two years old by the time the 2016 Mr. Olympia rolls around. Ironically, one of Kevin’s top competitors at the 2016 Mr. Olympia will be forty-seven year old Dexter Jackson, who is one of the oldest men in bodybuilding history to place runner up at the Mr. Olympia.

Dexter and Kevin competed against each other at the Mr. Olympia five years in a row, from 1999 to 2003. Kevin handily defeated Dexter for the first three years, until 2002 when Dexter placed 4th and Kevin placed 2nd, in a show in which Kevin was certainly superior, although they were comparable. In 2003, Dexter finally defeated Kevin, at what would be Kevin’s final Mr. Olympia until this year. Kevin has gone on record saying that his heart was not in the game for that 2003 Olympia, where his legs were down and he placed a disappointing 6th place. Based on how Kevin looked in the years leading up to this show, I tend to believe him when he says he did not give the 2003 Olympia a full blown effort, pun intended. Luckily for Kevin, along with every bodybuilding fan ever for that matter, Kevin will have an opportunity to give 100% effort this year and get revenge over Dexter. We all know what Dexter will bring to 2016 Olympia for the most part, but we can only guess what a fifty-two year old Kevin Levrone will look like, via the use of recent photos and the words that are coming out of Kevin’s mouth. For my money, Kevin is planning to come in on the smaller side, more streamlined and supremely conditioned, so that is the templet I will be using to compare him to The Blade. How will this new/old version of Kevin do against a forty-seven year old Dexter?

I have Dexter winning the quarter turns, mostly because of his vast experience and unparalleled polish. After thirteen years away from the stage, it is essentially inevitable that Kevin shows some rust in his posing and presentation, more so early on in prejudging than at any other time in the show. However, if I were comparing Dexter to Kevin in his prime, Dexter would not stand a chance in the quarter turns. 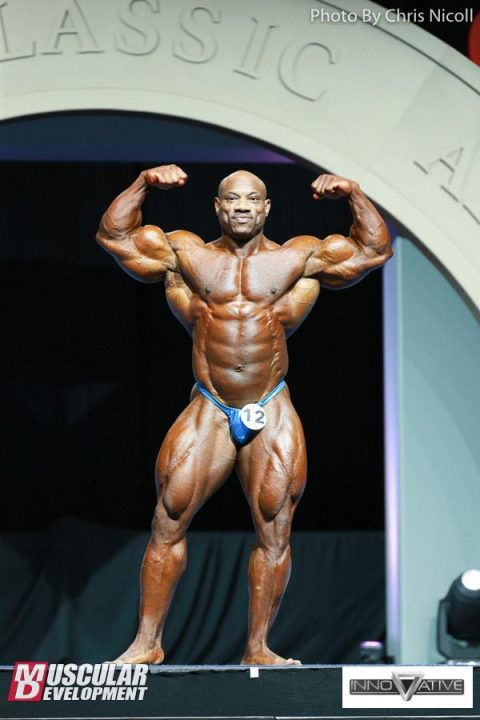 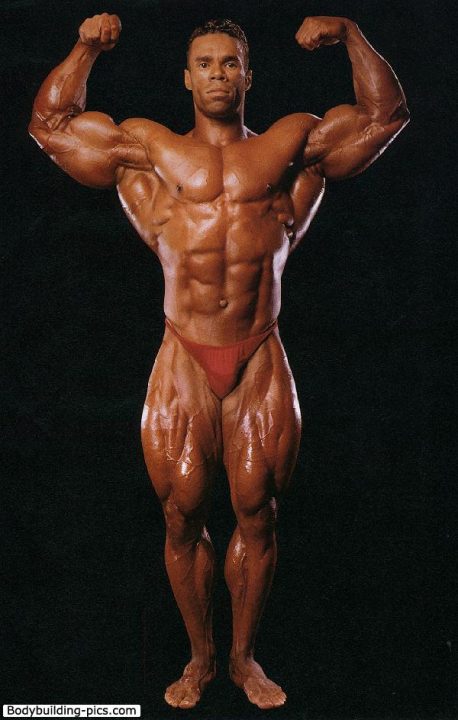 Half a decade ago, Dexter’s front double bi was nearly unbeatable. Unfortunately, this shot is not what it used to be for Dexter. His waist has grown quite a bit over the last few years, while his legs have lost a bit a separation, making his front double far less effective. This shot will probably be a money shot for a streamlined Kevin Levrone. His midsection will be tighter than Dexter’s, most notably down by the hip, where Dexter’s waist has thickened up. I’m sure Kevin’s legs will be underwhelming, but as mentioned above, Dexter’s legs are not exactly anything to write home about. Kevin Levrone wins the front double. 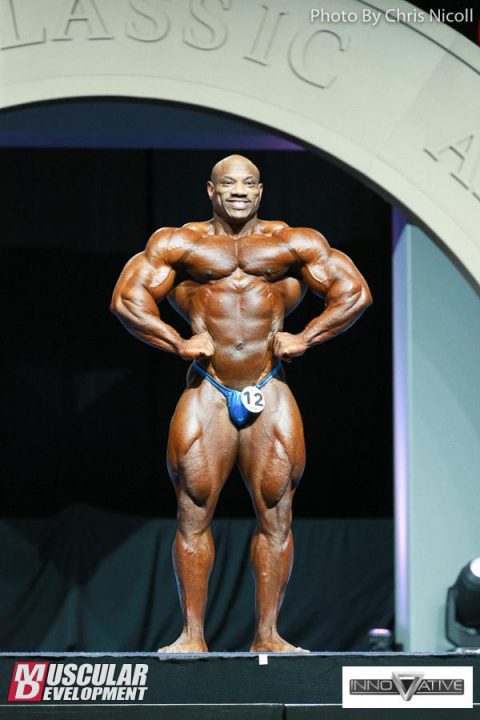 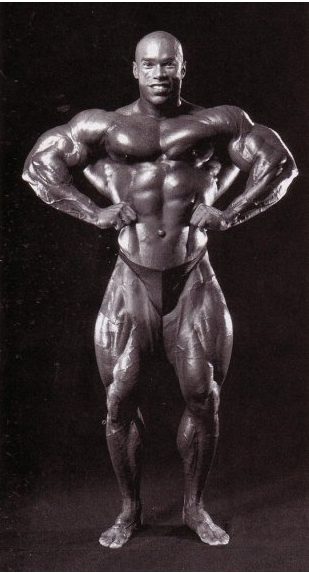 This is a fairly strong shot for both of these guys. Even a down sized Kevin will be wider than Dexter, while The Blade will display more roundness and fullness. Once again, if they were both in their prime, Kevin wins this shot for sure. Without knowing exactly what Kevin will bring to the stage, this one is an extremely tough call. Just because Kevin has been out for so long, Dexter wins the front lat spread. 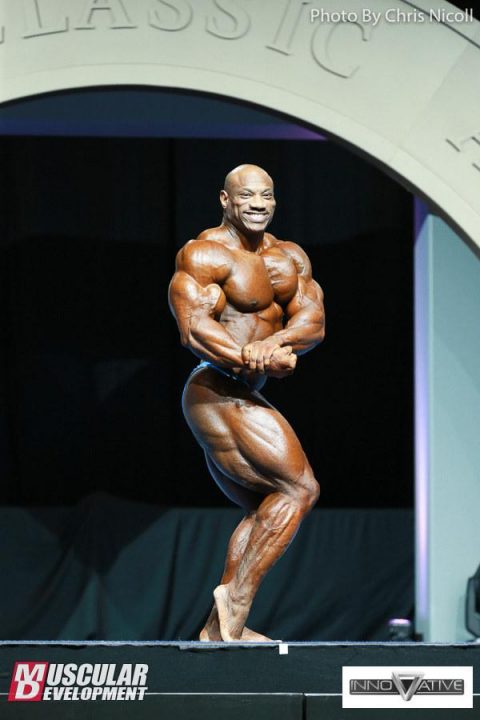 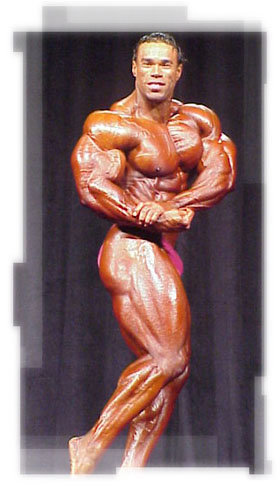 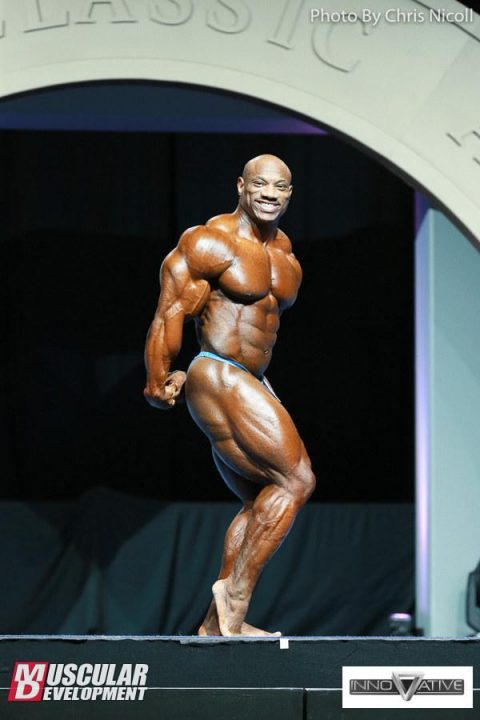 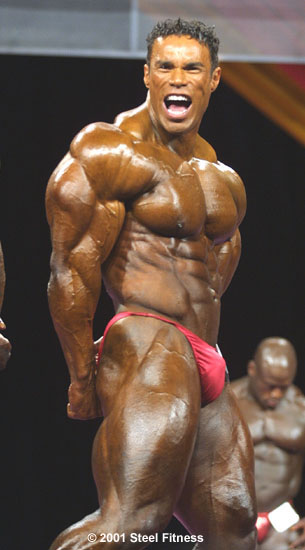 Dexter’s newly found waist thickness will probably cost him this shot when standing next to The Maryland Muscle Machine. Kevin sports some of the greatest triceps in bodybuilding history and his waist will more than likely be super tight in this shot. Dexter’s only hope on this pose are his legs from the side, which look like the legs of a world class race horse after a Trenbolone bender. Dexter will certainly win this pose from the waist down, but Kevin will find a way to win the shot with his upper body, namely his delts and triceps. Kevin wins the side triceps. 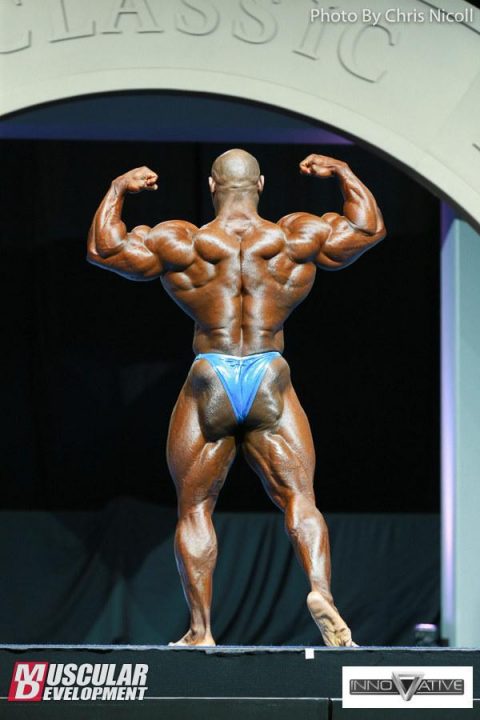 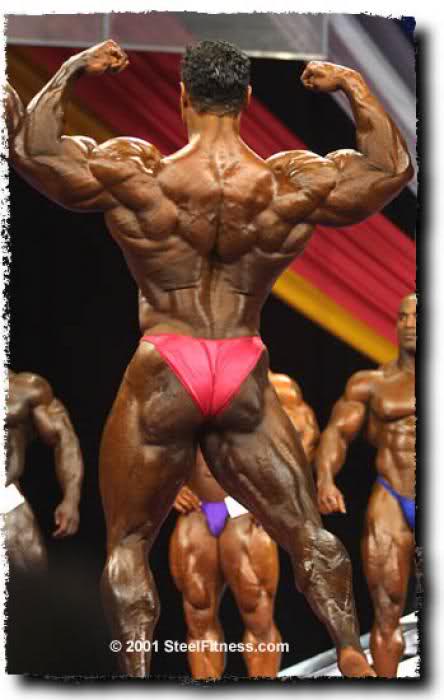 I can’t help but think that a smaller Kevin Levrone will struggle in this shot against the other top Olympians, Phil Heath in particular. Dexter Jackson is no slouch in this pose either. Kevin’s lack of thickness and slight legs will prove to be his demise in this shot against the five time Arnold Classic champion. Kevin has better calves than Dexter for sure, but we all know how that goes. The back double goes to Dexter. 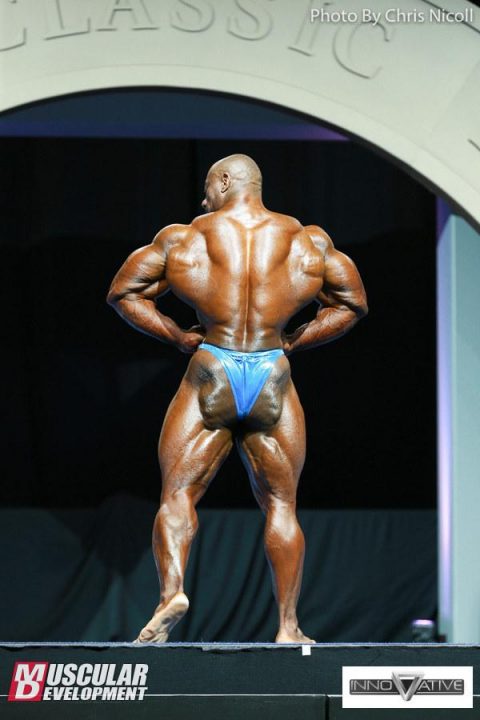 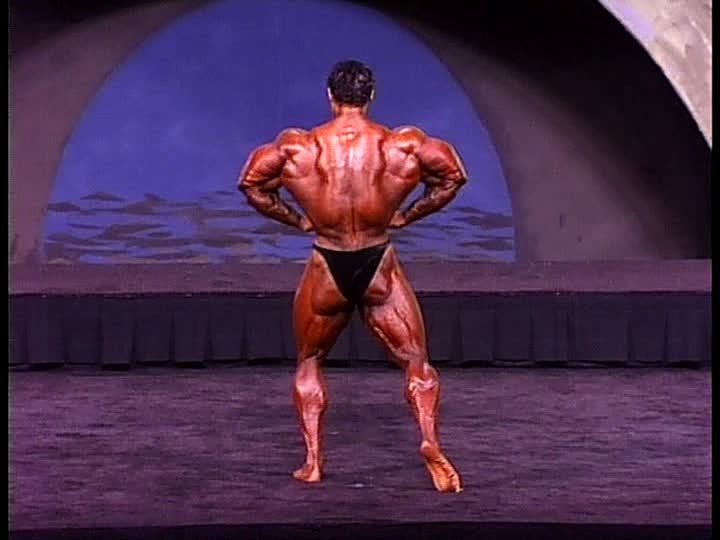 As mentioned above, Kevin will have a width advantage over Dexter at this show. Unfortunately for The Blade, width means a lot in the back lat spread. These guys both have mediocre legs from behind, so this shot will be pretty close to a tie below the belt, although Kevin does possess much better calves. From the waist up however, Kevin will more than likely be superior, mostly due to Kevin’s aforementioned width advantage. Kevin defeats Dexter in the back lat spread. 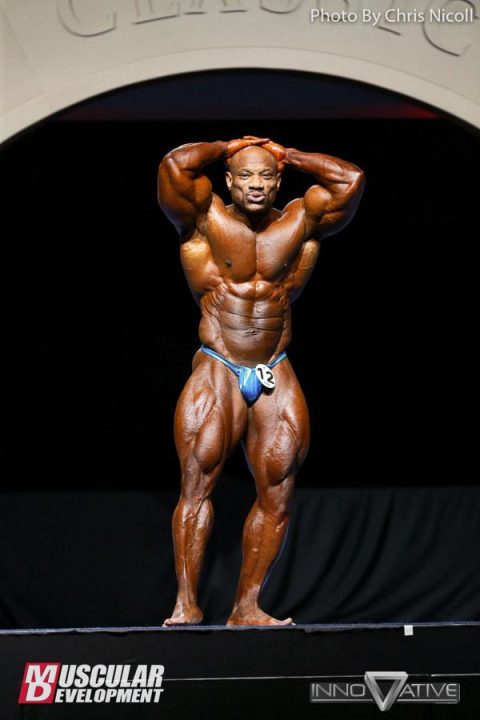 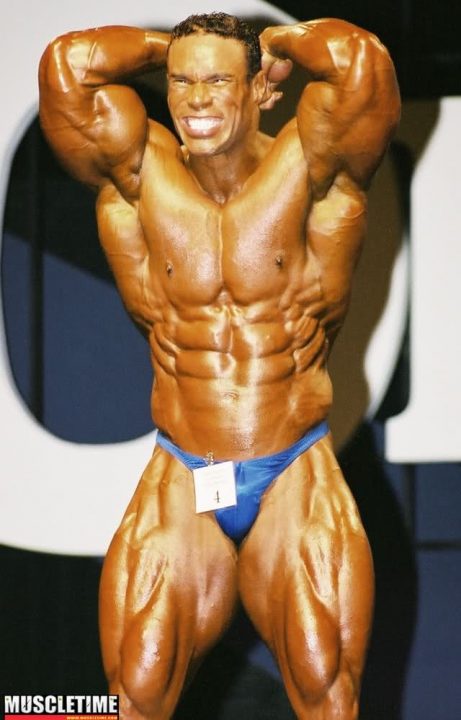 Much like the front lat spread, this pose will prove to be very close. Just as is the case with Dexter;s front double bicep, his abs and thigh pose has continued to dwindle over the last half decade, as his waist becomes thicker and his quads slowly lose separation. Very few bodybuilders in history can or could stand next to The Blade in his abs and thigh shot from 2000 to 2009, but I am strictly discussing how these guys will look this year in 2016. Kevin was not exactly overpowering in this shot, as he tended to look a bit slight. For these reasons, neither Dexter nor Kevin will be scaring anyone off the stage with their ab/thigh pose. I call this one a draw. 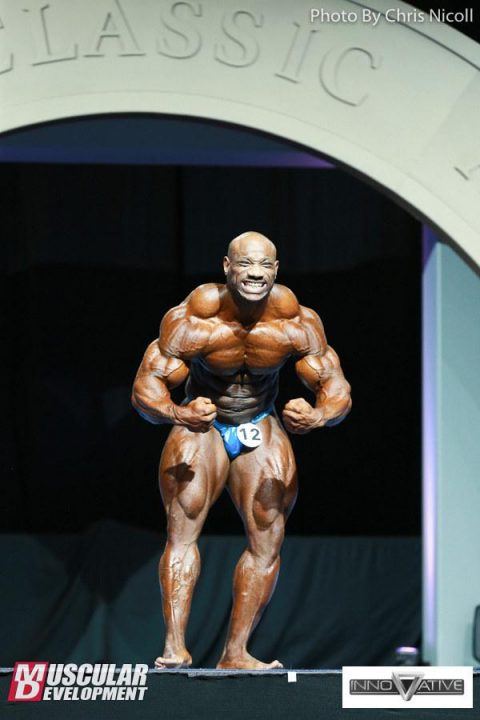 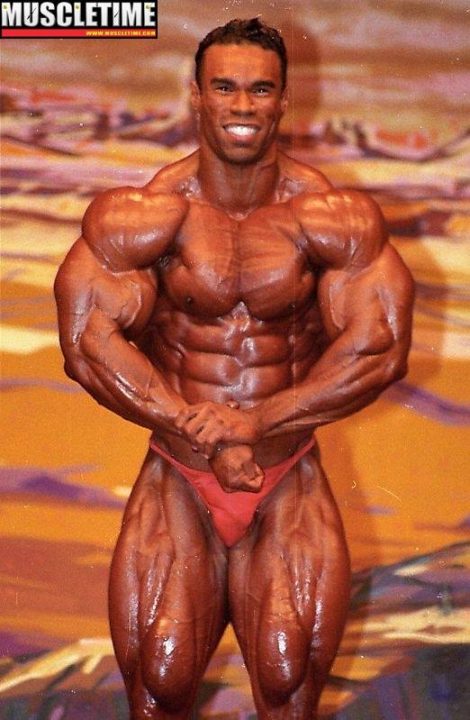 This will be a sight to behold. Two of the most iconic most muscular shots in bodybuilding history. Kevin will surely favor the angled crab most muscular, which he made famous, while Dexter attempts to seal the deal with his classic crab, which puts more striations on display than any other single shot in the lineup. These guys both have incredible hands clasp most muscular poses as well. Regardless of the fact that Dexter is both skinless and nearly flawless in this pose, I just can’t bet against the legendary Kevin Levrone most muscular. Kevin wins this shot to the sound of the audience erupting with cheers.

According to this hypothetical pose down, which is largely based on speculation, Dexter wins four out of the eight mandatories against the 2016 version of Kevin Levrone and gives up only three, with one being a tie. Dexter also comes out on top in the quarter turns. It goes without saying that the idea of a fifty-two year old Kevin Levrone going shot for shot with one of the top three bodybuilders in the world, is hugely optimistic. My optimism ends at giving Kevin three shots over Dexter, anything more, for all intents and purposes, would be a bit much considering the circumstances. However, I do feel that if Kevin can get back most of his size and show up with stellar conditioning, he will in fact go toe to toe with The Blade one last time.