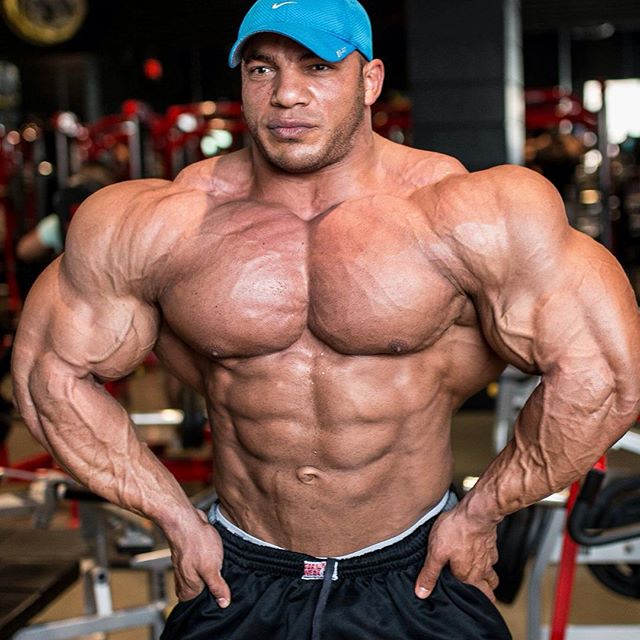 Bodybuilding rivalries have been a mainstay in our sport since its very beginning. Rivalries are almost a necessity in our sport, as they keep things interesting in an industry that tends to have its fair share of dry spells in regards to excitement. Two men who may be forming a new rivalry in today’s landscape, are Justin Compton and Big Ramy. These guys are both fighting for a spot amongst the overflowing number of top five Olympia contenders in 2016, a list that includes Kai Greene, Shawn Rhoden, Dexter Jackson, Dennis Wolf, Cedric McMillan and even Josh Lenartowicz.

Often times, similarities make for a great rivalry. In the case of Justin and Ramy, they are both young guys, roughly the same height (Ramy- 5’10”, Justin- 5’9”), and absolute genetic freaks, who were able to gain pro caliber muscle in just a few years. Justin and Ramy also share the similarity of having one key issue that keeps them from winning just about any show they enter. For Ramy it is condition. Ramy has never showed us the truly spectacular condition that he needs in order to put the rest of the IFBB in his rear view. Justin on the other hand, struggles with a midsection that has been slightly distended, as well as blurry and undefined in his last couple of outings. Justin is unquestionably a top five Olympia contender, assuming he gets this one issue under control. For the sake of this piece, I will assume that both of these guys will have these issues mostly corrected when they finally meet onstage.

That is not to say that these men have do not have differences. Compton is an all American golden boy type figure, while Ramy is a giant kid from Egypt who does not speak very good English. Although their size does not look massively different visually, the story of the scale would show otherwise. Nobody knows what these guys truly weigh, but from what can be gathered, Ramy competes at well over 300 pounds, and even with perfect condition he would more than likely be about 295 onstage. Compton, in stellar condition, void of a bloated midsection, would probably not weigh more than 265 onstage, if that. This is a fairly substantial difference, seeing as how even if Compton were Ramy’s height, he would still weigh no more than 275. These two bodybuilding phenoms have yet to step on stage together, but this epic battle is set to take place in September at the 2016 Mr. Olympia contest, where both of these young competitors will be hoping to thrust themselves into Mr. Olympia contention. How will these two fare against one another?

As with most shots of Big Ramy, in the the front double bi you immediately notice his extreme mass and fullness. The shot is close above the belt. Compton sports better arms, and in this pose, Compton’s waists appears smaller than Ramy’s. Ramy’s quads in the front double appear to be fake, with the most extreme sweeps that we have ever seen. Ramy is capable of hiding his possible lackluster condition in this pose. That said, leg separation goes to Compton. This shot leaves you thinking that with the right improvements Justin could dominate this shot, but at this point the shot still goes to Big Ramy. 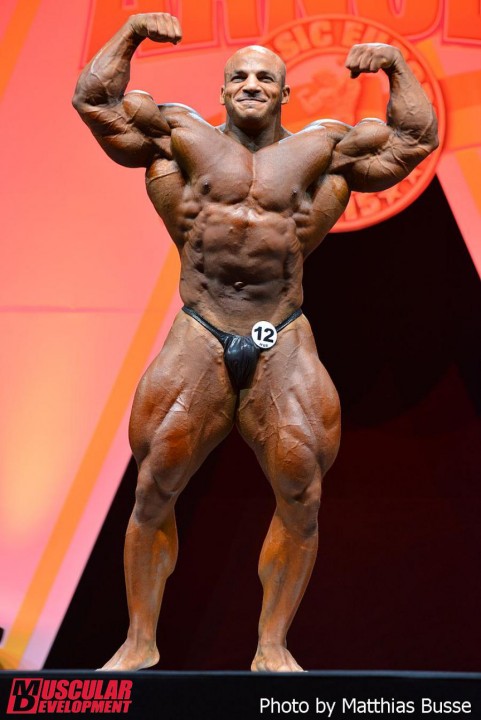 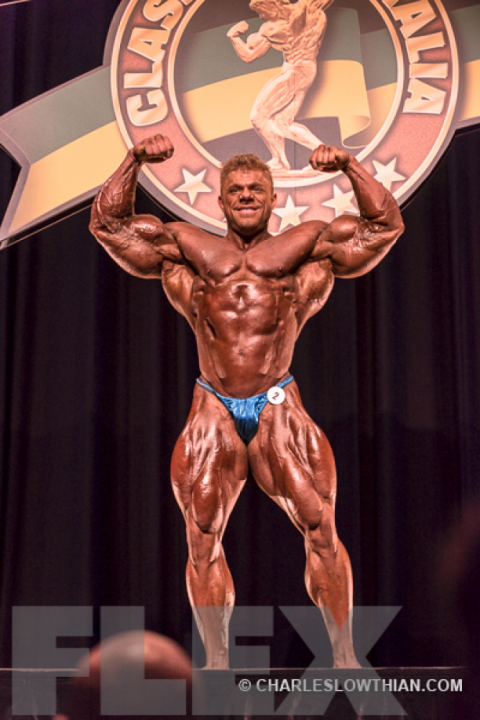 Although Compton looks good here, Ramy looks like a B-52 Bomber. Ramy’s delts not only pop out, but also up. Ramy continues to sport that gravity defying quad sweep, and his leg separation tends to come in a bit more in this shot for some reason, though still not quite on par with Compton’s. The front lat spread makes it clear that Ramy is in fact larger than Justin, as Ramy fills up an equal amount of stage space as several “normal” bodybuilders. Outside of leg separation, Ramy dominates this shot mostly due to the sheer amount of space he takes up onstage. 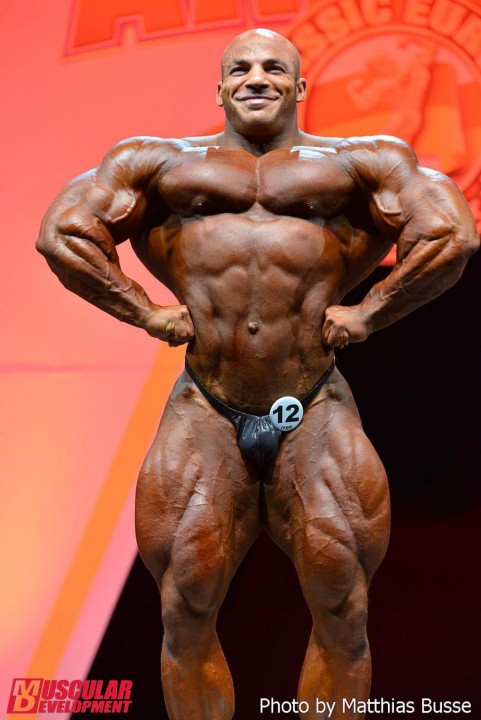 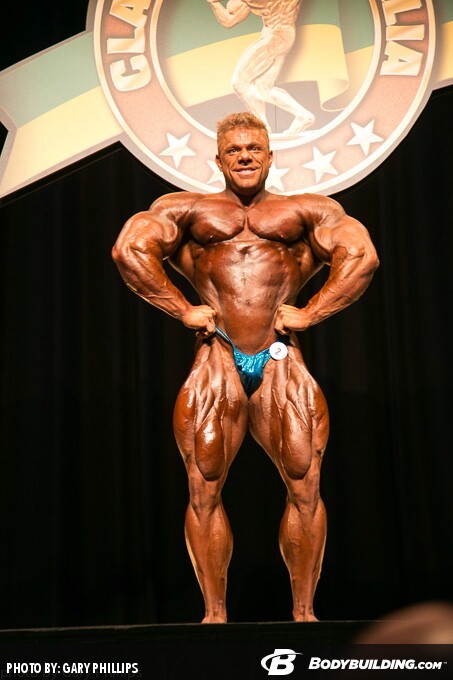 Compton’s legs are a bit slight from the side and they lose him this shot. This fault is really the only one that can be seen on Compton as far as his physique is concerned. In the side chest pose, Ramy displays about as much balance from head to toe as a competitor could ever hope for. While Compton has better condition and detail, he is not as complete or as large as Ramy in this shot, from the waist down most noticeably. Ramy wins the side chest. 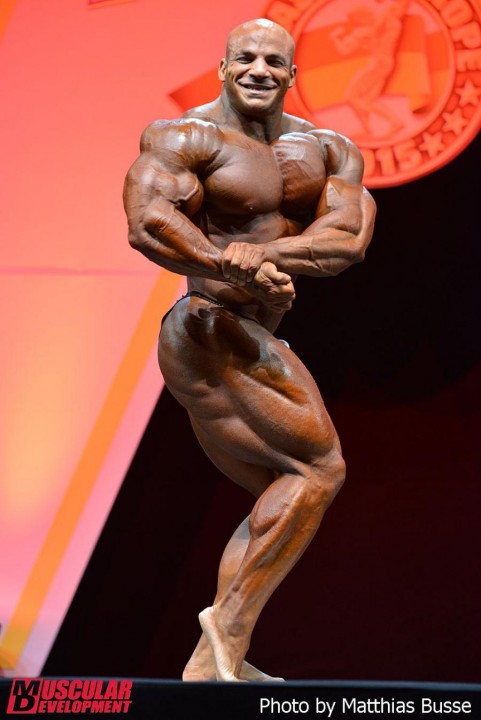 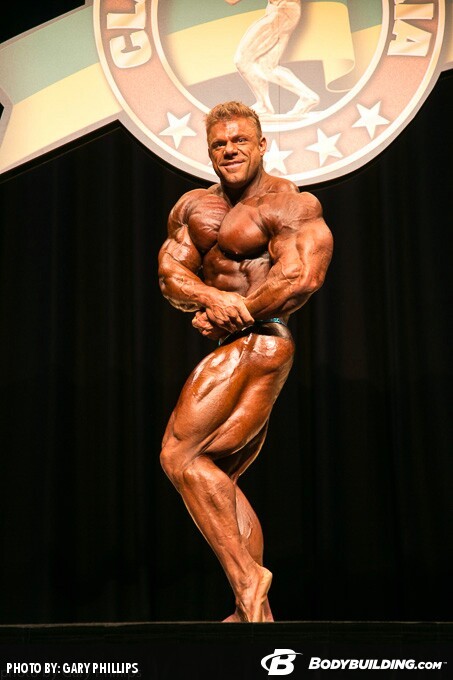 These are two of the best side triceps in the game right now. Ramy is huge and very complete, while Compton’s arm and delt look like a comic book sketch. The superiority of Compton’s detail is an advantage in this shot, making it difficult for Ramy to beat with him. Ramy’s legs from the side are considerably bigger, but also softer. Seeing as how this is the side triceps pose, the better triceps of the two are hanging off the back of Justin’s arms, not Ramy’s. With superior triceps development and conditioning, Compton narrowly takes the side triceps, but only if his waist is in. Otherwise, Ramy wins another pose. 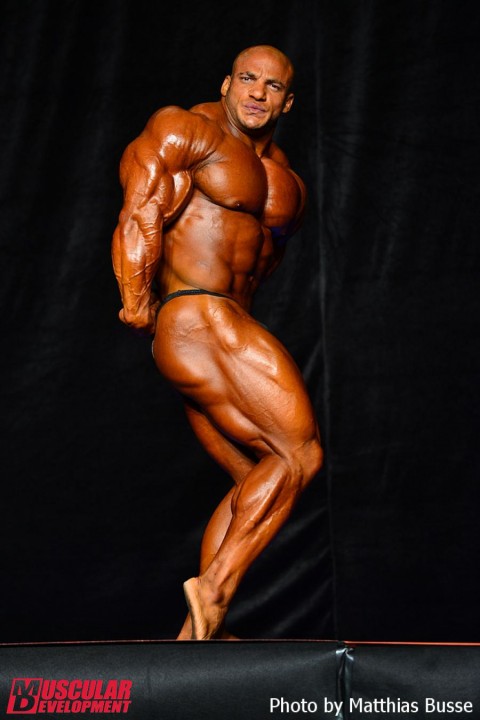 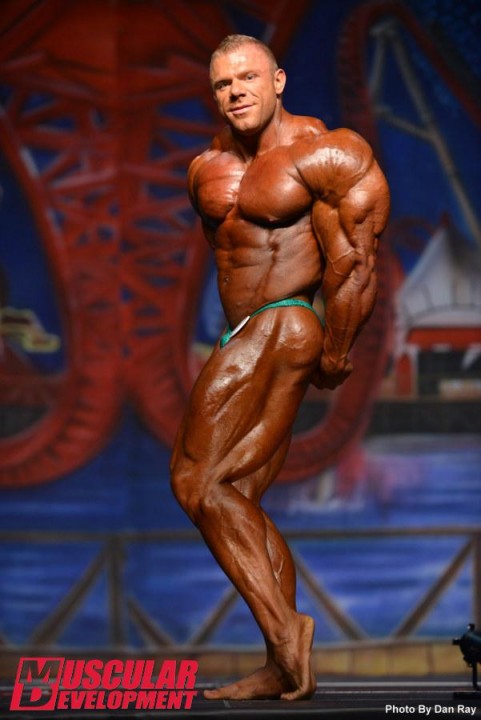 Ramy has far bigger legs from behind, that is obvious right off the bat. What is also obvious is Compton’s detail, which is making Ramy look like maybe he thought the show was a couple weeks later. Compton’s shape is phenomenal in this pose and becomes a strong asset. Surprisingly, Compton’s delts and upper back look equally as large as Ramy’s, if not larger. Ramy is still sporting superior thickness, while Compton’s shape shines through in this pose. Justin wins the back double bicep, mostly due to superior condition. 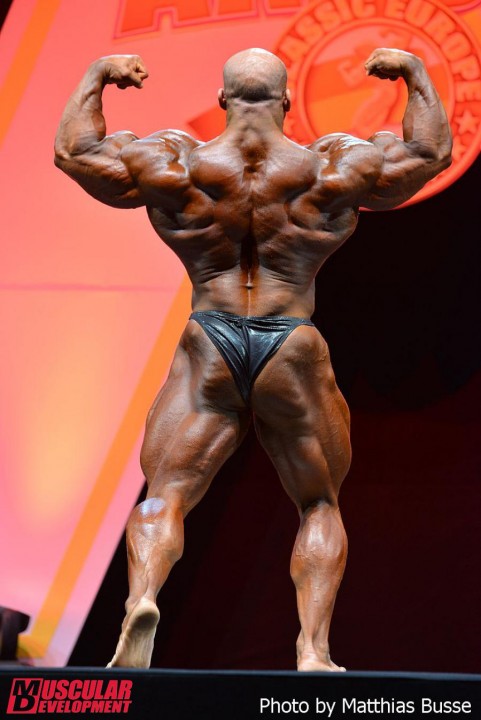 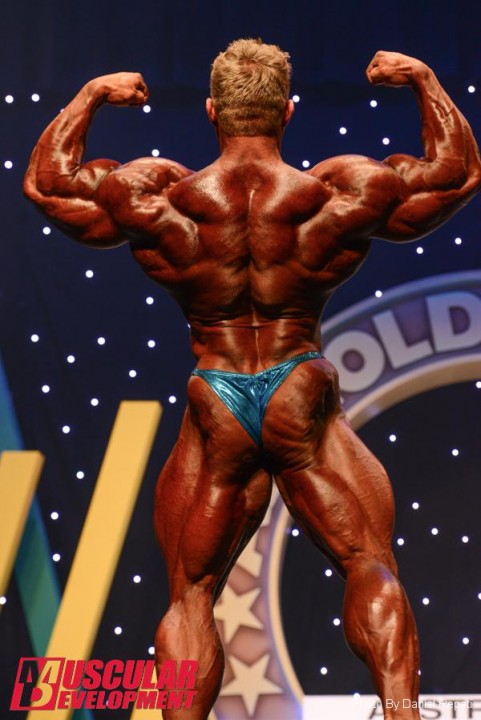 The B-52 Bomber swoops by for one more bombing run. The breakdown of this shot is very similar to the front lat spread. While Compton is more conditioned, Ramy blocks out all of the lights in the arena when he spreads his wings. Wings that attach at the waist, flare out seemingly past his shoulders, and reattach outside of the armpit. Compton needs to fill out just a little more in order to equal Ramy, as it appears that Compton would fit right inside of Ramy in this shot. Back lat spread goes to Big Ramy. 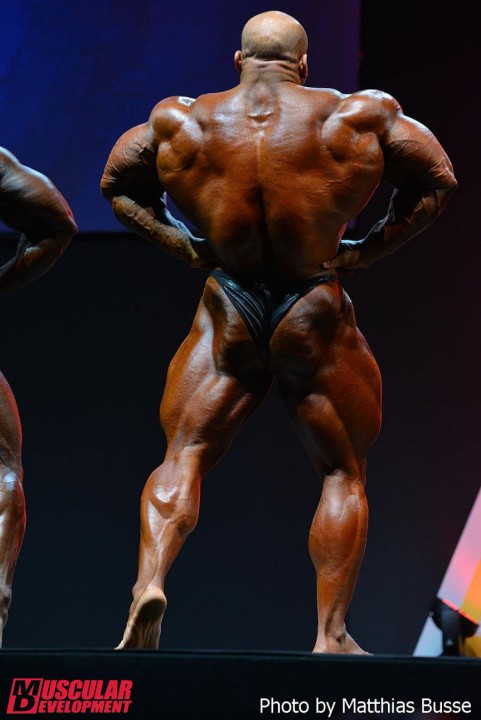 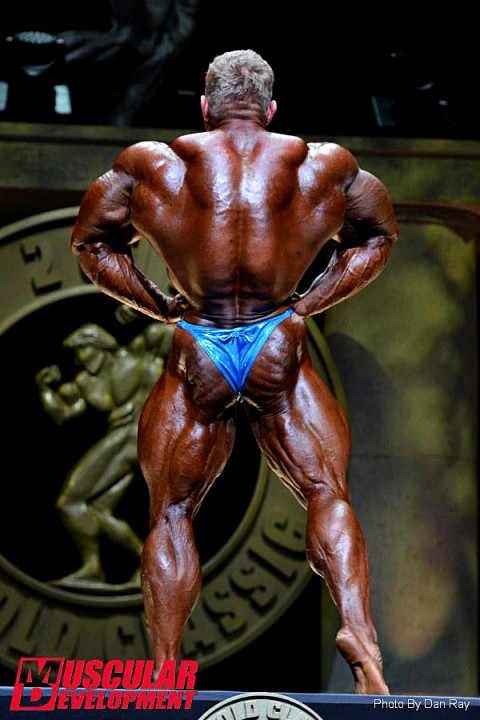 Just as with the side triceps, you would be hard pressed to find better ab and thigh shots than what are displayed by on-the-money Big Ramy and Justin Compton. Ramy might be the only 300 pound competitor ever with such an outstanding ab/thigh pose. The smallest waist you could ever imagine on such a large man, along with truly cartoonish quads. That said, Compton sports the greatest example of an “x-frame” humanly possible. Not to beat a dead horse, but Ramy has bigger, yet less separated quads. Condition counts for more in this pose than many others. and Compton has superior condition. Although Ramy has the shock factor on his side, Compton takes this shot with his dramatic v-taper and condition. 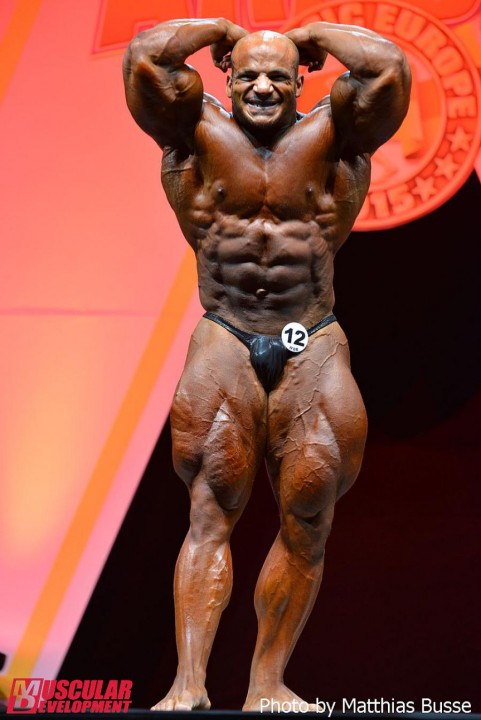 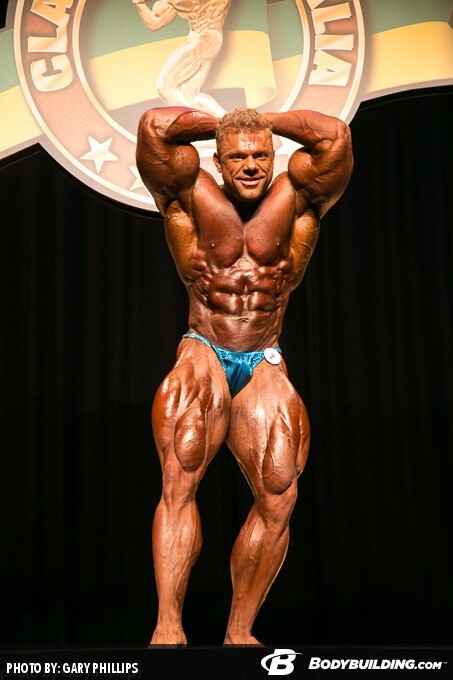 Both of these athletes own frightening hands clasped and or hand on hip most muscular shots. Aside from conditioning, Ramy blows this shot out of the water, which is saying a lot seeing as very few bodybuilders can stand next to Compton the the most muscular. Some fans might be of the opinion that Compton wins this shot based on his deep separation and detail. However, Ramy is just too freaky. He looks beyond cartoonish, as the imagine of his most muscular might sway a cartoonist to think that look is a bit unrealistic, even for a cartoon. Ramy wins this shot with his ultra freaky, cartoonishly shaped mass. 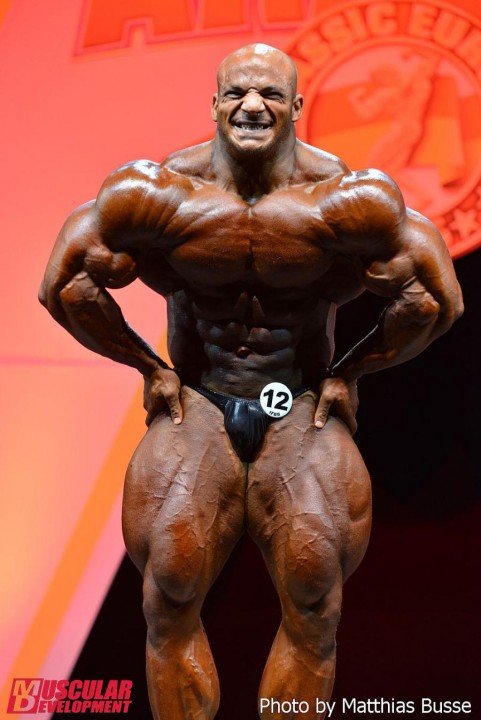 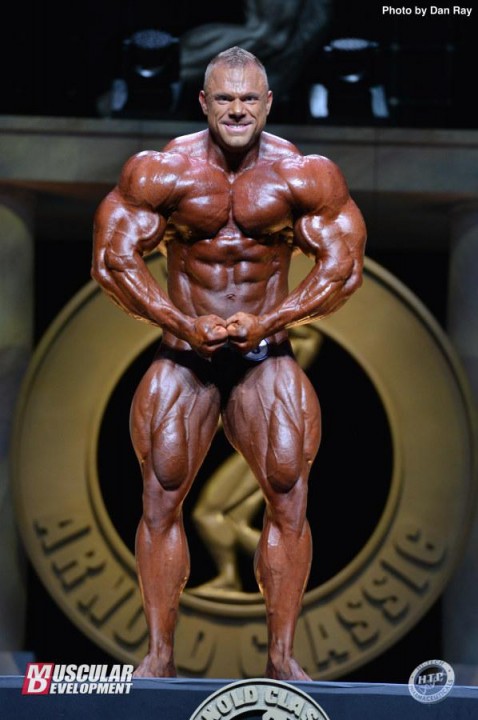 This breakdown puts Ramy ahead five to three in the eight mandatory poses. However, this does not automatically mean he beats Compton, not by any stretch. The quarter turns have to be taken into account, as well as how the athletes look in transition between poses. The other factor which must be taken into account, as mentioned earlier, is what kind of improvements or lack thereof, will these athletes make by the time the Olympia rolls around. For my money, Compton has more to overcome at this point than Ramy, and that leaves me to suspect that Ramy will defeat Compton even more handily than this breakdown would imply. This will be Compton’s first time at the Olympia and he will just freshly be 28 years old. One would be a fool to think that nerves will not come into play at Compton’s very first Olympia experience. Although, it is possible that the uncanny ability to improve that we saw earlier in Justin’s career will make a comeback of sorts and counteract these potentially physique diminishing nerves. No matter how you slice it, this will be a showdown for the ages and I have a strong inkling that one of these men will be catapulted into “Phil’s main threat” status at this years show.