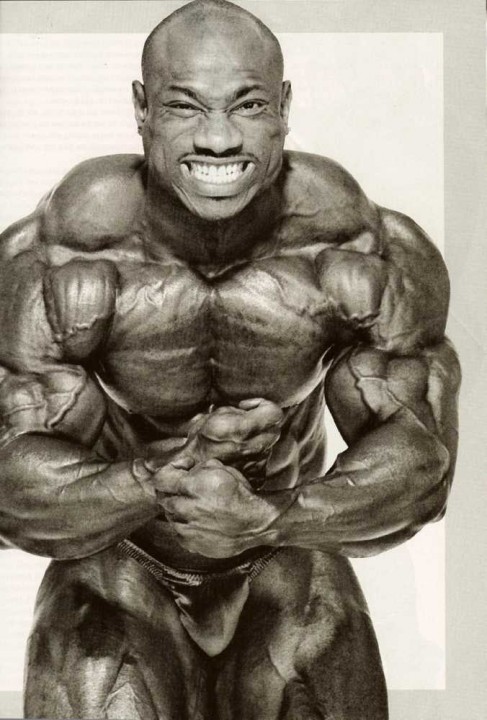 Hall of Fame inductee and bodybuilding legend, Shawn Ray, is best known for his outspoken ways, ability to make enemies in our industry, and his record number of twelve top five finishes at the Mr. Olympia contest. While Shawn also lays claim to two professional wins, including an Arnold Classic victory, as well as two runner up finishes at the Olympia, all of these these accomplishments, in the eyes of most, pale in comparison to his monumental run of twelve top five finishes at the big dance. This record has been in jeopardy at times in the past, and it is now once again on trial. Unfortunately for Shawn Ray, his main claim to fame is a record that is currently on very thin ice. This thin layer of ice is beginning to splinter under the weight of a 230 pound statue made of granite hard human flesh, appropriately referred to as, The Blade.

Shawn Ray’s record of most top five finishes at the Olympia in history, is no small feat. To put it into perspective, the list of elite athletes who have failed at accomplishing this task is staggering. Ronnie Coleman, who is considered by most to be the greatest bodybuilder to ever squeeze into a pair of posing trunks, only managed to finish top five at the Olympia ten times, falling two top five finishes short of Shawn’s record. 2001 saw the emergence of another bodybuilding God, Jay Cutler. Jay, despite being a four time Olympia champ, and one of the greatest bodybuilders of all time, also called it quits after ten top five finishes at the Olympia. Now, obviously Ronnie won the Olympia a record eight times, and although Jay also came up short of Shawn’s record, his ten finishes were actually all top two finishes, not just top five, putting him in a league of his own in that regard. Nonetheless, the topic at hand is top five finishes, not second place finishes.

Kevin Levrone, another Hall of Fame bodybuilder, is often considered the greatest bodybuilder in history to never get his hands on a Sandow trophy, and from a statistical standpoint, this opinion is indeed a fact. Kevin finished in the runner up spot at the Mr. Olympia a heart breaking four different times. However, in the race to the most top five finishes at the Olympia, even the Maryland Muscle Machine himself eventually hung up the trunks after eleven years of top five finishes, making Kevin a close second to Shawn. That said, Kevin loves to tempt us with talks of a comeback to the Olympia stage. Many bodybuilding fans and insiders agree that if Kevin did in fact make a serious comeback, it would be entirely possible for him to place top five at the Olympia. While this is fun and exciting to ponder, I personally feel these people are a bit delusional. Kevin is fifty years old and has a very successful, lucrative, supplement line, which means he is probably no longer “hungry”. In a sport as tough as bodybuilding, this internal “hunger” is of massive importance. Not only that, but fifth place more than likely means defeating at least one bodybuilder along the lines of Dennis Wolf or Big Ramy. Good luck with that at fifty years old, after not competing in well over ten years.

Dexter Jackson’s recent success at the Arnold Classic and Mr. Olympia, at the ripe old age of 45 years old, has officially launched him deep into legendary status. Dexter has joined the ranks of our sport’s age-defying elite. These ranks include names such as Robby Robinson, Albert Beckles, Darrem Charles, Toney Freeman and a few select others. Dexter has also put himself within serious striking distance of Shawn Ray’s oh-so-cherished top five finish record. In fact, had Dexter placed only one spot higher at the 2011 Mr. Olympia (he placed sixth at that show), he would currently be residing in twelve-top-five-finishes town with Shawn. However, as it stands, Dexter is tied with Kevin in the exclusive eleven-top-fives club.

One could make the argument that since Dexter actually won the title in 2008, a task that Shawn never fulfilled, Dexter’s twelve top six finishes, which includes the Olympia win, is actually a more impressive streak than Shawn’s record, which is void of a Sandow. One thing is for certain, such an argument sure as hell would not make Shawn very happy. Dexter has already stated that he is doing the 2016 Olympia, and he plans on taking down reigning champ Phil Heath, en route to winning his second Sandow trophy. While Dexter winning the 2016 Olympia is a pretty far fetched idea, it would be far more ridiculous to theorize that Dexter will not place top five in 2016. This seemingly automatic top five finish would put Dexter in an epic tie with Shawn in regards to the most top five finishes. Assuming Dexter does not retire at this show, which is entirely possible, it is not out of the question to think that he could finish top five for a thirteenth time in 2017, thus becoming the stand alone, all time time champ of top five finishes. Only time will tell.

How does Dexter manage to have such extensive longevity in a sport that generally causes extreme wear and tear on both the body and mind? The answer can be found hidden away in Dexter’s DNA, thanks to Mrs. and Mr. Blade senior. Dexter openly admits that he occasionally ate junk food while dieting for shows most of his career, while successfully avoiding cardio and ab training all together. Dexter, like most professional bodybuilders, does not openly discuss his drug use, although he has made mention of never needing a lot of “supplements”. I would bet good money that his doses were very low in comparison to his opponents for the majority of his career. The results of these genetic realities include, less physical and mental stress, more time for rest, less physical wear and tear, a healthier body, etc., all of which increase the potential for competitive longevity.

The vanquishing of Shawn’s record by The Blade, if it comes to pass, is not great news for Shawn. Shawn, for whatever reasons, has created a lot of enemies in our industry. In fact, statements such as “Shawn was a great bodybuilder, he’s just not a great person” are heard quite frequently. Shawn Ray has had his battles with some very iconic members of the bodybuilding world. This list of names includes Chris Aceto, Lee Priest, Jay Cutler, John Romano, and Dorian Yates, just to name a few. In regards to leaving a great, memorable bodybuilding legacy, enemies of this stature are pretty counterproductive. Point being, Dexter taking Shawn’s place as “Mr. Top Five”, coupled with the aforementioned negative vibe which tends to flow from Shawn’s persona, could very well put a serious damper on the overall legacy of the iconic figure that is “Sugar” Shawn Ray.