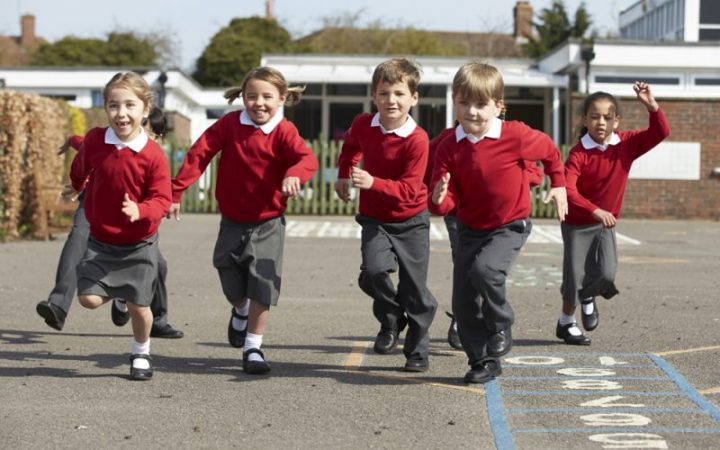 It’s a known fact that kids these days are spending less time outside playing and more time with their face plastered in technology—video games, iPads, iPhones, etc. There are several organizations that are trying to get kids to be more active through play (such as the NFL’s Play 60 program), whether it be after school programs, recreational sports leagues, and now the idea of zoning school playgrounds. Unfortunately, we have a long way to go in achieving “success”.

If you were to watch children playing during recess you would see less playing and more standing around than ever before. Kids simply aren’t as active today as they were when we were kids. It seems like back in the day kids were more imaginative with their play time as well. While kids will say how much they love recess, it’s more for the social aspect rather than the “play”. Sure, you see kids running around being kids—throwing the football, playing basketball, kicking the soccer ball, etc. But then there are groups of kids just standing around or sitting. It’s not gender specific either, it’s kids across the board.

One idea that the University of Missouri came up with was “zoning” the playground into sections. They feel that zoning is a very proactive way to have schools take an interest in children’s health and wellness by making sure they stay active under their watchful eye during the day. Parents are putting their trust in the school, and while not a babysitter by any means, schools do have a responsibility to help teach the kids that go there how to stay active and healthy. The University also said, “Recess is the best way for young children to be active, and through playground zoning, schools can ensure that children are achieving maximum benefits during their recess period.” Ultimately what they are trying to achieve is to have all the children being active during recess rather than standing around or sitting during a time where they are allowed to be active—and be kids.

It is recommended that kids get a minimum of 60 minutes of play in each day for health benefits. Unfortunately, not many kids are reaching that goal these days. By creating zones in school playgrounds, it would create specific areas for activity and games. For instance, there could be a zone for touch football, a zone for kickball, a zone for basketball, a zone for hopscotch, a zone for tag, etc. Creating specific zones might improve the chance of kids engaging in activity during recess by giving them options rather than forcing them to figure out what they want to do with their time. Without zones, kids are left organizing their own “play” with groups of kids which could lead to standing around if nothing is decided on, whereas if there were specific zones set on the playground, kids would just need to make the decision of what “zone” they want to play in.

Source:
Stephen Ball and Jill Barnas. In the Zone: An Investigation into Physical Activity during Recess on Traditional Versus Zoned Playgrounds. The Physical Educator, August 2016