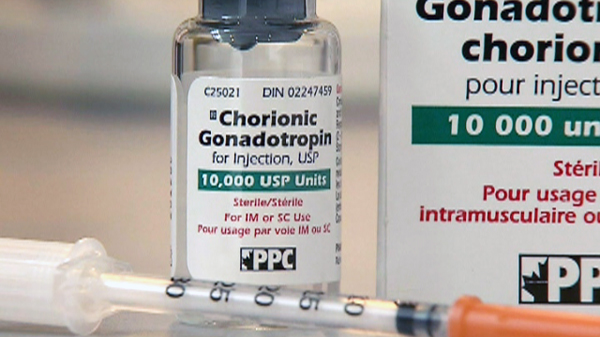 Earlier this month, Drug Testing and Analysis published a research paper on the detection of hCG, purportedly giving anti-doping authorities a considerably greater edge in its detection. While this may be true, careful inspection of the literature reveals that it can still be used undetected. To athletes who are steroid-tested, this is important, not only because hCG will help maintain testicular function on a cycle, and help recover normal hormone levels afterwards, but also because using hCG in conjunction with testosterone can prevent the testosterone to epitestosterone levels from getting too high.

The testosterone to epitestosterone ratio is used to determine when an athlete is supplementing themselves with exogenous (outside) testosterone. But if an athlete is using testosterone along with hCG, the hCG has the ability to keep that ratio within the acceptable limit (*to a degree, this isn’t a license to use megadoses of testosterone). When we see athletes testing positive for hCG, the media typically assumes that it’s being used to restore hormone levels after a cycle (a common use), but it could just as likely be masking the use of testosterone.

Here’s a look at a cycle used by an athlete taking Sustanon 100 (a multi-ester blend of testosterone) combined with hCG: 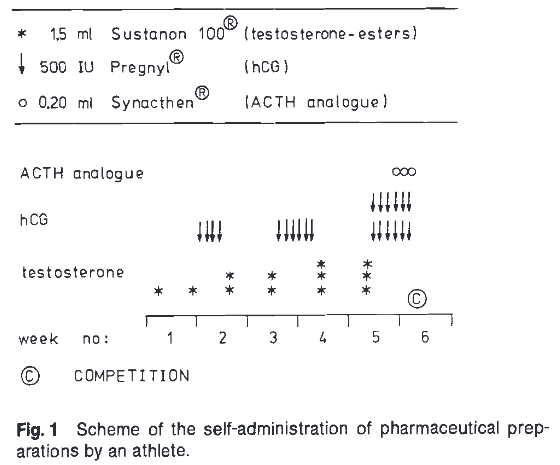 So we can see that in the first week he starts with just testosterone, maintains that dose in the second week while adding 2,000iu of hCG, and so forth…achieving a very high (and very anabolic) level of testosterone by the end point, until his competition in the sixth week.

On the weeks where the athlete used testosterone combined with hCG, the T:E ratio decreased more quickly to levels below the acceptable threshold than in the period without hCG. In addition, there were only three days in this six week cycle where he’d have failed a drug test for exogenous testosterone. However, although the most dramatic decreases in the ratio are seen immediately following hCG use, the athlete takes a whopping 6,000iu dose right before his competition, which would almost certainly cause a dirty urine test for hCG, even though his testosterone to epitestosterone ratio would have been acceptable and returned a negative result for doping.

But hCG itself isn’t the easiest drug to detect…

Working against the testers is the fact that hCG is found naturally within the human body (strike one), and the fact that it’s a fast-acting water-based injectable (strike two). Whenever we have those two factors in play, we’re talking about a drug that isn’t easy to detect: hGH, IGF-1, and testosterone suspension all come to mind. Also, because solo administration of hCG causes large increases in serum testosterone concentrations without significantly changing the testosterone to epitestosterone, simply looking at that ratio wouldn’t detect its use. [Remember, alone it won’t change the testosterone to epitestosterone ratio, but administered in conjunction with testosterone, it will help prevent the ratio from going above the allowed concentration].

Doping tests for hCG are negative below a certain threshold (in this case 5IU/ml), which is assumed to be naturally occurring. Although 5IU/ml is far higher than the level of hCG found in most men, it’s far lower than would be found within a day or two of an hCG injection. In practical terms, just about any drug is detectable if the test is administered within 24 hours. Luckily, if we’re talking about fast acting drugs like hCG, growth hormone, IGF-1, testosterone suspension, etc… the detection window (if any exists) closes very rapidly. But unlike those other drugs, which are only anabolic while they’re circulating, hCG is used to boost another hormone (testosterone), from which an anabolic effect is gained; blood levels of hCG peak within a day, but the boost in testosterone remains for several days. 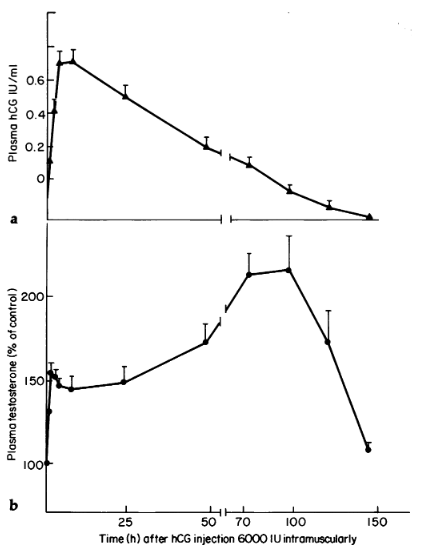 As you can see, hCG is very effective at raising testosterone over the course of several days, but the blood levels of the hCG itself peak within a day, then rapidly decline. To quantify this, the metabolism of hCG displays a terminal half-life between 1–1.5 days. After a single intramuscular injection of 10,000 IU of hCG, blood concentration increases on the first day and decrease exponentially within the first week to ten days (urine levels are very similar), at which point it drops below the testing threshold and will return a negative result.

But most steroid users don’t inject 10,000 iu of hCG at once – they inject half that amount or less.
It should also be noted that hCG is used in a very specific manner (article: Human Chorionic Gonadotropin (HCG): It does more than you think), typically at low doses to maintain testicular function on a cycle, or in a pyramid fashion of descending doses. What makes this noteworthy is that the common doping tests used to detect its use very frequently rely on tremendous doses that don’t really represent how the drug is actually used for doping. Therefore, what we have in hCG is a drug that is very difficult to detect, and can mask another drug that is very difficult to detect.

The athlete above, who was topping off his testosterone with 6,000iu of hCG, would be far better served by a cycle that included a single weekly shot of 250-300mgs of testosterone, which for most people would be undetectable anyway – with maybe a single 500-1,000iu shot of hCG every week to every other week, to keep epitestosterone levels high enough to insure that neither is detectable.

With a strategy of microdosing testosterone with hCG, it’s unlikely that the recent advances in detecting the latter will make much of a difference – while it makes the former almost impossible to detect.