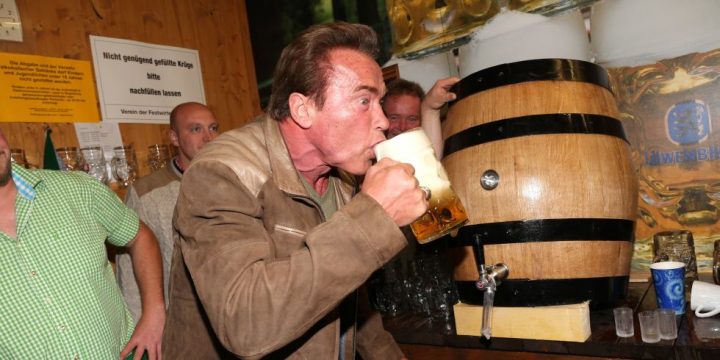 Do alcohol and bodybuilding mix? Is it possible to go out and enjoy some drinks with your friends at that outdoor party, bar, club or on vacation without ruining your progress in the gym? I figured this was a relevant post with summer just kicking off, as it’s always the time of year when I get an influx of questions on this topic. The standard response you’ll hear from many fitness experts out there is that alcohol is an “evil” substance that must be avoided at all costs, as it will destroy your training performance, kill muscle growth and lead to excessive fat gain.

It’s really not that cut and dry though, and the truth is that it completely depends on how much you’re specifically consuming, how often you’re doing it, and how much you allow a night out of drinking to affect your training and diet in the overall picture. In this post I’ll be giving you the straight facts when it comes to bodybuilding and alcohol by discussing its effects on body composition as well as how to incorporate it into your diet in a way that minimizes the potential negative effects.

Let’s jump into it…

Before we go further, there are two very important points you need to understand first when it comes to the topic of alcohol and muscle growth/fat loss… The first is the simple fact that alcohol contains calories. Alcohol itself is not inherently “fattening”, but it does clock in at around 7 calories per gram.

The true value is more like 5.7 calories per gram since it does have a fairly high thermic effect, but if you aren’t tracking the thermic effect of other macronutrients then I wouldn’t bother tracking it for alcohol either. In any case, the bottom line is that the calories from alcoholic drinks need to be taken into account as part of your daily totals just like they are for any other food or drink item in your diet.

If you’re consistently ignoring the calorie content of your drinks (especially if you’re having higher calorie varieties), then obviously that’s going to have a negative effect on your results. The second point is that there’s a distinct difference between alcohol’s direct effects on muscle growth/fat loss versus its indirect effects.

In other words, if you’re allowing alcohol consumption to interfere with the consistency of your overall training and nutrition plan in the big picture, then there shouldn’t be any surprise that your progress will be impeded in some way. For example, if a night out of drinking causes you to binge eat, skip workouts or it simply damages your overall motivation, then obviously it’s something you’ll need to carefully moderate or even abstain from for that reason.

However, these are behavioral changes that are ultimately within your control, and they’re not a result of alcohol itself negatively impacting your results in a direct physical way. So, in order for alcohol and bodybuilding to go together in a manner that doesn’t negatively affect your results, you need to:

A.) Treat alcohol just like any other macronutrient by taking the calories into account as part of your overall intake.
B.) Ensure that your consumption of alcohol does not interfere with the consistency of your training or diet in the overall picture.

Assuming the above is taken care of, what happens if we take an otherwise properly structured and consistently implemented fitness program and then simply add some alcohol into the mix? Is it possible to do this without slowing down the rate of muscle growth or fat loss? Let’s discuss this by breaking it down into two main categories: light/moderate drinking versus heavier/ “higher dosed” drinking.

If you’re simply a casual, light drinker who enjoys a glass of wine in the evening or a few beers with your buddies here and there, this isn’t something I’d worry about at all in terms of its effects on your muscle building or fat loss plan.

Moderate drinking is typically defined as no more than 2 standard drinks per day for a man and no more than 1 for a woman. If you fall into this category, then just make sure that the calories are tracked and you’ll be fine.

Now, what about those nights out of heavier drinking with the actual purpose of getting drunk? This is the category that most people are probably most curious to know about. Although it isn’t a black and white issue with definitive answers, whether or not this becomes a real concern for your bodybuilding program ultimately just depends on how often you’re doing it as well as how you go about it.

As the saying goes, “the devil is in the dose”. As long as it’s happening relatively infrequently (no more than roughly twice per month give or take depending on the individual), and assuming the proper guidelines are employed to minimize the negative effects (I’ll give you a few tips on this shortly), then a heavier night of drinking every now and then probably won’t impede your progress as long as you go about it responsibly.

I’m not saying that it’s healthy for you (this is something you’ll have to weigh out and decide on for yourself), and I’m not saying that it will have zero negative consequences, but the effect from a pure muscle building or fat burning perspective would probably be minimal if anything. If you’re a high level athlete trying to squeeze out every inch of possible progress then that’s a different story, but for the average gym goer it’s likely not going to be much of a concern as long as you know what you’re doing. 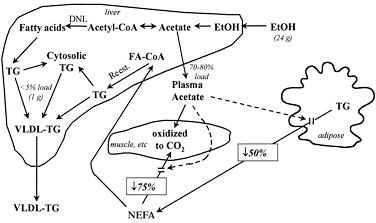 The main issues that are usually brought when it comes specifically to alcohol and bodybuilding are its effects on testosterone levels, protein synthesis and overall recovery. However, most of these negative effects tend to be heavily exaggerated and aren’t nearly as significant as many would have you believe.

The research on alcohol and testosterone is fairly mixed with studies showing everything from:

In other words, even when a large amount of alcohol is consumed, the decrease is still relatively modest and returns to baseline fairly quickly. When it comes to testosterone and its effects on muscle growth, it’s your overall levels in the big picture that truly matter as opposed to modest, temporary up and down spikes. For example, having your test levels dip by 10-20% for half a day once or twice a month is probably not going to make any noticeable difference to your long term gains. It certainly isn’t going to help, but the difference would be so marginal that you almost certainly wouldn’t even notice it.

Alcohol and protein synthesis rates have only been studied in chronic alcoholics, and even then the results are still mixed with no clear cut answers. Anyone who definitively claims that alcohol lowers protein synthesis would be basing it on rat studies, and humans and rats process toxins and nutrients quite differently. It’s reasonable to assume that there would probably be some negative effect as a result of heavy consumption, but as with testosterone, it would probably be modest and short-lived.

The only research showing impaired recovery as a result of alcohol consumption is when particularly high volume, exhaustive work is performed such as heavy eccentric-only training or endurance training. Other studies using lower volume protocols did not replicate these effects and showed no difference in recovery rates.

If recovery is an issue of concern for you and you want to be fully on the safe side, then as I’ll be mentioning below, you can reduce the possible negative effect by ensuring that you separate your weight training session and “drinking session” onto separate days.

5 Tips To Drink Without Hurting Your Progress

With all of that out of the way, here are 5 practical guidelines I’d recommend following on those nights out of heavier drinking to minimize the damage…

Dry wines and spirits mixed with low calorie or zero calorie liquids are going to be your best bet here. If you’re aimlessly slamming down a bunch of sugary drinks or heavier beers throughout the night, you’re going to end up dumping a ton of extra calories into your diet which can definitely add up pretty significantly. It’s not that you can’t have those higher calorie drinks if you enjoy them, but just be aware that there are better choices than others when it comes to keeping the calories under control. My personal drinks of choice on a night out are usually a simple vodka/water with lime, or rum and Coke Zero.

2.) Maximize the time between your weight training sessions and alcohol consumption.

In an ideal world you’d avoid training on the same day as well as on the day after a heavier night of drinking. That way your recovery from a previous workout wouldn’t be negatively impacted, and your performance on an upcoming workout would also remain relatively unaffected. However, if it’s not possible to do both then just do the best you can to space them out as much as possible.

Since acetate (the toxic component of alcohol) inhibits the body’s fat burning processes when consumed, fat in the bloodstream is more readily absorbed any time you drink. You can minimize this effect by lowering your fat intake down on the days when you’ll be drinking. There’s no exact guideline set in stone here, but cutting it down to around half of your normal fat intake would be a reasonable approach.

Most people probably don’t need me to tell them this, but make sure to drink plenty of water throughout the night as well as before going to sleep. Alcohol is extremely dehydrating, and this will go a long way in minimizing any potential hangover and allowing you to recover faster from your night out.

5.) Save up calories for later in the night.

If you’re someone who is prone to binge eat after a night of drinking, make sure to lower your calorie intake down earlier in the day in order to save some up for later on. Your willpower will probably be decently impaired by the end of the night, and allotting a higher percentage of your daily calories to this period will help to keep you from going overboard.

The Bottom Line On Alcohol And Bodybuilding

Just because you’re trying to build muscle and lose fat doesn’t mean that you can’t go out and enjoy some drinks with your friends every once in a while if it’s something you have fun doing. You simply need to maintain some reasonable moderation with it and ensure that you go about it in an intelligent, responsible way in order to minimize its negative effects. Assuming your overall training and nutrition plan remains otherwise unaffected in the big picture, heavier nights of drinking once in a while are unlikely to have any noticeable effect on your long term results, while casual drinking (1-2 drinks per day) is certainly nothing to worry about.

Once an awkward, out-of-shape “social outcast”, Sean Nalewanyj is now a renowned fat loss and muscle building expert, best-selling fitness author and success coach. Through his mega-popular websites and his information-packed online email lessons, Sean has helped tens of thousands of average, everyday people from all over the world burn fat, build muscle and get into the best shape of their lives. Sean is a lifetime natural bodybuilder, has written articles for dozens of the top muscle-building and fat loss websites across the Internet and is recognized as an expert authority on the subjects of building muscle and burning fat fast. 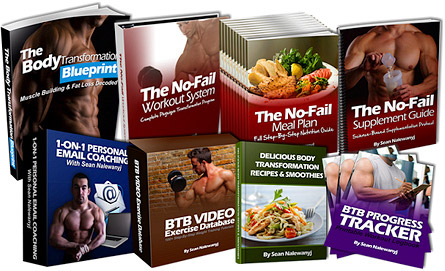