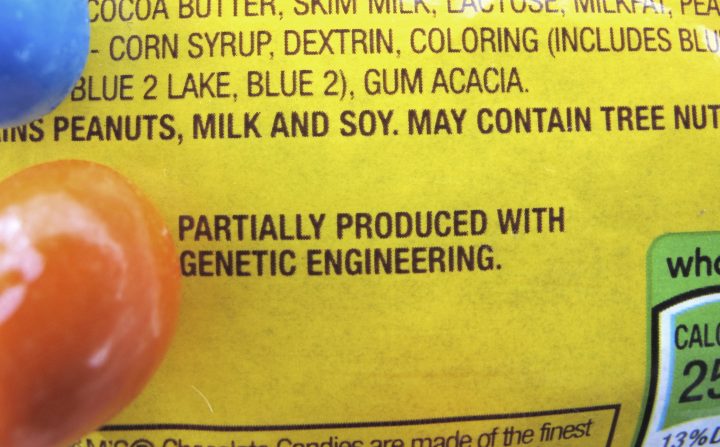 President Barack Obama put into place a new law that forces companies to openly disclose any GMOs (genetically modified organisms) in their products. This sounds like good news, right? Kinda, but not really. Huh? What? Let me explain.

With this new regulation hitting food manufacturers across the United States surrounding the federal label requirements, it forces companies to be open about what they put in their products—especially if what’s in the products are potentially harmful to consume. BUT, the new law allows these food manufacturers to disclose this information through a QR code on the packaging, not through words on the actual packaging that anyone can see by simply picking up the product. Not only is this deceptive, but it truly shows how low a company would be willing to stoop in order to hide what’s really in their products. Wouldn’t you assume anyone who puts the QR code on their packaging is basically showing they are guilty of putting GMOs in their product? I would. If there’s nothing to hide why can’t they simply state “GMO FREE” on their packaging? A QR cod shows there’s something in the product that they need to disclose.

As mentioned above, GMOs are genetically modified organisms. These are foods that have had its DNA altered from its natural form. GMOs have not been proven safe, and for that reason consumers need to know if GMOs are in products they are purchasing so they can make their own decision if they want to consume a product that could potentially have negative health risks.

Up until this point, the United States has not truly enforced a ruling that would make companies disclose such information about their products. Some states have passed their own laws enforcing full disclosure of GMOs, but nothing on a national level like there needs to be. Other countries have, however, already introduced GMO labeling—the US is simply playing catch-up once again.

Through proper labeling of GMOs, consumers can make informed decisions about what products they want to purchase and which products they want to stay away from. This can stem from personal beliefs, religious, cultural, moral, health, environmental, as well as economic reasons to name a few.

A poll was conducted that showed more than 90% of American’s want transparency when it comes to GMO labeling and would prefer to have it properly marked on packaging.

What does this new bill and the ability to use a QR code mean?

Without sugar coating it, it allows food companies to hide all the terrible things we are putting into our bodies if we consume their product(s). And there are many food companies who are supporting the use of QR codes as a way to get around this new law that the President put in place. So while we are taking one step forward in enforcing companies to fully disclose what’s in their products, we are taking two steps backwards as you need to have a smartphone and QR code app in order to do so.

So what if you don’t have a smartphone (as odd as that may sound these days)? How can you figure out on the spot if there are GMOs in the product? Ask someone who has a smartphone if they can scan the code for you… for every product you pick up? Doesn’t sound like that is going to make you any friends at the grocery store. Or what about the elderly who can use a phone to make a call but apps are like a foreign language to them. They are lucky if they can figure out how to use the calculator on a smartphone let alone get to the QR reader, open it, line up the code in the designated area, and then wait for the information to pop up. That’s simply not going to happen.

Something else to think about is the grocery store itself—as in the four walls surrounding it along with the roof. Depending on what the walls are made out of, your smartphone might not even get service or the internet in the grocery store. So if that’s the case you have no way of scanning the QR code anyway since the internet won’t work. It’s another piece of this bill that was clearly overlooked.

All in all, this is a colossal failure in my opinion. Not only are people who have a smartphone not going to use it, but those who don’t have a smartphone obviously can’t use it. So really who is this benefiting other than the food manufacturer who is able to hide their GMO use? The President needs to go back to the drawing board and change the bill to state that information regarding the use of GMOs must be written (in text/words) clearly on the product packaging.

Will this new law benefit American’s?

Absolutely not. Let’s be honest, we live in a society where most people don’t even look at the nutritional label on products. Do you really think that people will take an extra step by getting out their smartphone, open up a QR reader, scan the code, and figure out if there’s anything in the product they shouldn’t consume? Not a chance. This is yet another slap in the face to people across the US who actually care about what they are putting in their body. While the bill makes it seem like the President is putting something in motion to help us, it in fact does nothing at all. The only thing it did was put ink on paper that got pushed across the desk.

This bill is also missing one key piece of GMOs. While the bill forces companies to disclose if they used GMOs in their product, what they don’t need to disclose is if (assuming it’s an animal product) the animal was fed feed that was genetically modified in any way. So while the manufacturer didn’t add any GMOs, that’s not to say the food source wasn’t flooded with GMOs prior to packaging. Yet another thing to shake your head at regarding this new bill.

So what can you do?

It’s actually pretty simple… Don’t buy products from companies who have these shady business practices by putting QR codes on packaging rather than simply stating they use GMOs. If a company isn’t willing to be transparent and tell you what’s in a product you’re about to purchase and consume, why should you believe the product is good for you? If they have nothing to hide it should be an open and shut case where they are willing to put on the packaging that there are no GMOs in their product. Plain and simple. If they have to hide information through a QR code they simply can’t be trusted—I don’t care who the company is.

Ultimately the choice is yours. But me, personally, I refuse to buy anything from a company who is willing to be deceptive and not state clearly on the packaging any GMO use in their product and would rather hide it behind a QR code.