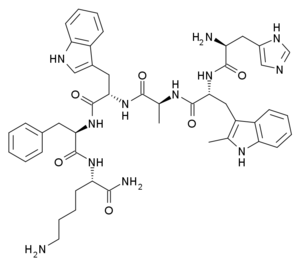 Hexarelin is a growth hormone secretagogue developed by Mediolanum Farmaceutici, and as its name might suggest, is is a hexapeptide that causes the body to release more growth hormone. It’s bioavailable through numerous methods of administration (in descending order of potency): intravenous, subcutaneous, intranasal (don’t bother), and oral (don’t bother) administration. (1)

Although it is an analogue of GHRP-6, and both ultimately do the same thing (cause your body to release growth hormone), Hexarelin doesn’t cause the extreme hunger, despite potentially being the most effective drug in this class (at least in terms of elevating growth hormone secretion).

If I were to do an injectable GHRP again, it would be this one. This is because while I believe that the average person will gain a substantial amount of fat from most growth hormone releasing peptides and secretagogues, Hexarelin distances itself from the pack in this regard. Increases in body fat are almost never reported with this drug, either in studies or from user-feedback. Most drugs that rely on stimulating the ghrelin/growth hormone secretagogue receptor will cause a huge increase in appetite and ultimately weight gain (with an unacceptable percentage being fat), but this hasn’t been the case with Hexarelin.

Increasing ghrelin (often referred to as the “hunger hormone”) or stimulating the ghrelin receptor is a very expedient way of putting on a thick layer of fat in a very short time. Painting in broad strokes, secretagogues and GHRPs tend to rely on this mechanism of action, and many cause this kind of (bad) weight gain, but Hexarelin appears to be somewhat selective in how it operates, and I’d suspect that it somehow doesn’t affect ghrelin the same way as the other drugs in its class. The short version of this story is that even if other GHRPs cause you to gain fat, Hexarelin probably won’t.

Despite this, Hexarelin is very efficient at increasing growth hormone secretion, even more so than growth hormone releasing hormone (2), possibly owing to the fact that it’s a second generation drug in this class. If you think of GHRP-6 as being a step away from ghrelin, Hexarelin is yet another step away (and more refined).

Counterintuitively, Hexarelin only provides a slight boost in IGF-1 levels(2), but stacks well with GHRH itself, with the combination providing a huge surge in growth hormone (3-5). Again, oddly, administering growth hormone with Hexarelin will make the latter less effective, as will using it with IGF-1 (6).

In children, it appears that the addition of injectable testosterone can make Hexarelin even more effective at elevating growth hormone (7,8), although the same effect does not hold for oxandrolone (Anavar)(8). If I were to guess, and we were applying the available scientific data to athletes, I’d say that Hexarelin would ideally stack well with most aromatizing androgens (anabolic steroids that convert to estrogen, like testosterone), as the data strongly suggests that the GH response to Hexarelin is mediated by estrogens (8).

As you’re probably starting to suspect, Hexarelin isn’t one of the drugs we can add into any cycle and expect to get results. It’s use should be meticulously planned, to avoid using with anything that might reduce its effectiveness or itself be reduced in effectiveness. Currently, the best evidence implies that it should preferentially be stacked with aromatizing androgens, and used without GH or IGF-1.

A partial but reversible attenuation to the GH-releasing effects of Hexarelin will occur with extended use (in the neighborhood of a 50–75% decrease in efficacy over the course of 4-16 weeks).However, a four week break is enough to re-sensitize and regain the compound’s efficiency (9) . If I were using this stuff regularly, I’d probably be doing a month on with a month off, or at most two months on with a month off.

Unfortunately, trouble comes into paradise when we examine the totality of evidence… clinical data indicating that helps burn fat or build muscle is lacking. And I mean severely lacking. None of the studies I’ve seen have shown an appreciable gain in muscle – however, user feedback has been quite robust in this area, as the drug has been available for several years now, and I’m willing to bet that people are gaining a bit of muscle and strength from this stuff, even if it’s just because of its recuperative properties (higher quality sleep, etc…).

Two micrograms per kg of bodyweight (intravenously) seems to be near the upper limit for producing a growth hormone response (2), but I’ve never heard of anybody using a bodybuilding drug (i.e. a non-opiod) that way. But given the 75-80% bioavailability of Hexarelin via subcutaneous administration, and based on the GH levels I’m seeing via different mtehods of administration, those shooting subcutaneously, are going to require 3 micrograms per kg of bodyweight, for the maximal response.(1)

Some users report splitting their dose into halves throughout the day, and this is how some of the studies have been done, but there seems to be a degree of waking lethargy to this method, causing many users to opt for evening shots only.

Newer Post
The Last Rep with Bob & David – Episode 10
Older Post
Ravenous or Repulsed; That is the Question