by Matt Weik Who doesn’t like ice cream? I mean seriously... Summer… Winter... It doesn’t matter (to me at least). If you put ice cream ar 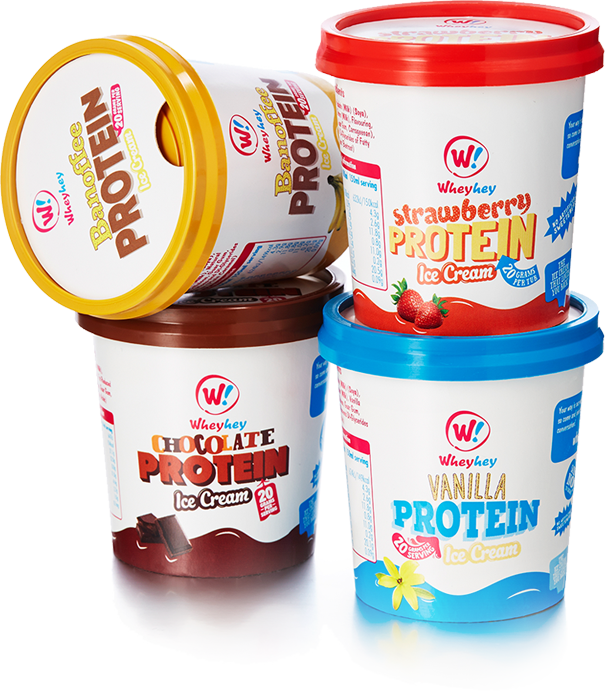 Who doesn’t like ice cream? I mean seriously… Summer… Winter… It doesn’t matter (to me at least). If you put ice cream around me, the gloves are being thrown down and I’m about to do battle with a spoon as my weapon of choice. But in all seriousness, we know how people not only in the US but around the globe love their ice cream. Vanilla, chocolate, strawberry, coffee flavor, you name it, it’s being spooned into our mouths. It’s that moment after we eat a bowl, or two, or the whole damn carton that we look back and think about what we had just done. The regret and remorse starts setting in as your blood sugar levels begin to skyrocket and you know you screwed up—big time.

But what if you could eat ice cream without the guilt or regret? You now actually can, but only if you live in the UK—sorry US, we have to wait for the time being. A company called WheyHey has come onto the UK scene around four years ago and turned the protein market upside down with their new line of products. They created a healthy ice cream that is sugar-free and high in protein. The price per 500ML carton of WheyHey High-Protein Ice Cream is £6.50 or $7.16 (when converted to US dollars). One of the founders said, “Our goal was to offer a healthy alternative to the rubbish food companies put out there. We wanted to be the Red Bull of the freezer aisle. It has zero impact on your blood sugar levels, provides 20g of protein [isolate], tastes great and offers a real alternative to eating high-sugar, high-fat ice cream.” They believe they have a leg up on their competition and said where many companies in the space fail is with their nutritional profile and taste—key components to success in the functional food space. WheyHey owners have done everything possible to get the product to where it is today. There was much trial and error to get the taste and nutritional profile to exactly where they wanted it.

Where most start-up companies have difficulties getting distribution, WheyHey has totally exploded overseas. You can now find them in GNC, Holland & Barrett, Wholefoods, Tesco, Revital, Nuffield Health, As Nature Intended, and also online at www.musclefood.com. WheyHey has been comparing themselves to Red Bull in every way and after three years they compared where they were in relation to where Red Bull was in their first three years and realized they are lightyears ahead of Red Bull—which quite frankly is amazing considering around 90% of all start-up businesses fail within the first two years. WheyHey owners aren’t afraid of taking a risk for a chance at a huge payoff. In a world where candy, popcorn and sodas are the main attraction, WheyHey signed a deal with Odeon cinemas to get their ice cream at the concession stands. Now people have the choice of a healthy alternative that looks and tastes like a treat, but slammed with 20g of high-quality whey protein isolate. Will people buy it? Probably. But most of those who purchase it will probably be those health conscious individuals or people who literally think it’s normal ice cream without looking at the label or packaging.

As it stands right now the product is very niche. While that works as a start-up business, their overall business model needs to be clearly defined as to how they are planning on taking WheyHey to the next level—such as mass market. Meatheads across the UK are rejoicing for sure that they have an ice cream that packs 20g of whey protein isolate, but how far will the brand continue to go and grow with such a small piece of the market? Again, comparing themselves to Red Bull, their next move is clearly to expand into mass market. Quite possibly, they may want to consider the gym market in the UK, college campuses, and the mom and pop supplement and health food stores as well. The specialty channel of health and fitness can be very lucrative. WheyHey is already in large retailers over there but they could also pick up a lot of sales through other pieces of the fitness industry. Or better yet, bring it to the US! I’ll purchase it by the case (I’m not even joking). It’s a very simple shut up and take my money strategy with me.

A market analyst mentioned, “Products like WheyHey appeal to the person aged 20-40 who is committed to fitness and have very limited appeal to a wider consumer market. People don’t associate protein with ice cream and the biggest lesson companies have learned over the last 20 years is that an ingredient has to be credible in the product format for people to accept the product. Ice cream is all about indulgence and pleasure and every effort to make ice cream products healthier—from frozen yogurt to low-sugar ice cream and low-fat ice cream—has resulted in niche performances. Selling ice cream for health and fitness lacks appeal for all but the group of consumers who are most motivated by the ingredient. Protein ice cream is ideal for a niche protein-seeking, ultra-health-conscious fitness enthusiasts who aren’t so driven by pleasure and naturalness. There’s no reason why WheyHey can’t be a successful niche brand and achieve total retail sales of €30-40 million. That would be a great business. But that’s also likely to be the growth ceiling for one brand and there’s probably only scope for one such brand per country.”

While they mentioned they aren’t going to rush into new regions or countries, the United States is indeed on their radar thanks to the Thrive program found in the Silicon Valley. We should definitely expect to see WheyHey hitting our stores in the future as soon as they figure out their strategy for expanding into the US. To close things out, one of the founders said, “The world needs to not only produce more food between now and 2050 but also educate people on eating more healthy. We’re staring down the barrel of a health crisis with diabetes, metabolic syndrome and obesity. Moving forward, we see ourselves as a key player in this context. You think of any indulgent product—we will offer an alternative. We want to take on every channel in the supermarket. We started out saying we wanted to be the Red Bull of the freezer cabinet. Now we want to go beyond that.”