Getting More by Going Bare: A Look at Barefoot-Mimicking Shoes

by Matt Weik The craze that we have all been hearing about is really nothing “new”. These types of ideas and products have been around since t 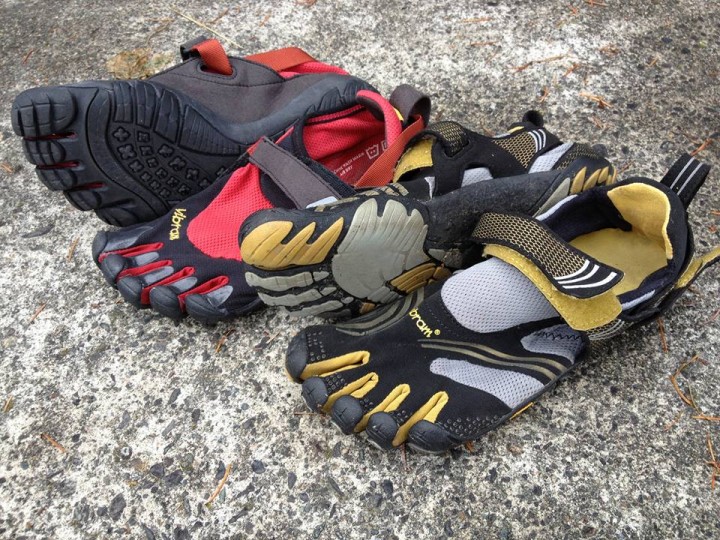 The craze that we have all been hearing about is really nothing “new”. These types of ideas and products have been around since the late 1930’s thanks to a man named Vitale Bramani. Vitale created the first rubber lugged shoes used for mountaineering. It is because of this new concept, Vibram shoes have conquered many of the world’s tallest peaks.

To fully understand why anyone wouldn’t want those air-filled sacs under their normal running shoes, let’s first understand more about the foot/ankle. The feet combine not only structural strength but also mechanical intricacy whereas the “shock absorber” and foundation of a running movement comes from the ankle. The foot alone contains ¼ of the body’s bones (26 bones in each foot). Along with all those bones come 33 joints and more than 100 muscles, ligaments, and tendons per foot. Together they work to help you move in all directions and maintain your stability and allow for propulsion.

There are many different types of running styles—heel striking, forefoot striking, and midfoot striking. All of these styles exert different forces on the body, forces that can hinder performance, biomechanics, and can also increase the chances of injury. The style that causes the largest forces on the body is heel striking. This method is where the heel strikes the ground and then the rest of the foot follows. This method actually sends the forces all the way up the body (not ideal). With forefoot striking the front of the foot touches the ground first with the rest of the foot following. This exerts the lowest amount of forces on the body (a good thing). Lastly, midfoot striking is when the heel and the ball of the foot hit simultaneously. Because the forces are spread out over the whole foot rather than a specific sections the forces applied to the body can either be similar to a heel strike or less depending on where the center of pressure is during impact with the ground (which causes many problems with the lower body and makes those wearing such a shoe more injury prone). These forces can cause issues in the feet, ankles, shins, knees, and hips.

So why not get shoes with the best cushioning available? Those comfortable shoes that feel like you’re standing on clouds actually put your feet in an unnatural position while running—forcing you to lengthen your stride and due to the increased cushioning in the heel actually changes the biomechanics of the whole body. Many who run with these “cushiony” shoes are heel strikers which even with all that cushioning, still causes large forces on the body with each stride. So should you throw away those $150 brand name shoes you just purchased? No, I’m not saying that. What is trying to be portrayed here is that many shoes of today actually put us in an unnatural position for walking and running (or anything involving movement with the feet). The extra height in the heel of a shoe shifts our center mass and puts more pressure on our hips, knees, and lower back which long-term could cause injuries. Given all the studies that have been published on barefoot running and its benefits not only on performance but from a biomechanical standpoint with the body should be enough to have people at least give these “minimalist” shoes a try. Are they for everyone? No. But don’t judge a shoe by its appearance. Although they might not look like the shoes you have on your feet now, don’t overlook these gems when looking for a new pair of shoes to wear during outdoor activities. They can actually help strengthen the muscles of the legs and feet, help improve foot health, and help reduce the risk of injuries. Also, due to there not being a heightened heel pad, these types of shoes allow you to have better posture which helps keep the body in line.

When it comes to athletic performance, any slight advantage can help take you to the next level. Barefoot running has shown to help strengthen the feet. While most of us today wouldn’t feel comfortable running through trails barefoot, these types of minimalist shoes can come in very handy. Being that having a natural feel on the bottom of your shoe to give you good response is key when getting as close a feel to barefoot running as possible, Vibram seems to keep getting better. The sole gives just enough between you and the outdoors to keep your feet protected but still minute enough to allow your foot to move as if you weren’t wearing anything at all—allowing the feet and toes to bend and curl. Overall this can greatly improve your performance by allowing you to engage in activities the way your feet were meant to be used. Being that the Vibram shoes themselves are so lightweight, it cuts down on the work the body needs to do to function with shoes on. Think of it as trying to run in steel-toe work boots and then trying to run in your bare feet. The extra weight coming from heavy shoes puts extra strain on not only the muscle of the lower body and lower back, but also on all the joints. Vibram seems to have found the niche that can benefit athletes and has all the studies to back up how mimicking barefoot activities can improve performance.

Vibram continues to look at what athletes’ needs are in terms of footwear. They have been steady in coming out with products that meet the demands of even the most intense conditions an athlete can endure. They are especially looking at what runners and fitness-minded individuals need. Let’s take the squat for example. As you know, squatting barefoot is the best way to squat—same goes for the deadlift. Why you ask? Having cushioning underneath your feet while have a load on your back or in your hands causes instability. This instability forces your feet, ankles, and knees to take a lot of unnecessary forces. Having a heel that is raised also puts your body out of alignment which also puts extra forces on the knees and lower back and could cause injury. With minimalist shoes, you are able to get that barefoot feel and put your body in a more natural position to complete the movement. Going back to the squat movement, you are told to push through your heels during the movement, when wearing shoes with cushioning you don’t get good feedback from your feet on the positioning and pressure on the heels—however, with minimalist shoes you get great feedback of the positioning of the feet and pressure on the heels. This sensory feedback can greatly help you during the lift.

To add to all their success, Vibram seems to have nailed it on the head with their XSTrek rubber soles. They have been so popular on the market for having superior slip-resistance that other companies such as New Balance (their multisport boots), Burton (their snowboarding boots), Nordica (their alpine freeride boots), and Timberland (their hiker and multisport shoes) along with many other brands (Danner, La Sportiva, Lowa, Merrell, Red Wing, Scarpa, The North Face, Vasque, Wolverine) all have used Vibrams rubber soles on some of their shoes. When active in the outdoors your confidence in footing translates into how well you are able to perform. With the new XSTrek soles, footing is no longer an issue no matter if you’re pounding the pavement running or jumping over logs and rocks while hiking.

With all this new technology that Vibram has introduced, they haven’t lost focus on the materials they are pulling from the environment. In fact, they introduced a new ecopolicy to help renew and reuse materials in their everyday business. They are so serious about keeping the company as green as possible that they are looking to use “100% (recyclable and oil-free) natural compounds, biodegradable TPU and rubber compounds, as well as recyclable PU and TPU products.” Their EcoStep sole has 50% recycled rubber in it. On top of that, everything that is found in their office, if it has an ecofriendly alternative, they have it—such as organic cotton shirts, office supplies, pens, etc. “Energy consumption and new building construction are also as green as possible. The new Vibram Technological Center (VTC), a research and development center in Guangzhou (China) is equipped with solar panels and water heaters to save on fossil fuel. And since early 2008, Vibram USA has contributed to the development of wind energy through the purchase of wind RECs (Renewable Energy Credits) to offset their electricity consumption. Additionally, the Vibram North America production site has developed a full line of green products for flooring applications based on 100% recycled rubber. Vibram has recently joined the eco-sustainable project “Lifegate – Zero Impact,” making contributions to compensate for part of their CO2 emissions. Through Zero Impact, they finance the planting of new forests and have planted approximately 6.118 square meters of trees in Costa Rica.” With all the efforts put in place, it is clear that not only does Vibram care about its consumers, but also the environment. All of this goes with the company’s minimalist philosophy.

I for one have been very skeptical of minimalist shoes. Not only did I think they looked “odd” but I also thought having near to nothing on your feet can’t feel “normal” after wearing shoes my whole life. However, my whole image changed after reading up on some studies about barefoot running and then finally purchasing my first pair. 3 pairs of Vibram later and I’m still in love from the first time I put my foot in them. It takes some time to get used to putting your foot in each shoe and making sure your toes are separated, but once you get the hang of it you will find it just as easy as tying your shoe laces. I wear them all the time and find them to be more comfortable than the $150 pair of brand name shoes I had purchased thinking all the air and cushioning would be better than “minimal” cushioning. I couldn’t have been more wrong. Once the shoes are on you don’t want to take them off—that is how comfortable they are. Don’t take my word on it, the countless awards they have won, or the millions of pairs they sold—give them a try for yourself. I’m willing to bet after you give them a chance, you will never look back.

Some information found in this feature has been supplied directly by Vibram to the author for the sake of educational and informative purposes.