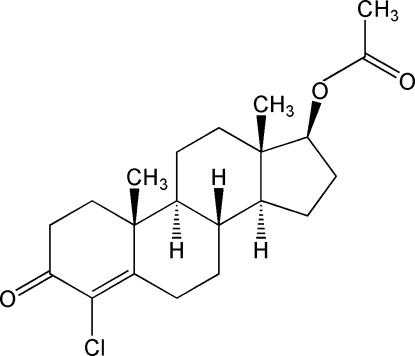 Clostebol is an old anabolic steroid that wasn’t very popular outside of the former German Democratic Republic. In it’s original incarnation, it was known as Megagrisevit-Mono, and was comprised of the parent hormone clostebol (4-chloro-testosterone) attached to the acetate ester.

The acetate ester is unique in the fact that it can be attached to a parent hormone to either produce a short acting injectable compound (think Trenbolone acetate), as well as an oral version (as we see with Primobolan tablets, aka Methenolone acetate). In terms of mass produced anabolic steroids, Primobolan is the only one (off the top of my head) that I can think of, where an acetate ester is used to make a pill. Injectable Primo was only produced (by legitimate pharmaceutical firms) with the Enanthate (long acting) ester.

In fact, the only other steroid commonly attached to this ester is Trenbolone, which although some underground labs offer in pill form, is most commonly found as an acetate in Finaplex pellets – yes, these are the pellets that ranchers inject into cattle to increase slaughter weight. Although it would seem logical that Finaplex pellets could be eaten, I’ve almost never heard of anyone doing that, with most users choosing to grind them up and homebrew their own short-acting injectable. Conversely, I would assume that most athletes subject to drug testing, and using clostebol, would opt for oral ingestion to reduce clearance time. This is what we typically see with drug-tested athletes using winstrol (stanozolol), which is a steroid that features methylation for oral use, but is also available as an injectable (yes, you can simply drink the injectable form of this steroid).

The original German version of Clostebol was available in both the oral form (a 30 pill box with 15mgs/pill) and injectable form (a 1.5ml vial that contained 10mgs). There is no difference between the two versions other than one being a solid and the other being a liquid. Testosterone, of course, is available with methylation for oral use, as well as a variety of esters for injection (and an oil-based ester capsule that generally isn’t the same ester used in the injectable versions). But with testosterone, we are talking about the most commonly prescribed anabolic steroid in the world, and literally zero pharmaceutical firms produce it with the same ester for oral as well as injectable use. Therefore, Clostebol (which is just testosterone with a 4-chloro substitution), is considerably unique in the fact that it utilizes the same ester for both injectable and oral use. This also makes it harder to detect as an oral, as it doesn’t produce long-acting methylated metabolites.

However, the German version is no longer produced (it was made by Pharmacia), nor is Steranabol an Italian version of the product, which contained 20mgs/ml in a 2ml ampule). In practical terms, the legitimate pharmaceutical preparations of clostebol were expensive, inadequately dosed, and not very popular for athletes outside of Germany (obviously that last statement has changed in recent years). 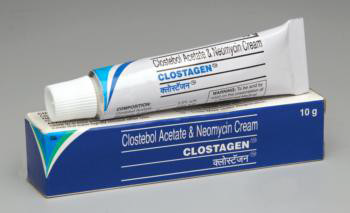 Besides the (legitimate) oral and injectable versions of the drug (which again, have been discontinued), it’s been produced in a bunch of wacky forms that I can’t imagine are very popular with athletes: an intra-vaginal pill, a bunch of different cremes, and even an intranasal spray. The intranasal spray might offer some additional protection against drug tests, as it would be rapidly absorbed and cleared. However, the trade-off is that it wouldn’t be active for very long, and I’ve never heard of it being made available on the black market. Obviously this also holds true for the intravaginal pills and cremes (the latter of which has been proven to cause accidental crosscontamination through sexual intercourse). Therefore, I assume that whatever forms of this drug are in circulation on the black market, are from underground labs or rogue chemists exclusively. It could also be noted that the underground has produced a version with the enanthate (long acting) ester, but this is almost certainly not what is being used by athletes, and is more likely to be used by recreational bodybuilders.

Clostebol (once again, and not considering the ester) is simply testosterone with a 4-chloro substitution in the A-Ring. This has the effect of preventing aromatization, which is the conversion of testosterone to estrogen. So, in the simplest of terms, what we are looking at is a form of testosterone that doesn’t convert to estrogen. While this might sound great, it’s important to note that the conversion of testosterone to estrogen actually imparts many beneficial effects, not the least of which is an increased anabolic (muscle-building) capacity. Of course, there are a lot of potential drawbacks to steroids that convert to estrogen, not the least of which are gynecomastia (development of female-like breast tissue), water retention, and additional/increased suppression of natural testosterone levels. That last side-effect occurs with every steroid, but it seems to be worse with the ones that have a high rate of conversion to estrogen. 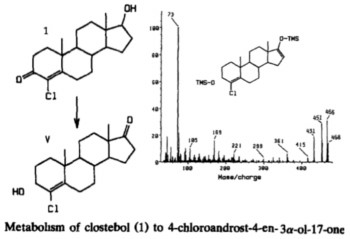 Also of note is that the oral form of Clostebol isn’t really liver-toxic. This is because it makes use of the acetate ester instead of the more traditional (and effective) c-17 alpha alkylation that we typically find on oral steroids. Unfortunately, the acetate ester, while providing a degree of protection for the drug’s first pass through the liver, isn’t very efficient…so while the 4-chloro substitution does nothing to enhance oral availability, it does increase resistance to aromatization, as well as resistance to 5a and 5b-reduction (conversion to an active dihydro metabolite and an inactive/nonanabolic metabolite, respectively). The aforementioned 5a-reduction (conversion to a dihydro metabolite) is generally thought to be why certain steroids (which are 5a-reduced or dihydro versions per se) are thought to cause acne and hair loss.

Still, it’s been a relatively under-researched anabolic steroid, so human data on its actual effects is somewhat limited. In fact, until 1993, there was almost no information on the metabolism of clostebol. despite the fact that anabolic steroids had been banned at the Olympic Games since 1976 (testing began in 1984). In 1993, the first paper examining clostebol’s metabolites was published – although hardly any had been characterized, and anything resembling long-term detection was limited to virtually one major metabolite (4-chloroandrost-4-en-3a-ol-17-one). Until recently, this meant that the detection window was relatively small (despite oft-referenced online “detection times”). However, as of 2016, new technology has increased the detection window to at least 31 days. Oddly, for steroid that has (until very recently) proven to be remarkably difficult to detect, it can easily cause a positive result through consumption of tainted meat products. 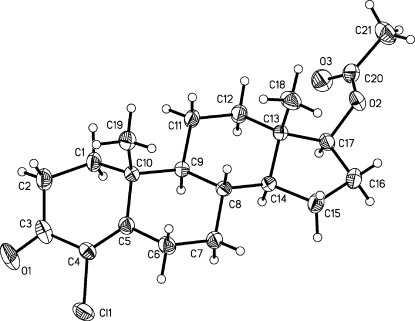 In this respect, clostebol has been compared to milder steroids such as Primobolan, and this seems logical as clostebol acetate has an anabolic/androgenic rating of 46:25, while Primobolan (also acetate) has a rating of 88:44-57. To put this into context, testosterone is a 100:100. So as you can imagine, Clostebol isn’t the first choice for professional bodybuilders, powerlifters, strongmen, or anyone needing huge amounts of mass or strength (and not subject to a legitimate doping control program). Also lending to its lack of popularity with non-tested athletes, is that it’s somewhat obscure and (as a result) expensive.

So while clostebol is relatively weak, expensive, and rare, the trade-off is worth it to many, who are looking to avoid side-effects…and perhaps beat a drug test. Currently, it’s available on the black market, with both the acetate ester as well as a more long-acting form, which features the same closetebol hormone attached to the enanthate ester. The former would be expected to have an active life of a few hours if consumed orally, or a couple of days if injected. The long-acting enanthate version would necessitate once per week injections, and would be virtually inactive if consumed orally.