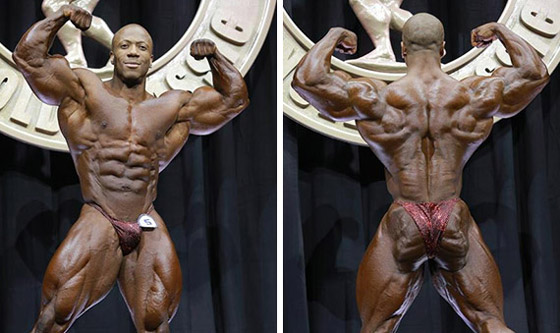 The 2016 Mr. Olympia contest is shaping up to be the most competitive rendition of the show in nearly a decade. Not since 2009 have we had so many competitors with a realistic shot at placing in the top two in bodybuilding’s most prestigious event. Two such competitors are Shawn Rhoden and Cedric McMillan. With all of the hoopla surrounding bloated stomachs and modern bodybuilders getting to big, Shawn and Cedric are a breath of fresh air. These are two guys who have nice tight waists, beautiful lines, and classical posing styles. With Phil Heath showing some very obvious vulnerability the last couple of years, Shawn and Cedric, who are both taller, heavier, and possess superior v-tapers to Phil, may spell serious trouble for the five time champ this year. Assuming the top call out at the 2016 Mr. Olympia includes Shawn and Cedric, who stands a better chance of defeating the seemingly untouchable Phil Heath? One way to find out is to pit these two against each other shot for shot.

These are two competitors who are no fun to stand next to in the quarter turns. This round is essentially a silhouette contest, which tends to award qualities such as shape and flow more so than pure size or granite hard conditioning. If I were Phil Heath, the last thing in the world I would want is to stand in between Shawn and Cedric in a round of quarter turns. Shawn is essentially unbeatable in the front and side quarter turns. His legs from the side garner memories of the great Ronnie Coleman, and his waist, when in control, is all but non existent. That said, Cedric handily takes the back portion of the quarter turns by way of superior back size, width and detail. Overall, Shawn’s smaller waist and shaved horse legs win him the quarter turns. 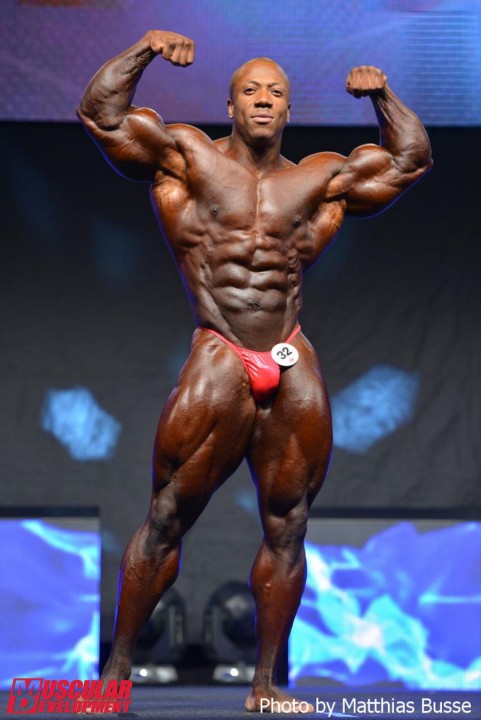 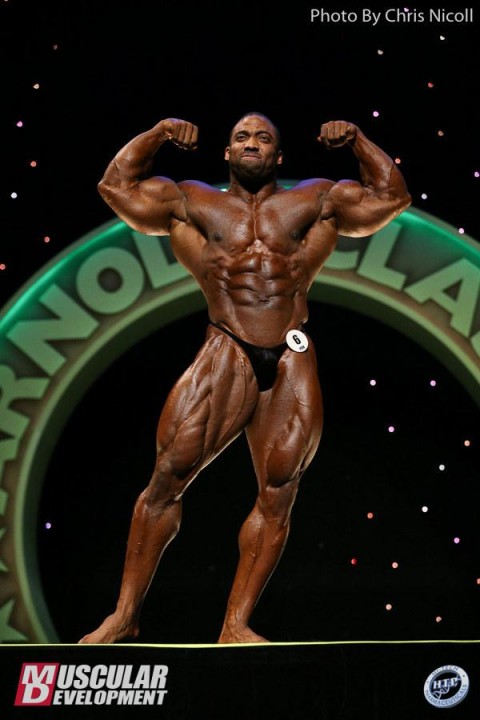 Nobody is going to beat Shawn Rhoden in the front double. While his legs appear to overpower his upper body just a bit, his waist is impossibly small, and appears to be about half the diameter of his quads. Cedric has more upper body mass, namely in the arms and lats, but that is far from enough to match the cartoonish proportions of Shawn Rhoden. Shawn wins the front double. 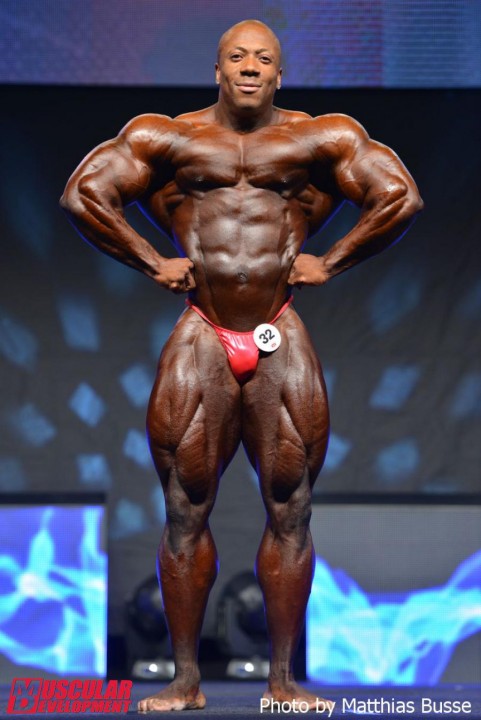 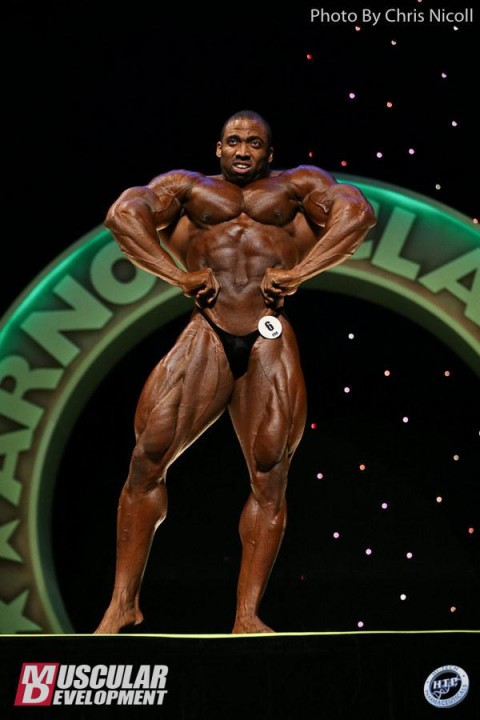 At first glance, Shawn’s extreme v-taper and monster legs seem like too much for Cedric to handle. However, as Cedric gets all the way into his shot, he simply overpowers Shawn and begins to make him look small. Cedric is like a giant sequoia out there in regards to how much room he seems to take up onstage. This shot is very close, but I have to give the edge to Cedric McMillan. 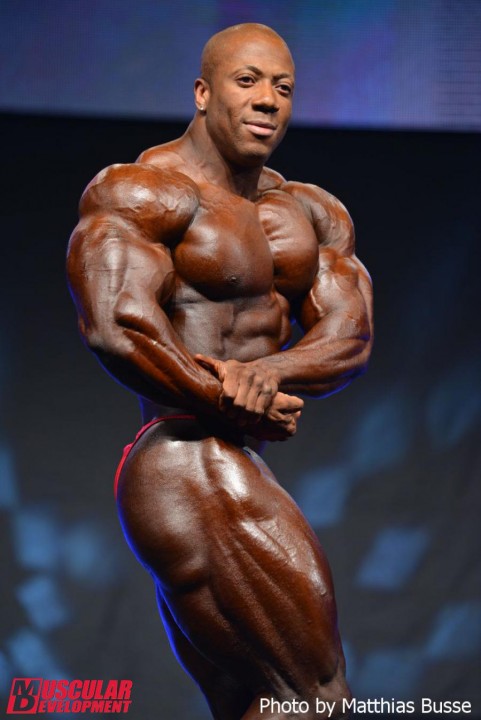 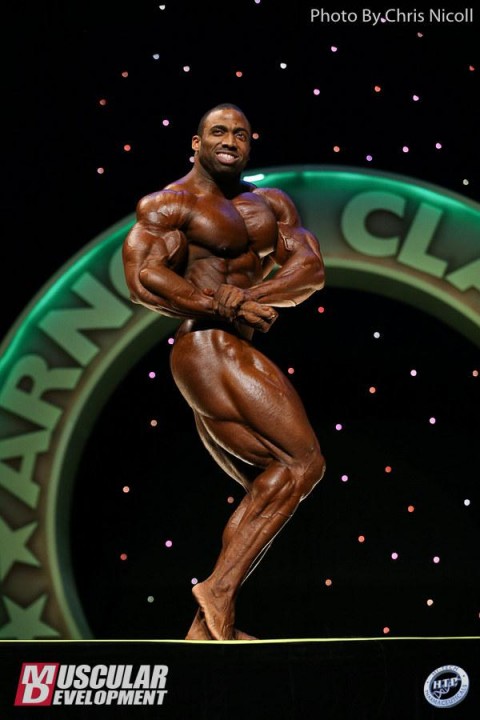 This shot will be an epic battle in and of itself at this year’s Olympia, especially if these two guys share a call out with Big Ramy and Dexter Jackson. All of these guys have unbelievable side chest poses. Dexter and Shawn especially, are the epitome of what a side chest should look like. Once again, Shawn’s leg from the side is absolutely out of this world, and looks to not belong on a human being, but rather a thoroughbred race horse. Cedric hits an Arnold-esk side chest pose, which is cool, but I personally feel that it hurts him in this particular shot. If he were to hit the post in a more modern fashion like Dexter and Shawn, he may have a better chance at taking these guys in this pose. In most cases, I feel that Cedric’s Arnold like posing is an advantage, but in this particular shot, this old school style makes his upper body look vastly superior to his legs. Shawn wins the side chest. 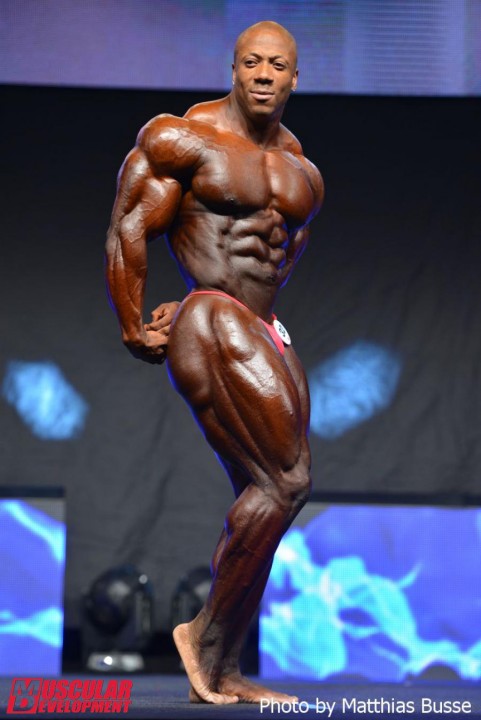 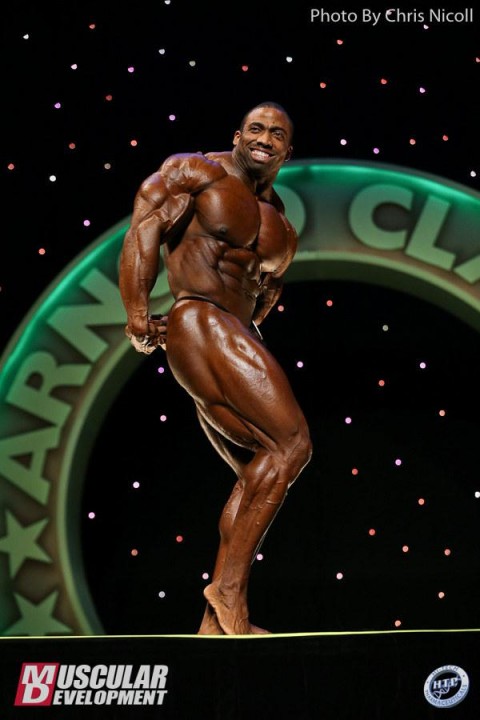 This shot is a matter of mass vs finesse. Shawn’s legs are once again better from the side than anyone else, but Cedric’s superior upper body mass and tricep development makes him a handful in this shot. One of Shawn’s greatest weapons is his tiny waist, and this shot is no exception. From the side, you wonder how such a muscular man can have such a tiny waist and hips. Shawn tends to relax his abdomen while transitioning in and out of this shot, but I will give him the benefit of the doubt and assume this problem will be remedied by the time the Olympia rolls around. I have to make this shot a tie. 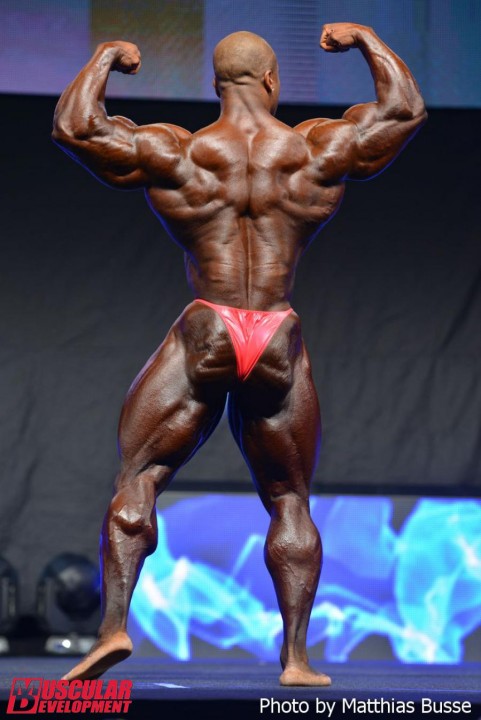 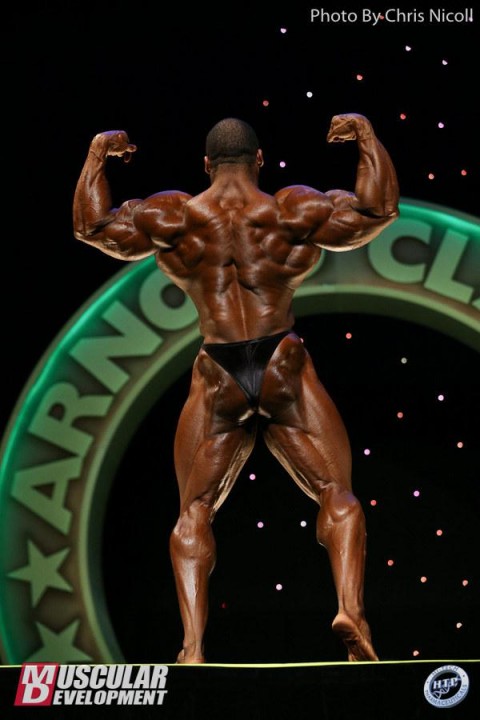 No man in this lineup can match Cedric McMillan in the back double from the waist up. Huge delts, wild v-taper, and unmatched detail. The lower half is a slightly different story. Cedric has a great glute/ham tie-in, but his legs could use more size from the rear, and he normally fails to achieve the granite like condition in his glutes and hams that guys like Phil, Dexter, and Shawn tend to show. Shawn Rhoden has the opposite problem, great size and detail from the waist down, but lacks size and detail from the waist up, at least in comparison to Cedric. In the back double, Shawn’s huge legs actually work against him, in that that tend to really overpower his upper body. For all of these reasons, Cedric wins the back double. 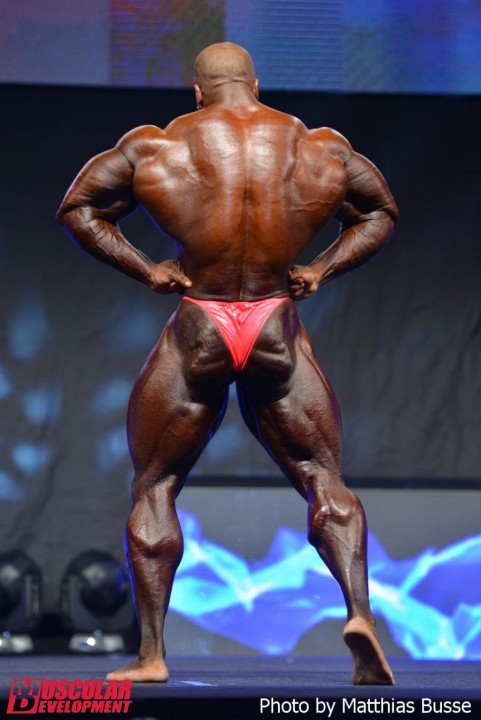 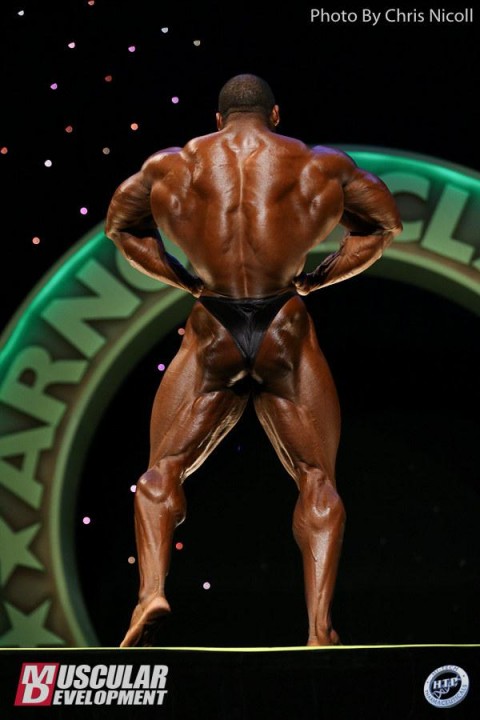 This shot, in regards to Cedric vs Shawn, is much the same story as the front lat spread. Shawn sports a smaller waist and superior legs, while Cedric once again looks like a massive tree standing up there, overwhelming Shawn with pure size and width. Cedric wins another shot. 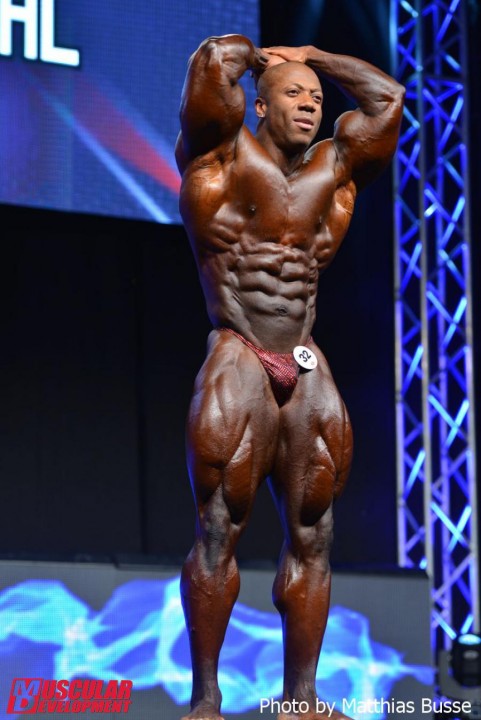 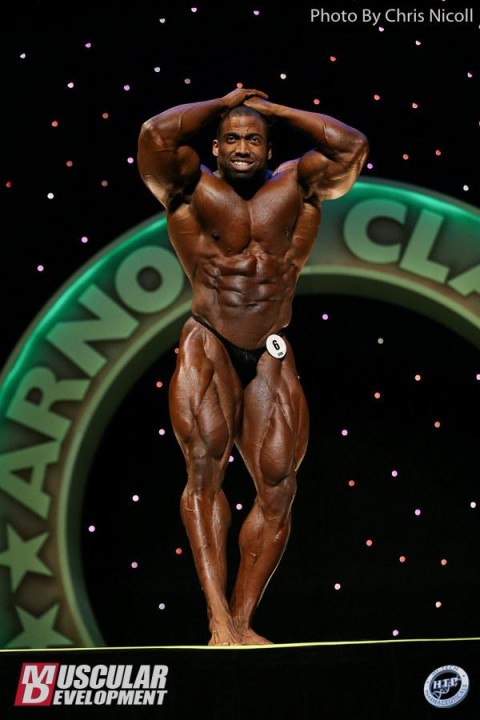 There are certain poses that Shawn Rhoden just simply runs away with. The first is the front double bicep, and the second is this pose, the abs and thigh. Shawn has the best abs in the lineup and the smallest waist, along with arguably the best legs as well, so he all but runs away with this one. In fact, Shawn has one of the greatest abs and thigh shots that the sport has ever seen, past or present. For what it is worth, regardless of who else makes it into the top call outs at the Mr. Olympia, Cedric will more than likely possess the second best abs and thigh pose. 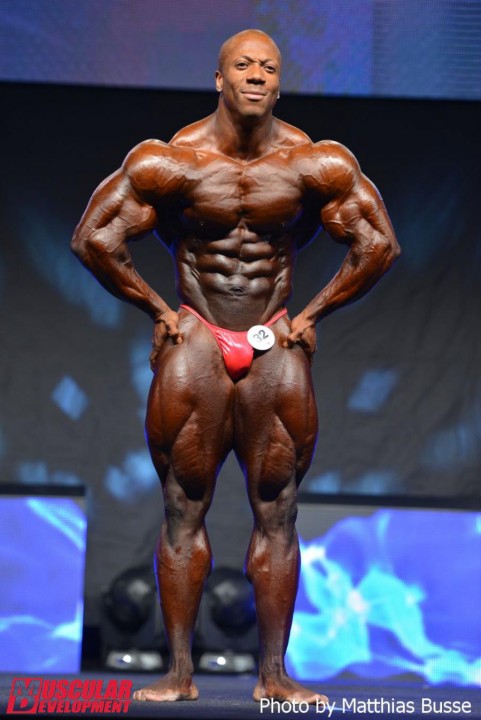 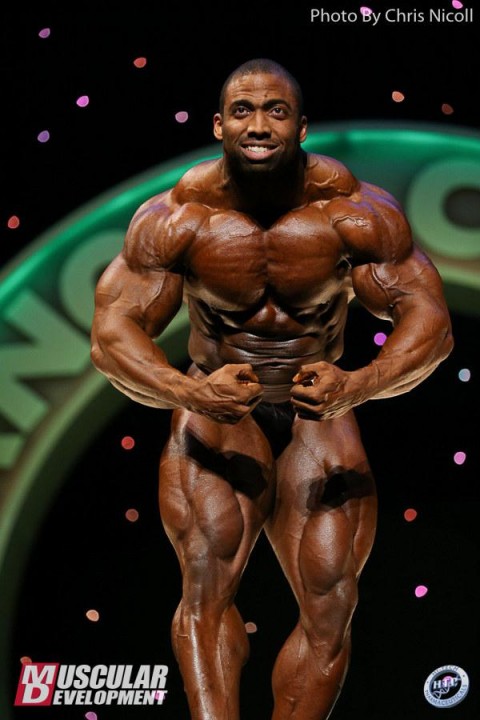 Shawn Rhoden has a phenomenal hands on hip most muscular, there is no doubt about that. However, much like Phil Heath tends to do, when Cedric bends over and hits his crab most muscular, it is simply lights out. If Shawn has the misfortune of hitting a crab most muscular right next to Cedric, it will appear that Shawn would fit right inside of Cedric. Cedric overpowers Shawn in the most muscular shot.

Based on this assessment, Cedric wins four out of the eight mandatories, while Shawn wins the quarter turns and three out of the eight mandatory poses. The question now becomes, do the quarter turns weigh more heavily than a single mandatory pose? I think the answer is a resounding, yes. It should also be noted that Shawn is a far more consistent bodybuilder than Cedric, without question. For these reasons, I have to give the slight, and I mean slight, edge to Shawn Rhoden. Shawn is yet to even come close to beating Phil, at least based on the scorecards, but many industry insiders did in fact have him besting Phil at the 2015 Olympia prejudging. If Shawn comes in with the same size he had in 2015, with slightly better condition, and his trademark wasp waist circa 2014, I personally feel that he has the potential to forcefully become Mr. Olympia.