Can Kai Greene Stay Focused Long Enough to Get a Sandow?

by Matt Weik The most prized trophy of them all… The Eugen Sandow (aka The Sandow Trophy). This coveted prize seems to keep slipping through 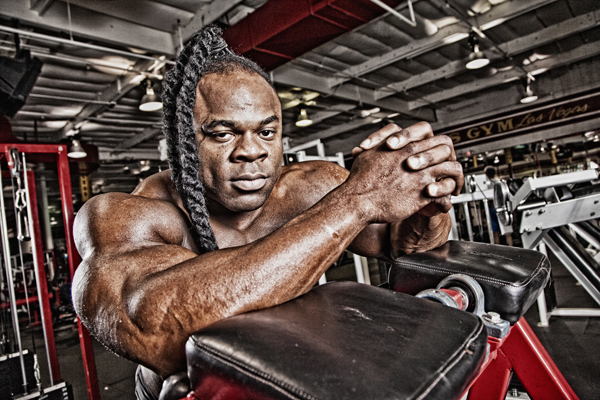 The most prized trophy of them all… The Eugen Sandow (aka The Sandow Trophy). This coveted prize seems to keep slipping through Kai Greene’s hands year after year. Even when Kai’s physique was on point, he was never awarded first place at any Mr. Olympia contest. As many times as Kai’s number got called, it was that many times that Phil Heath would knock him down a few pegs.

From the way things have been going, it’s pretty safe to say that Phil owns Kai. Let’s not get it twisted, there is no love lost between these two great competitors. We aren’t talking about a friendly rivalry like Jay and Ronnie or even Jay and Phil. Every time Phil and Kai are on stage together, they’re out for blood. In fact, in the 2014 Mr. Olympia, many people thought it was going to come to just that. During the interviews things got a little heated between these warriors. Then again on stage a flip of Kai’s hair just about had them exchanging blows when his hair hit Phil Heath while posing.

The question comes down to what is in store for Kai? 2015 Mr. Olympia was a total disaster when the fans found out Kai would not be competing. There are several theories as to what happened, but the bottom line is, he didn’t sign the contract. As it stands right now, Kai still hasn’t signed his 2016 Mr. Olympia contract. So what does all of this mean? Will the shadow of Phil Heath forever darken Kai’s chances of taking home a Sandow? Is Kai scared of Phil? Or is the competition on stage so intense these days that Kai doesn’t feel standing next to Phil, Big Ramy, Rhoden, McMillan, and all the other mass freaks is going to have him winning the O? Is that why he decided to compete in the Arnold’s again?

It goes without saying that Kai stepped on stage this year in Columbus for the Arnold Classic ready to compete. While his initial conditioning at prejudging left everyone thinking he would fade back in the lineup, he came out much dryer and sharper for the night show. Those few hours allowed Kai to make some changes and come back to steal a very controversial win from Cedric McMillan. Even Arnold himself made a comment when interviewed by Dan Solomon of Digital Muscle that spoke about how Kai always entertains with his posing and that is where he won. He also said that McMillan clearly won based off of physiques and that he had the tightest waist yet the win was given to Kai. These comments created a wildfire across the industry. Arnold didn’t just stop there. He also mentioned that the sport has a long way to go in order to get back to the vision of what bodybuilding really is. His belief in awarding the largest human being on stage doesn’t agree with his vision of symmetry and aesthetics from back in the day. Most people these days aren’t agreeing with Arnold as these mass freaks are drawing fans across the globe and filling seats.

Kai then made a clean sweep of the Arnold Australia and the Arnold Brazil—again edging out McMillan in Australia and simply showing up to collect his hardware and check in Brazil as there wasn’t anyone there to truly compete against him. With the momentum that Kai has going into the year, you’d be hard-pressed to think that Kai would not be on stage later this year in Vegas for the Superbowl of Bodybuilding and compete for the trophy that he has been working for his entire career. But many people aren’t holding their breath and think that Kai is done competing on the Olympia stage.

One would be foolish not to think about some things going on in Kai’s life that could possibly affect what the judges “see” on stage. It’s no secret that Kai’s past isn’t one that he is particularly proud of by any means. But to hold that against him is unfair. We’ve all done stupid things as a child and in our past, but to hold someone back from placings years after Kai made some poor decisions is not right. Rumors have made their way across the industry that the IFBB doesn’t believe Kai would be a good ambassador of the sport and that’s why even when he’s spot on, Phil always seems to secure the win. Even if Kai edges out Phil, does his past play into the judge’s heads and they come to realize the baggage that haunts Kai isn’t the look they want for the sport? If so, that’s truly unfortunate as Kai is one of the hardest working competitors out there—not to mention the ridiculous amount of fans he brings to the sport and who fill the seats of venues.

As it stands currently, the build-up of the 2016 Olympia is ominously looking like a repeat of 2015. Ink from the pen has yet to bleed onto the contract of the 2016 Mr. Olympia paperwork, leaving many questions about Kai’s psyche. What’s going on in his head? Does he have the energy and drive to go face Phil and make his mark in history as a Mr. Olympia winner and knock of the reigning king of the sport? Or will he continue to float around from Arnold to Arnold collecting his hardware and paycheck for the next few years? 2016 wasn’t a bad run for him with the Arnold Classics. But not putting a Sandow up on his mantel at the end of his career might be something Kai will regret.

All in all, I think it’s fair to say that many of us respect Kai as a competitor. He leaves it all in the gym in order to step up on stage the best Kai Greene that he can be and bring his best package. His posing routines are always entertaining and he brings a lot of excitement to the sport. An Olympia without “The Predator” is not something I would like to experience again and I’m sure I can speak for all his fans regarding that as well. For his sake and all of his fans, I hope he signs on the dotted line and puts his hat in the ring to give it a go and step up to the champ and give it all he’s got. He’s already created quite a legacy for himself, but missing that O victory will be a tough pill to swallow when he’s ready to hang up his posing trunks.