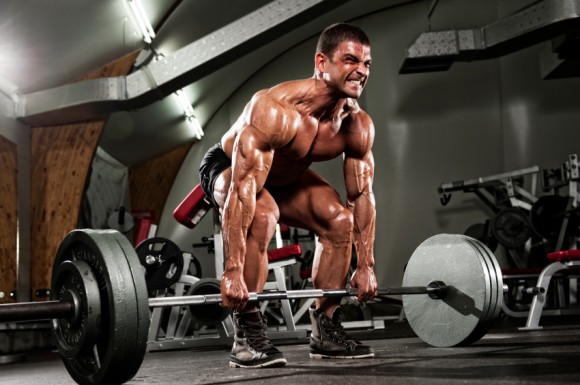 It seems like just yesterday that every aspiring bodybuilder was following the example of men like Dorian Yates and Ronnie Coleman, who were known for lifting ungodly amounts of weights on a near daily basis. But over the last 10 or so years bodybuilders seem to have moved away from that, focusing more on “the pump” rather than continually testing the limits of their strength. This is not surprising though, as bodybuilding training tends to move in phases, with each generation following the example of whoever is on top.

Back in the days of Arnold everyone trained like Arnold, with a typical training program involving 20-30 sets per bodypart, 2-3 times per week. Then when Dorian came around, setting new standards for size in the 90’s, we suddenly saw entire legions of bodybuilders using the low-set, low-frequency approach. During the reign of Ronnie we saw bodybuilders settle somewhere in the middle of those two extremes, and this continued with Jay. Despite the difference in training styles between these Mr. Olymias, they all had one thing in common—a reliance on heavy weights to build their muscle mass.

However, with our current Mr. Olympia appearing to rely more on machines and the pump than pushing big weights on the basics, we have seen an increasingly greater number of bodybuilders follow his lead. But it isn’t just Phil who is setting this example. A record number of professional bodybuilders appear to be training in similar fashion, inadvertently teaching our current generation of up-and-comers that heavy weights and more importantly, progressive resistance, is not crucial to maximizing muscular development.

The problem with adopting the training philosophies of the pros is two-fold. One, we can end up patterning ourselves after genetic anomalies—men who would have ended up with massive muscles no matter how they trained. While this is not always the case, we must be careful not to blindly proclaim a certain training philosophy as superior just because a certain bodybuilder appears to have gotten good results from it. Two, we must also take into consideration that the way a pro bodybuilder trains now may not be the way he trained when initially attempting to build up his muscle mass. With the average age of today’s top pros approaching 40 and the typical amateur not even getting his pro card until his mid-30’s, many of these men had already acquired the majority of their size before ever stepping foot on a pro stage.

Regardless of what training style a pro may have used to build his size, you can be sure that progressive resistance played a huge role, whether it was intentional or not. The point here is simple. If you want to get as big as possible, it is never going to happen unless you maximize your strength potential. Now, I am not talking about how much weight you can lift for a single, but about getting as strong as possible within the hypertrophy rep range (generally considered to be 6-12 for upper-body and 8-15 for lower-body, although it can fall outside of this range on either end). In fact, if I had to spit out a figure, I would hypothesize that roughly 80-90% of one’s total growth potential is directly dependent on the ability to make strength gains. If you find that hard to believe, consider the following.

We have all seen those guys who go to the gym consistently, yet fail to make any appreciable progress. In some cases they don’t make any progress at all, despite doing plenty of sets, getting a great pump, and leaving the gym with their muscles burning and tired. On the surface, such training might seem sufficient to stimulate growth, but if we look a bit closer, we find that almost all of these men share a single universal trait—a lack of strength gains. They’re the ones who use the same weights month after month, year after year and consequently, they always look exactly the same.

On the other hand, most of us have also seen those guys who are lazy in the gym. They don’t train hard, they rest 10 minutes inbetween sets, they barely get a pump, and half the time they don’t even break a sweat…yet they carry plenty of muscle mass. Just like the previously mentioned men who fail to make progress, this group of guys also tend to share a common trait, but a much different one—they can (and do) handle big weights on the basic exercises.

Take a minute and ask yourself the following questions. When is the last time you saw someone who could bench 450 X 10 with a small chest? When is the last time you saw someone squat 600 X 10 with small legs? Have you ever seen anyone who could deadlift 600 X 10 with a small back, or strict barbell curl 185 X 10 with small biceps? The answer is no. While different people will respond more or less positively to certain exercises, the point is clear. Big strength equals big muscles.

It is no coincidence that Dorian Yates, who was known for being one of the strongest bodybuilders in the world during his competitive prime, was also one of the largest. Ronnie Coleman, the biggest bodybuilder of all time (save for Big Ramy), will forever be remembered for lifting insane weights over at Metroflex. Nasser, Fux, Ruhl, and even Cutler (although known more for his high volume training, was still capable of benching 550 X 2, doing barbell inclines with 405 X 14, and squatting 675 for reps) all used massive weights in their training. Whether we are talking about Sergio, Arnold, Haney or guys from more recent years, all of them were known for being among the strongest bodybuilders of their era. Even pros who are not known for their strength are still considered extremely strong by regular gym standards. This is because one cannot build pro-level size without working their way up to using exceptional weights.

At this point there is always someone who asks “if gaining strength is the best way to add size, how come so many pros are now focusing on the pump?” The answer is simple. Most pros have already come very close to maxing out their strength potential. Remember, they spent years, and sometimes decades getting bigger by adding strength, but they eventually reached a point where gaining further strength just wasn’t possible. Or, it became an excruciatingly slow process, making progressive resistance much less effective and possibly even counterproductive (due to increased risk of injury).

Some bodybuilders reach this point before they even turn pro, and some shortly thereafter, but very, very few pros are able to continue gaining meaningful amounts of strength throughout their entire pro careers, and when they try they usually end up getting hurt. Dorian Yates is a great example. If we look at Dorian’s rise to the top, we see that he consistently added size every year up until about 1993 (his 2nd Olympia win), even though he continued focusing solely on progressive resistance his entire career.

What was it that caused Dorian to suddenly stop making such rapid progress? If you’ve been paying attention to this article, you’re probably thinking that it was related to a lack of strength gains…and you would be correct. Post-1993 Dorian gained only a small amount of strength and as a result, his size gains came to a grinding halt. Of course, Dorian never stopped trying to get stronger, but he had reached his limit and his body let him know it with multiple injuries, finally putting him out of the game in 1997 at age 36.

At that point in his career, Dorian probably would have been better off focusing on other means of growth stimulation. One such method is the muscle pump. While responsible for only a small percentage of one’s total growth potential, it may have allowed Dorian to continue making progress at a slow rate without incurring as many injuries as he did, and this is exactly what many of today’s pros are doing. They know that they aren’t going to get much stronger no matter what they do, so rather than risk injury, they are content to pursue growth through safer, although perhaps less rewarding mechanisms. In short, many pros have had to alter their training out of necessity. However, for those who are far from pro-size, going down this road is sure to accomplish only one thing—that you will never come anywhere close to achieving your maximum growth potential.

While there is a very direct relationship between size and strength, one cannot compare themselves to others in this regard, as there are numerous factors that can influence ones strength levels. Factors such as muscle attachments, structure, muscle fiber ratios, nervous system refinement, etc, all have a direct impact on one’s ability to generate force throughout a given range of motion. This is why there can be two people of similar size, yet one might be much stronger than the other. In fact, these variables can have such a profound influence on strength that it is even possible for a much smaller individual to out lift someone who is significantly larger.

Still, these factors are irrelevant when it comes to self-comparison. Assuming all variables remain the same, getting stronger within the hypertrophy rep range will always lead to increased growth, no matter who you are. While making progressive resistance the main focus of one’s training is guaranteed to take a toll on the joints and increase the risk of injury over time, it is an absolute necessity for any serious bodybuilder wishing to get as big as possible. Today’s bodybuilders need to take a page out of Dorian and Ronnie’s book and get back to lifting some heavy-ass weights.