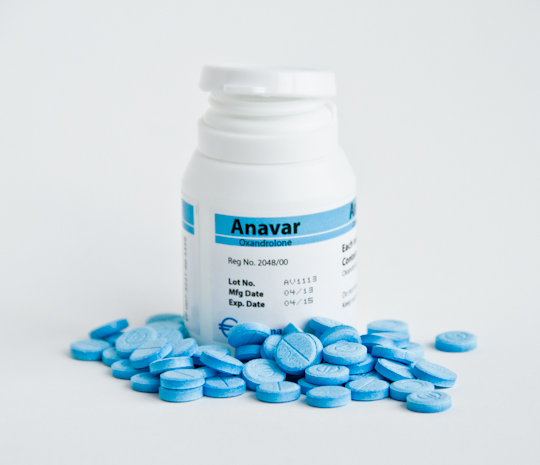 Each week, when I sit down and think about potential topics to write on, my selection is usually guided by a single motivation—passion. Without interest in the subject I am addressing, it becomes more of an exercise in boredom than an outlet for creative entertainment. I simply must enjoy what I am doing in order for it to feel worthwhile. Most of the time this leads me to new pasture, but every now and then I will re-visit an old favorite. In this case, the old favorite happens to be Anavar, or as it is universally known, oxandrolone.

To be honest, over the last few years I have barely thought about this stuff, outside of recommendations made to others for purposes of contest prep or re-comp. In my quest to familiarize myself with the full pharmacopoeia of bodybuilding drugs on a working level, I just wasn’t able to maintain a relationship with some of my personal favorites. This changed a few weeks ago when during a conversation with a friend, he suggested a return to my first love, which led to its immediate reintroduction in my mission to re-build lost mass and strength after a disabling back injury. It didn’t take long for my latent fondness to be rekindled and remind me of how much I missed this drug.

Its effects, while not wholly dissimilar to other compounds in its class, are unique in that they provide a number of benefits not usually found in a drug with such a desirable side effect profile. To be succinct, Anavar is a pleasure to use. Lipids notwithstanding, there just isn’t much to complain about here, which has made it a favorite of mine and many others for the last 50 years. With that said, if you are expecting to read a full profile on Anavar, you are better off searching elsewhere, as I am going to skip most of the technical info and instead, provide a general feel for its character, while focusing on unconventional methods of use.

Traditionally, Anavar has been used for contest prep or designated periods of fat loss. There’s certainly nothing wrong with this, as its extreme muscle hardening effects, as well as its ability to accelerate fat loss, makes it one of the very best drugs for this purpose. But Anavar is also a great choice for off-season use, as it provides several benefits complimentary to a growing phase. Unfortunately, Anavar is rarely used for this purpose among the majority of the bodybuilding community due to its tainted reputation as one of the “weaker” drugs in the AAS world. This belief has taken hold to such a degree that many now refer to it as a “women’s” steroid from a potency standpoint. Although far from the truth, this misconception developed for a couple of reasons, one of which stems way back to 1964 when Searle Laboratories first released the product. The original “Anavar” (brand name for oxandrolone), was originally manufactured in tiny 2.5 mg tablets, with dosing recommendations falling in the 5-15 mg/day range. In contrast, Anadrol was released during the same time period and was made in 50 mg tablets, with dosing recommendations as high as 200+ mg per day!

While bodybuilders have always pushed the limits when it comes to dosage, pharmaceutical guidelines were still influential in setting those limits, especially during the first few decades of use when bodybuilders knew relatively little about these drugs. So, if a pharmacy said to use a certain steroid, let’s say Anadrol, at 50 mg/day, most bodybuilders felt safe using 2 or even 3 times that dose (100-150 mg/day). But if another steroid’s daily dose was listed at only 5 mg per day, not too many people were willing to risk a 20-30 fold increase, which would have been necessary in order to administer Anavar at Anadrol-like doses. Not to mention, using the original Anavar at just 50 mg would have required the individual to swallow a full 20 tablets per day! Even to the bigger risk takers, this type of dosing often seemed excessive, so despite using doses significantly higher than Searle’s original recommendations, they were still less than optimal, cementing the idea that Anavar was one of the weaker steroids. This belief has remained in the minds of many to this day.

Another factor which helped establish the current perspective is the lack of impressive weight/size gains that accompany Anavar use. At least in this case, one can understand why this played a role. After all, if a certain drug has been proven to result in significantly less weight/size gains than its peers, the natural consensus will be that the drug isn’t very effective for building muscle—unless one knows what is going on from an internal standpoint.

You see, many of our best mass-building oral steroids (Anadrol, SD, and M1T) do a great job at interfering with the function of an enzyme known as 11-beta hydroxylase, which is partially responsible for regulating intramuscular water retention. When this enzyme is inhibited, the muscles begin to soak up water, and the greater this inhibition is, the greater the amount of water stored in the muscles. Because this water is intramuscular in nature and not deposited under the skin, it is indistinguishable from normal muscle tissue. Basically, this has a positive effect in our appearance by causing the muscles to look bigger, harder, and tighter. It is also responsible for producing the majority of the initial weight/size gains experienced with a drug like Anadrol, and also why the majority of it is lost within a week or two of discontinuation, as intramuscular water levels rapidly return to normal.

This effect, although present with Anavar, is far less exaggerated, which is why we don’t swell up anywhere near as quickly when using it, but neither do we deflate anywhere near as much when we go off. In fact, the majority of the weight/size we gain from Anavar is genuine muscle fiber. When looking at the situation from this perspective, we can see that the discrepancy in muscle gain between these two drugs is not nearly as great as it appears. Of course, I am not suggesting that Anavar is going to build as much muscle tissue as our top mass-building orals, but I am saying that the difference is far less extreme than what the scale/mirror may indicate, especially when comparing these drugs on a mg per mg basis. If you doubt this, I challenge you to run a 30 day cycle of Anavar only and a 30 day cycle of Anadrol only. After the 30 days is over, wait 10 days and then see how much weight you are left with from each drug. You may be surprised to see that the numbers aren’t that far apart.

Although Anavar is certainly capable of directly contributing to a cycle’s muscle building results, it is Anavar’s indirect effects which make it a great stacker with more traditional mass-builders, like testosterone, nandrolone, boldenone, etc. Perhaps its most valuable benefit lies in its ability to significantly increase strength. Anavar is a great strength builder; one of the best, actually, especially at higher dosages (we will address the issue of dosing momentarily). With strength gains being an absolutely critical element of any well designed mass-building routine (particularly in the beginner through early-advanced stages of development), it makes sense to utilize a drug which enables the body to push maximum weights. Adding some Anavar into a typical test and nandrolone cycle will provide a considerable boost in strength, leading to greater muscle stimulation during training and a more pronounced training effect.

We have all run cycles in which weight gains come on relatively quickly, but strength gains do not. In these cases, the vast majority of our mass gains are attributable to a transient increase in muscle volumization (I.M. water, increased glycogen, increased blood volume), setting the bodybuilder up for severe post-cycle gains loss. This is because true muscle fiber gains are almost always accompanied by an increase in strength, and vice versa. Because of Anavar’s potential to induce dramatic strength gains through enhanced neural efficiency (i.e. improved contractile ability), the muscles themselves receive greater stimulation during training sessions, resulting in a greater amount of genuine muscle fiber growth. Experience has shown that Anavar promotes additional gains in strength when added to almost any cycle, including all injectables and even the typical mass-building orals like Dianabol and Anadrol. Because of this, it is not unreasonable to conclude that Anavar increases strength through either a different mechanism(s) and/or through the same mechanism(s), but to a greater degree than the above-mentioned AAS. Of course, not everyone will respond to the same degree, due to the immense variability inherent in personal response, but it does seem to work well for most.

Although anyone considering using orals (methylated AAS) should be aware of their primary negative effects, I feel compelled to mention them, at least in brief. Anavar, like all methyls, is well known to have a negative effect on both the cardiovascular system (via deterioration of the lipid profile) and hepatic function (methyls are metabolized by the liver and therefore result in varying degrees of liver strain). Fortunately, Anavar is relatively mild in terms of liver toxicity, making this less of a concern compared to many other orals and a non-issue when administered in combination with the proper liver support supplements. On the other hand, its effects on the cardiovascular system are not quite so benign. While a temporary alteration of the lipid profile is not going to cause significant problems, remaining in that state for an extended period of time is a major contributing factor in the development of atherosclerosis, which is a major risk factor for heart attack. Therefore, the regular or long-term use of methyls is discouraged, particularly in the absence of preventative measures.

Aside from that, Anavar doesn’t have a whole lot of downsides, at least that we know of at this time. Compared to other orals, many of which can cause varying degrees of lethargy, appetite suppression, and general malaise, Anavar users generally feel good while on cycle. They also look good, due to its favorable cosmetic effects. This article wouldn’t be complete without at least touching on dosing. I know it has become somewhat common practice for many Anavar users to swallow up to 100 mg/day or even more. However, keep in mind that real, properly dosed Anavar produces dramatic effects at a dose of only 50 mg/day. No doubt, many of the individuals who think they are using 100 mg or more are actually using significantly less. 100 mg of real Anavar per day is far too much for the typical bodybuilder. In fact, unless one is looking to extract maximum strength gains from the drug, I see little reason to use more than 50-60 mg/day (which in itself can produce dramatic strength gains of near equal impressiveness), even in very advanced bodybuilders. The reasoning behind this belief is simple. For one, 50-60 mg/day is more than sufficient for providing maximum cosmetic effects (muscle hardness, dryness, etc). Two, while 100 mg may provide greater “growth” potential via the activation of additional androgen receptors, one could obtain superior growth benefits by filling those remaining receptors with other drugs.

For those of you who have been incorporating traditional mass-builders in your off-season for many years and have been thinking about trying something new, keep in mind that there is not just one correct way of doing things. Anavar is a viable alternative/addition with several unique benefits that can help boost strength-growth rate, while improving your overall appearance. It can be especially valuable for those who suffer gains-halting side effects from traditional orals, such as appetite suppression, by either acting as a substitute, or by allowing the individual to lower their dose of the offending oral (in the hopes of eliminating the undesirable side effect) while maintaining or even improving muscle gains.

Newer Post
Growth Hormone, Estrogen, and Skin Thickening
Older Post
Is the Expansion of Shows Killing the Passion for Bodybuilding?