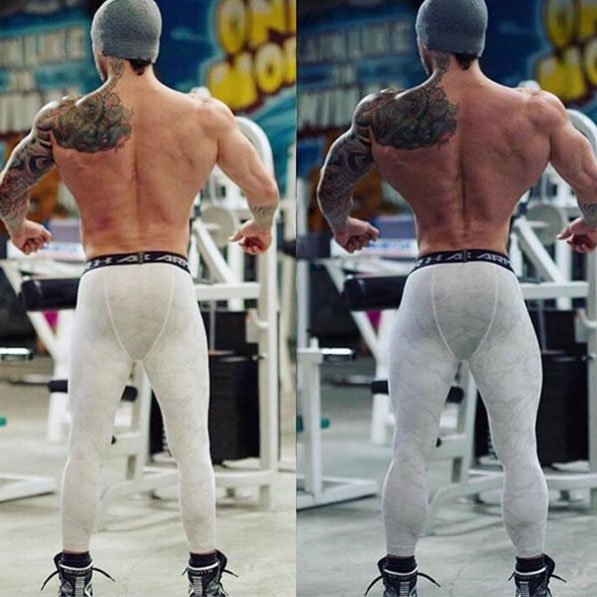 These days the biggest craze on social media are photographs—more specifically, selfies. While personally, I think it’s out of control and totally narcissistic, to each their own. You can’t log into Facebook, Twitter, Instagram, or whatever social media platform you’re using without seeing pictures plastered everywhere with individuals basically naked right in front of your eyes, leaving nothing to the imagination. You can generally catch a toilet in the background as for some reason there is an obsession with bathroom selfies (that’s actually quite disgusting). That seems to be the way the fitness industry is these days. However, women are probably some of the worst when it comes to selfies. No more is it, “how does my makeup look today?” Or, “do you like my dress?” Now it’s “check out my fake tits and ass in this dental floss bikini I’m wearing.” It’s totally degrading and upsetting to watch women have no self-worth anymore without these types of images.

It’s one thing to get plastic surgery done, but changing your physique simply by “editing” photos of yourself raises an eyebrow. What are you trying to prove? Plastic surgery is for the most part a permanent thing (unless you have complications and things need to be removed). To get a bigger bust women go under the knife to enhance their breasts. If they suffer from a pancake butt, they go under the knife to get implants to make them nice and round. Thin lips? No problem, we’ll shoot them up and have you looking like a duck in no time! But let’s not leave out the guys. No calves? Get implants. Holding onto some abdominal fat, go ahead and get lipo and while you’re there don’t forget to have them insert fake abs to make sure you’re rockin that six-pack year round. Do I agree with all of the surgeries out there? No. But at least what you see if what you get. If you see their picture online and meet them in person, they at least look the same. With Adobe physiques, what you see on social media more times than not is drastically different than what you would see in real life.

When I think of selfies in today’s era, I can’t help but think about the writing on car mirrors— “objects in mirror are closer than they appear”. When in actuality, if you were to create your own tagline for the fitness industry selfie posts, it should say something like this… “Nothing in mirror is as it appears”. Because it’s not. Enter the new-age world of digital editing. More specifically, the world of Adobe—where you can take a four-hundred-pound man and turn him into a Greek Adonis wearing a shield made from the hardest abdominals anyone has ever seen in the matter of minutes. Don’t believe me? Go to YouTube and search for “Photoshop body” and you will find tons of videos showing you how easy it is to manipulate images and turn duds into studs. Then comes the harsh reality. While using software like Adobe (Photoshop) may help a person look more appealing, the reality is, once you step outside the worldwide web, and close your front door to face the real world, you’re still a fat bastard.

Sure, you can doctor up your photos to create more defined abs, larger legs since you don’t train them, arms that make comic book characters look tiny, and a v-taper that makes your waist look thinner than your pencil neck. It will help you get recognized. Heck, you might even get some business out of it if you are an online trainer or if you get sponsored by a supplement company to help them sell products by using your image. That’s all great, more power to you if you want to be a douchebag. Meanwhile, there are people out there training their balls off to look like those photos of you on your Instagram account when in actuality, there’s no possible way that they can look like that unless they are on a heavy drug cocktail which most gym rats and weekend warriors wouldn’t dare touch.

More bad news for you selfie-stick addicts. Studies conducted recently are showing that individuals who constantly take and post selfies may suffer from mental disorders. On top of that, many of these individuals may be suffering from exercise dependence as well as the possibility of an eating disorder. I have published research on exercise dependence and some of the traits found in those taking selfies tie in with the disorder. The illusion given to the public of physiques that have been touched up and enhanced is bad for the general public who is striving to emulate their favorite social media fitness influencer. This too puts them at risk of exercise dependence and eating disorders in an effort to attain a similar physique to what they are used to seeing on their computer screens or phones.

The digital editing of photos is killing the industry and giving it a black eye—as if it needed any more help in that department. Who would believe anything that comes from the industry if people know it’s all an illusion? Yes, bodybuilding in general is an illusion to an extent due to the oil and tanning a competitor goes through to get under those bright lights and have it showcase his (or her) hard work in the gym and kitchen. That said, who would ever trust YOU if they found out you’re nothing more than an Adobe physique? A fake. A fraud. The world as you know it will come crashing down around you once you get exposed. It’s happened before, and it’s happening more frequently here of late. Don’t think you’ll get away with it. It might not happen today, but eventually you will be exposed and called out. So why risk your career and reputation over some edited photos? It’s not worth it. Put down the Adobe and pick up the weights and clean food. Do it the right way. Respect the journey and live the lifestyle. It will make it that much more rewarding when you keep seeing results in the mirror, without having to use all the digital editing. Quit lying to yourself and your followers. Run your business (the selling of your physique for financial gain) with integrity because once your name is in the mud, it’s hard to clean it off.