Who Will Comprise Of Bodybuilding’s New Era?

by Geoff Roberts Between 2001 and 2002, the often praised and discussed “90’s era” came to an end with the storming of a young Jay Cutler into 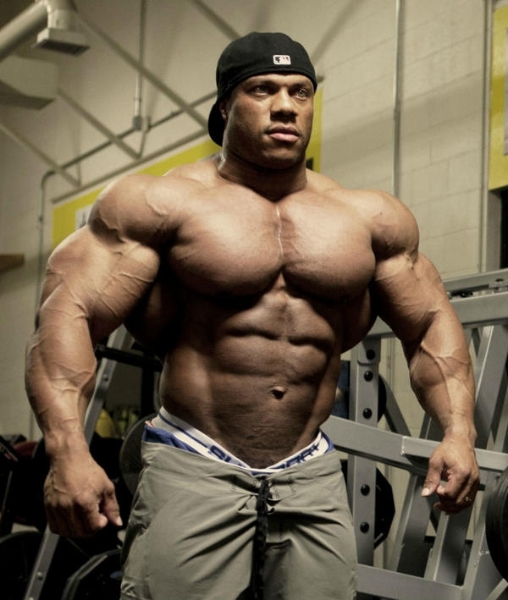 Between 2001 and 2002, the often praised and discussed “90’s era” came to an end with the storming of a young Jay Cutler into the Mr. Olympia in 2001 and Kevin Levrone taking a final stab at the big dance in 2002. This was, for all intents and purposes, the end of the great Flex-Nasser-Chris-Shawn-Paul-Kevin era. Soon after, our industry was introduced to the Victor-Jay-Dennis-Kai-Dexter-Branch-Phil era. Phil Heath handily winning his third Mr. Olympia title in 2013 once again over Kai Greene, relegating the great Jay Cutler to 6th place, Branch to 9th place, and Victor out of the top 10, gave the distinct feeling of father time ushering in a new era in bodybuilding.

While Branch and Victor have improved slightly on these two lackluster placings since, it is clear to see that the Olympia top five has officially passed both of these legendary athletes by. Dennis has failed to significantly improve in the last few years and is not getting any younger. Shawn Rhoden has shown vast improvements over the last few years, but his recent placings do not reflect it, and at over 40 years old now, more slips in his placings are more than likely right around the corner. Dexter, well… Dexter is clearly of a different species than the rest of us. With this current era slowly but surely coming to an end, there are several glaring questions we must ask as bodybuilding fans. What list of names will the next era be comprised of? Who will step up and become the “new Jay Cutler”, challenging the champ for years to come? Who will be the new “king of the ten-thousand dollar shows”? Who will become the new “people’s champ”? Attempting to answer these questions, if nothing else, will serve to excite bodybuilding fans, our younger fans most notably. 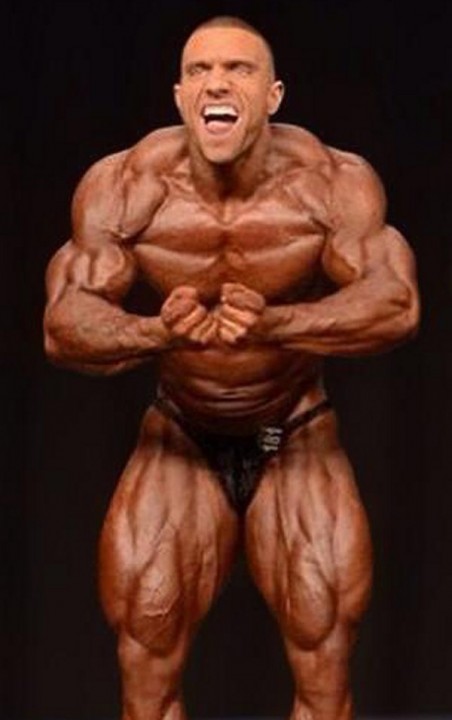 Dominick, at 22 years old, is a throwback to the golden era when guys were turning pro in their early twenties. Cardone has two very obvious strengths. The first is his lower body. Everything is there, quads, hams, glutes, calves, all highly developed and detailed. The second thing is his non existent waistline. Dominick sports one of the greatest quad to waist ratios the sport has seen in some time. Rest assured, successfully finding pants that fit must be no small feat for this 22 year old phenom. Huge legs are the foundation (literally) of any top bodybuilding physique, and with 15 years to go before he hits his peak, Cardone already has this foundation covered. Although Dominick is bottom heavy right now, it is unlikely that his work ethic and vast genetic gifts will not fix this discrepancy in short order. With pro-caliber wheels and possibly the smallest waist in the entire men’s open class today, Dominick’s potential seems virtually limitless. 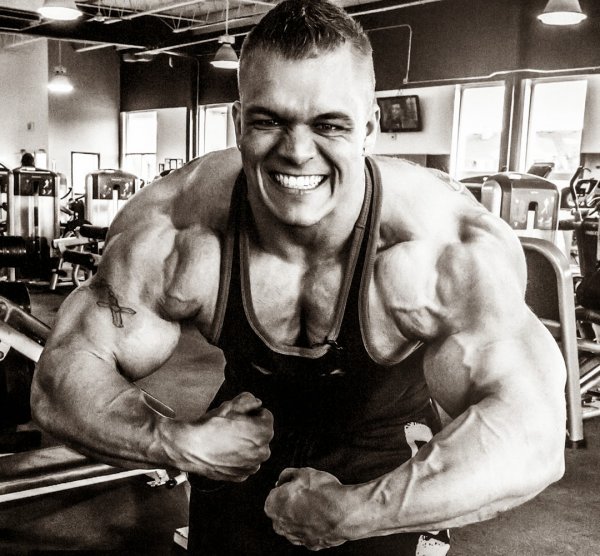 I was tempted to refer to our number nine new era bodybuilder as Dallas Brewer, due to the potent similarities between himself and former bodybuilding phenom Trey Brewer. While the similarities are there, Dallas has already surpassed the career of Trey Brewer by leaps and bounds. These similarities also happen to be the reasons Dallas will be a big factor in our new generation. Pro caliber muscle at an impossibly young age, a huge supplement contract, and insurmountable expectations from our industry due to his age. Everyone’s eyes will be peeled waiting to see what this young man will and will not accomplish over the next couple decades. 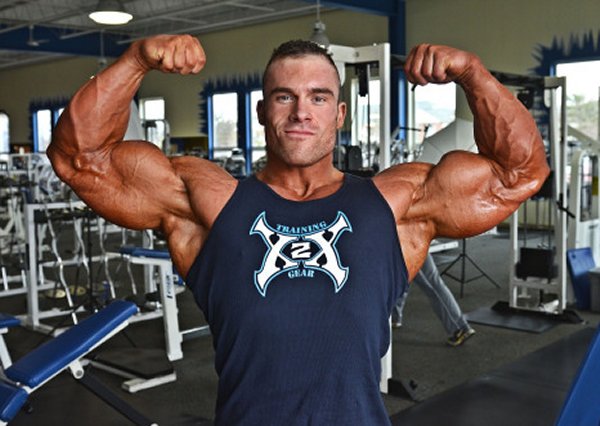 Roman is a very special bodybuilder. Roman technically earned his pro card at 25 years old, but had it “stripped” due to some unforeseen circumstances which were out of Roman’s hands, easily earning it about one year later. Roman sports a tiny waist, extremely flat midsection, deep separation, and seems to be missing the largest organ of the body, skin, altogether. Outside of Roman’s unbelievable muscle maturity, shape, and graininess at such a young age, he is also made formidable by the extent to which he is a true professional. People who are close with Roman will tell you that he never misses a workout, always trains hard, and seems to have an extreme phobia of junk food. Not a bad combo for an up and coming bodybuilder huh? 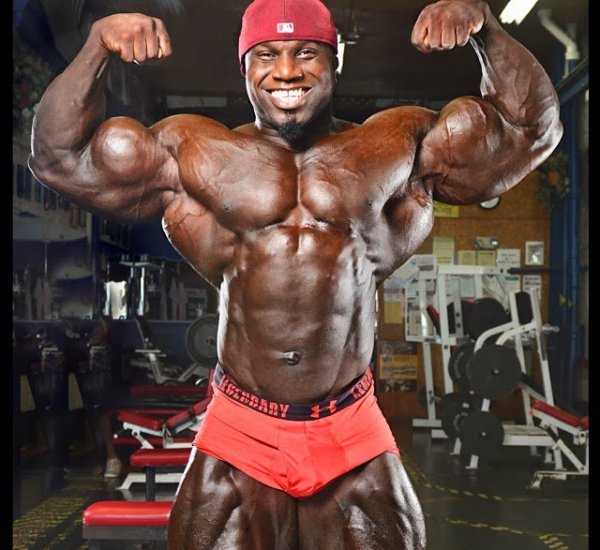 If you know anything at all about Akim and you are not a fan, you have issues. Akim is polite, humble, respectful to everyone, and possesses superhuman strength. This is a bodybuilder who squats over 700 pounds and dead lifts 800 pounds on a weekly basis and is not afraid to show the world on social media, which we all love of course. That aside, he is young and filled to the brim with potential. Akim has a wasp waist when in shape, huge freaky arms, sweeping quads, one of the best chests in the biz, and has shown an ability to put on lean muscle tissue at an alarming rate. Akim garners memories of watching the great Ronnie Coleman add slabs of muscle to his frame via bone crushingly heavy squats and dead lifts. As long as Akim continues to improve in this fashion, can nail down his condition and improves his presentation, he will be a force at the Olympia level for years to come. 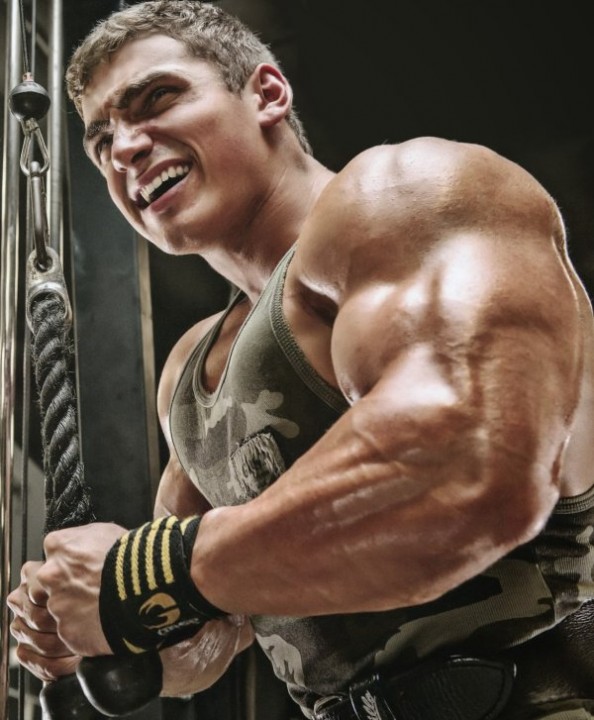 Similar to Dominick Cardone, Cody turned pro at the impossibly young age of 20. Cody’s strengths are very unique for a guy who is only 20 years old. They include unbelievable muscle maturity, separation, and overall muscle quality. Simply put, Cody was born to be a bodybuilder. Cody has decided to jump into the Arnold classic for his pro debut, a ballsy move if there has ever been one. Most would agree that for Cody to make a splash at a show like the Arnold Classic, he will need about 20 more pounds of muscle evenly distributed over his frame. Unfortunately, this level of muscle accumulation is not a realistic expectation in the amount of time he has had since winning the overall at the NPC USA championship a mere six months ago. When Cody does manage to put on these 20 pounds of muscle, assuming the 20 pounds does not have a negative impact on his shape, and his world class flow stays intact, no bodybuilder will be safe. 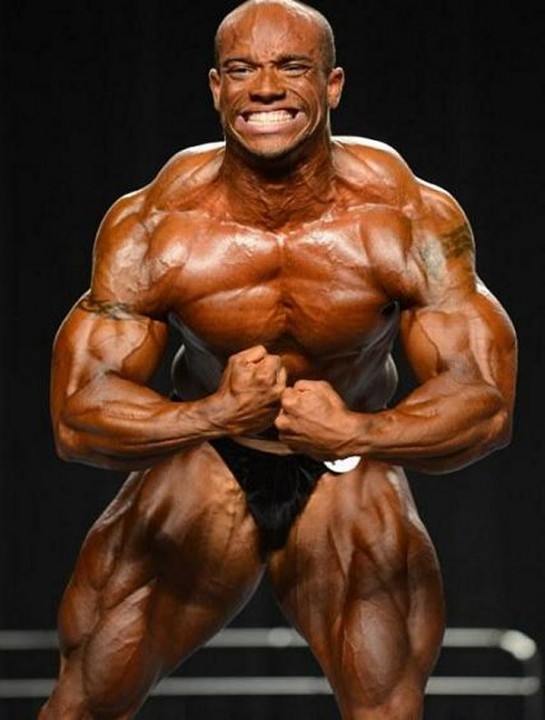 It is possible that Sergio Oliva Jr. may never win a big show, or a show at all for that matter. Nonetheless, he will be a topic of discussion well into the future for the obvious fact that he is the son of The Myth, Sergio Oliva. Outside of Arnold Schwarzenegger himself, it is hard to imagine a more intriguing son-of-a-former-Mr. Olympia-competing-today story than this Oliva story. In discussions of who had the greatest genetics in bodybuilding history, Sergio senior is always near the top of the list, and if he isn’t, the person suggesting as much obviously does not have a good understanding of The Myth. It is hard to imagine any athlete in any sport being more ahead of his time than Sergio senior. The symbolic icing on the cake of this story is the fact that Sergio Jr. was given the same name as his father, preventing us from ever forgetting about the mutant blood that is flowing through his veins. 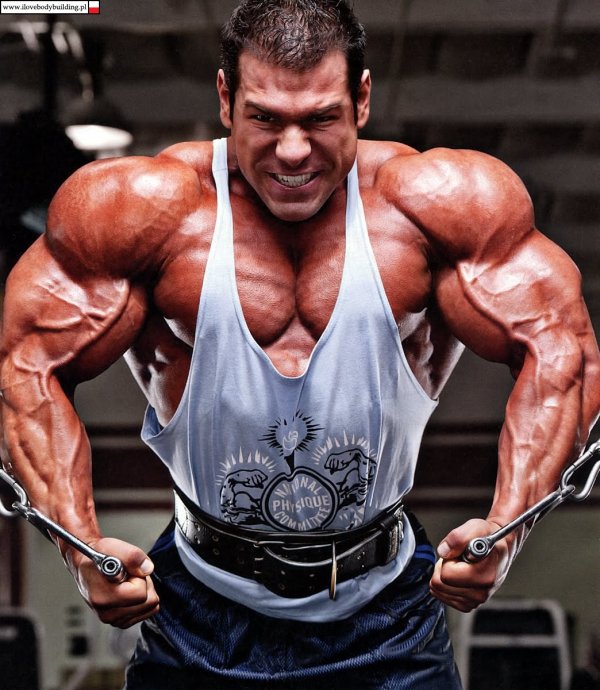 Steve is still only 30 years old, already has two professional wins, has placed third at the New York pro, and top ten at the Mr. Olympia. Right from the starting blocks this guy was pegged as a future Mr. Olympia by highly respected personalities in our industry with his enormously wide shoulders and massive overall structure. Kuclo has all the makings of a future Mr Olympia champion, including the all American golden boy look. Steve’s placings have slipped a bit as of late, but his potential is as glaring as ever. With a little more mass to fill out his massive frame, Steve would already be a top six Olympia competitor at only 30 years old. Steve could be the guy to knock out the champ if he finally fulfills his vast potential. 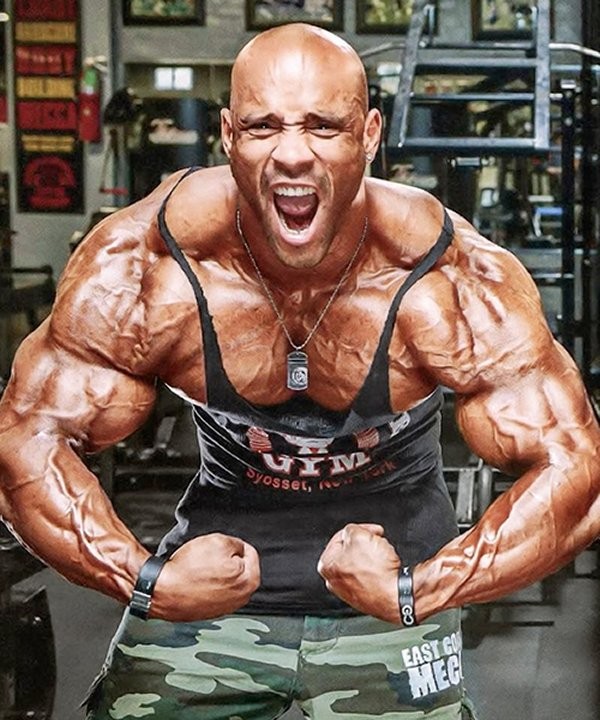 Juan is one of the older guys on the list, but has less “mileage” on his body than his age would imply, due to a relatively short competitive career. This guy has no problem creating buzz around our industry with his consistent ten pound jumps in body weight every year, and his 20,000 calorie cheat days every Sunday during his preps. Juan is in an anomaly in that he performs heavy squats and dead lifts weekly and eats more food than any other IFBB pro, while still maintaining an extremely small, flat, midsection. This all points to Juan having truly remarkable genetics. If he can bring his quads up to match his upper body, look for Juan to be battling for top spots at the Olympia, while continuing to drive us mortals crazy with his pre-contest ice cream and cookie photos. 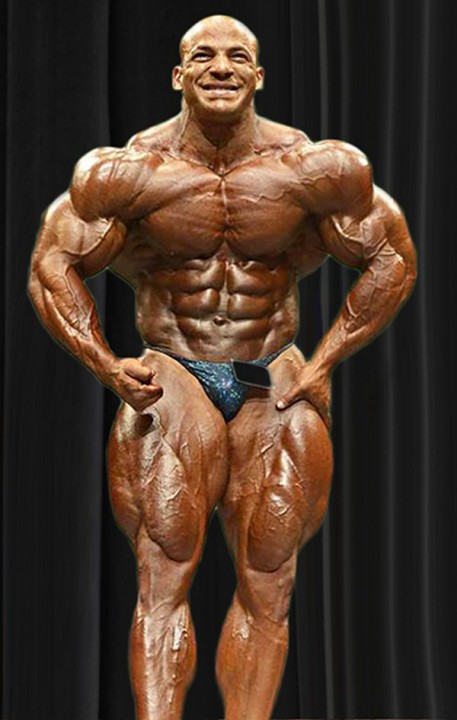 I have referred to Ramy in past articles as the Paul Dillet of our day, and for good reason. It is clear to see with both these men that there is something going on behind the scenes or in the genes that is not present in over ninety nine percent of other competitors. They have a combination of size and shape that boggles the minds of even seasoned professionals, without working any harder than anyone else (and at times are actually rumored to put in far less work than most other pros). Genetics, work ethic, or secret drugs aside, Ramy is only 31 years old, competes at 5’10”, weighing a staggering 305 pounds, all while maintaining a relatively small waist. These factors alone make him a threat for the Olympia crown, but only if he can dial in his condition all the way, something he has been seeming to struggle with throughout his short career. 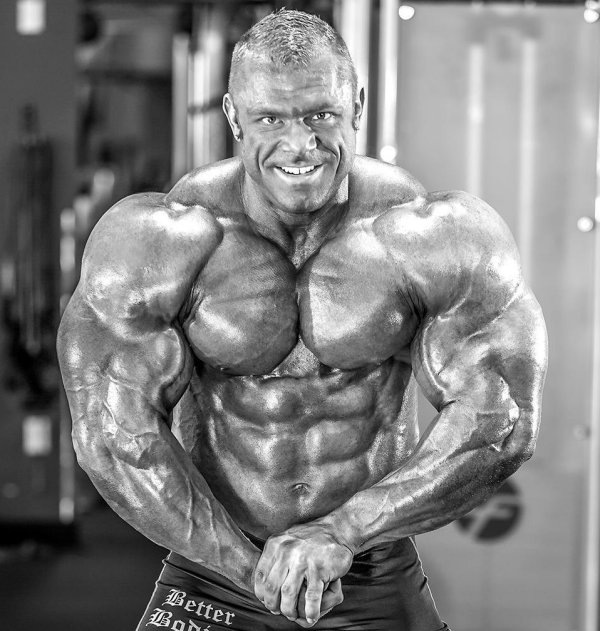 If anyone is going to blast onto the Olympia stage and start this new era off with a brand new rivalry as Jay did in 2001, it is Justin Compton. Justin is of of the the younger men on this list, while at the same time possessing arguably the best physique. After his convincing win over Jon Delarosa in Orlando, the majority of industry experts were saying that he will easily be top ten at the Olympia, while many predict he could be top six or higher! This was at a mere 25 years old! Justin went on to skip the Olympia and place 3rd at an extremely competitive Arnold classic at only 26 years old. A show that he may have won if not for some unknown complications which caused his midsection to be slightly distended and washed out. Some of the same rumors circulate about Justin that are directed towards Paul Dillet and Big Ramy, and for good reason. These rumors referring to some “secret” he must have in order to account for the level of development he has acquired at such a young age. Secrets or no secrets, this kid is the real deal, and the guys at the top would be foolhardy to not keep an eye on their rear view, as Justin Compton is coming up fast.