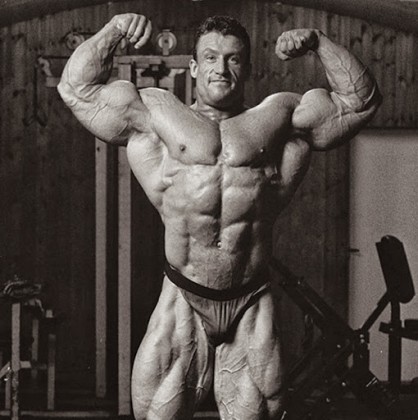 I remember a cold and chilly season in Gothenburg Sweden back in the 90s. The weather type is similar to Birmingham UK where the classical training documentary was filmed. A movie that showed was real brutal workouts and hardcore gym’s was all about. I am talking about Blood & Guts and the globally famous “Temple Gym”. I can’t recall who lent me the video but I do know Is was the original version – not copied – the cover was a paperback a little busted on the sides – a classic VHS cassette with a bit of classic flickering going on in the picture…

When I pressed play the intro started with:

“Hi I’m Dorian Yates 4 x Mr. Olympia and this is the Blood & Guts the video I’m going to take you into my gym and show you how I trained to be world’s number on I hope you’re ready because going to be rough, like I said it’s Blood and Guts”

As many who has seen the movie know it showed a brutal and intense and workout with someone who could control a hell of a lot of weight almost with remote machine accuracy.
Yates truly showed his audience what true hardcore and a disciplined lifestyle was all about and there was no match to his way of reaching the Sandow Trophy.

The movie brought me more than just an example of a training system. I did not directly apply Dorian’s HIIT- system into my training but I used the intensity at times and the negative phases in the movement of the reps during periods of my training. But the whole concept of his training philosophy is something that for me meant reaching dreams and outside or inside the gym area.

I followed Yates whole career and read his interviews and articles. I do believe Yates partially through this taught me about what real hard work ethics looked like and what it can lead to in to the end. Never quitting – just keep on coming. Disciplines to apply at the university, at work, building a company or in any other place you want to pursue a goals and dreams.

No one should either forget what here his hard training philosophy brought him. Yates stood on the hill and defended his top spot when the competitions was the hardest in the history of bodybuilding. He took care or handled everyone from Mike Francois, Kevin Leverone, Shawn Ray, Flex Wheeler, Chris Cormier and even Coleman in his earlier Olympia entries.

Then when it comes to other Mr. Olympia’s – sure did work their but off – but many of them on safe terms. Yates on the other hand -he went far beyond that. He cut through the surface of earth – went into hell, fire and back again – to one day in silence walk up on the Olympia stage to show them all that the new King arrived.

As a sideline to the When it comes to contemporary bodybuilders and counterparts to Yates, Branch Warren is a name that comes to mind for some. All credential to Warren’s contest performances and his powerful muscularity. Aside to this when it comes to his version so called hard core workouts and training videos it’s freaking joke compared to Blood & Guts “ everyone can do half ass reps with heavy weights and throw around weights like a manic mental patient on too much generic substances. And everyone can scream “light weight “motherfuck*r” 10 or 20 times during their so called hardcore training session.

But I’ll tell you this – anyone can’t train like Yates or Coleman – it’s just as just as simple as that. Just as little as anyone can fight like Muhammed Ali or in jazz – play trumpet like Miles Davis it’s in their DNA, drive and mindset. Regardless of your DNA no one have to train like an idiot – what you should do is to get inspired and do your own training version of it and strive for your own goal whether it’s inside bodybuilding or in a different field of life.

Final words for the bodybuilders or non. Dorian Yates have a story to tell for anyone out there. Additionally I actually believe that if several of the Mr. Olympia’s or bodybuilding legends in general could do more work as motivational speakers at seminaries for organizations or universities for example, and even in a smaller scales write autobiographies about their lives and different roads to success. I’m quite sure that they would get a very positive response if they can market the idea in a good way.

Stories about what made them reach their dreams and finally stand there on the stage with 15-20 of the greatest bodybuilders in the world. And succeed to stand out and finally achieve the Sandow and become the King among Kings, well that is an inspiration for any human out there.