The Important Female Impact on the Fitness Industry! 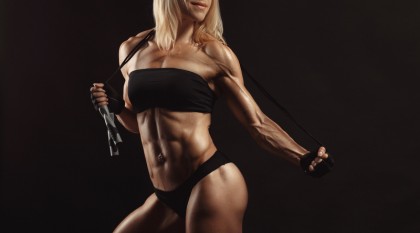 Since the beginning of bodybuilding history, men in general have been on the front lines of the bodybuilding and fitness movement. If we look back in time, the culture of bodybuilding as we know it today basically started with Germany’s Eugene Sandow in the end of 1800’s where his muscular physique was seen in various commercials and other short films. In addition, bodybuilding or fitness culture at the time solely correlated with masculinity and did so for many years to follow.

However, back in the 30’s, and a few decades after, women were beginning to be seen exercising along with men at places like Muscle Beach, California. But they were never on the front lines of the fitness culture like men were. Furthermore, in the 70’s and in the beginning of the 80’s, something started to really change. More and more females began to be seen more often in gym facilities. Women were also starting to be seen around the free weights and other basic gym equipment and began bodybuilding in a larger numbers. People began to understand that being fit and athletic could involve both sexes.

One of the first female bodybuilders who went mainstream and really received attention beyond the competitive stage was Rachel McLish. McLish won the Ms. Olympia title back in 1981. After that she did commercials, movies, and other TV performances. Corey Everson took over as Ms. Olympia and became the more muscular female role model. Also the dominant Lenda Murray is a competitor who has had a huge impact on the industry. The 80’s and 90’s were huge decades for the evolving woman of fitness and bodybuilding. However, somewhere in the 90’s this evolution became too extreme for many, in other words women were losing the feminine athleticism of muscular development.

Due to the development of the more extreme look, the IFBB created new divisions like the Figure class and Women’s Physique to counteract this evolution and bring back the old ideals of female bodybuilding. Ideals of femininity and athleticism and muscularity combined. These new classes have succeeded to inspire and attract more people outside of the fitness industry to become fans and competitors themselves.

So, what has female bodybuilding in general, and the new divisions specifically meant for the IFBB and NPC plus the global fitness society?

Here’s the thing. I believe it’s important to emphasize the female impact since it’s an important part of what’s holding up the industry. There are so many females who have started to train and completely changed their lifestyles because of women like Lenda Murray or contemporary athletes like Dana Linn Bailey, as examples.

The industry is still quite male-oriented, but let’s not forget the second wheel which holds this fitness movement together – the female athletes. Mr. Olympias such as Arnold and other men of the bodybuilding industry in general are on the frontlines of the fitness industry, and so we often forget that women have had a huge influence on training lifestyles. In other words, women as well as men are a huge factor and a force to be reckoned with, both from an inspirational perspective, but also from a business standpoint. However, this has gradually changed; with former Women’s Physique Olympia champion Dana Linn Bailey for example. Bailey has successfully combined business and competition.

There is a true evolution going on which is a plus for the IFBB and something I believe we should focus on to support and develop the industry in a positive direction – encourage more females to walk the same fitness path.

I also believe that male athletes can learn from the woman in the industry regarding discipline and staying on the straight and narrow course to reach goals whether it’s competing or in other fields of life. Because when it comes to training routines, being consistent and not bitching so much about diets, well, many of us have a lot to learn from women.

How often do we see woman out of shape on the competitive stages? In fact, we see men appear in poor condition on stage twice as often as women, if not more often. So, by this principle I know that men have a lot to learn from women competitors when it comes to training and diet disciplines. Train intensely and have a rare creative approach in the gym… implement new ways of training. This is inspiring both for newcomers and those of us who have been training for a long time actually.

This is also a change that we never really acknowledge, even if it is very important because of its effect on the global fitness industry.

In closing, let’s not forget the second wheel of the fitness and bodybuilding industry – women! They are the wheel that keeps this industry and culture rolling through history and into the future.