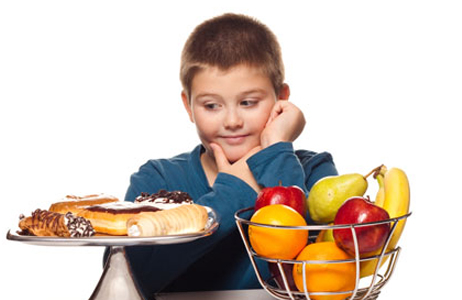 Few things in society are as unfortunate to witness as a young child who is obese. Mainly because the overwhelmingly majority of people who are drastically overweight as children will bear the burden of excessive body fat along with all the negativity that accompanies it for the rest of their lives. There are many theories as to why childhood obesity is running rampant in our society as of late. Most of these theories are in the age old “We used to play outside after school, not watch TV and play video games!” category. This all-too-common theory that kids are simply less active, thus making them obese, is absolute nonsense. The same can be said for the disturbing amount of adult obesity in our society as well.

First and foremost, the reduction in activity level in children does in fact play a certain role in childhood obesity. However, this role is indirect and exemplifies the realization that diet is the true culprit of childhood obesity. Let me explain. If a child is “outside playing” they are more than likely not going to be eating at the same time, whereas if they are inside watching TV, they are much more likely to be eating. That said, the act of sitting inside is not the issue, the issue is the fact that children are allowed to plow through a box of Oreos while they sit and watch Pokemon. Boy, how can we possibly fix this issue? A true mystery…(That should have been read in a sarcastic manner).

This lack of activity theory implies that the metabolic difference between lightly playing outside and playing X Box inside, in a 40 pound person who is growing rapidly is enough to cause kids to become obese. Which is kind of like claiming that a professional bodybuilder who gets super fat after a show did so by only reducing his training and cardio, same drugs, same diet. In other words, it is downright silly. What drives this point home even further are the millions of unbelievably active kids who are also fat. Everyone knows at least one kid between the ages of 5 and 10 who is simultaneously extremely active and excessively fat. I was one of those kids! If lack of physical activity is to blame at all, why are there millions of obese children who continue to be as active or more so than any kid in the past?

In case it has not already become clear, diet is the reason that our children are getting type two diabetes before they hit puberty. If you spend any amount of time in a public setting, you have the privilege of watching the idiocy of our society cause prepubescent type two diabetes, a state of health that is utterly ridiculous and should not even exist. Who hasn’t witnessed a kid who is a mere three feet tall downing a 20oz soda containing 50 to 90 grams of pure sugar? Not only is it sugar, but it is arguably the worst form of sugar for the body known to man, high fructose corn syrup. From a body weight standpoint, a young child drinking a full sized soda is equivalent to a 200 pound man such as myself drinking 250 grams of pure sugar while I walk around the mall. Good hustle parents of America!

Food industry lobbyists, media brainwashing, and the all important factor of human herd-following, have successfully made foods that are literally poison not only acceptable to eat all the time, but acceptable to feed to our children! Foods like kids cereal, juice, pretzels, wonder bread, gummy bears, suckers and soda have a 100% negative affect on a human beings health. No positive health effects of any kind are garnered from these foods, yet 90% of parents feed them to their children on a daily basis without hesitation. Think about that.

One other factor must be addressed. The endlessly irritating “genetic” factor. This goes for adults and children, but for now the focus will be children. Feeding your child foods that are 100% harmful and 0% helpful and justifying it by saying things like “He’s so skinny, he needs this.” is similar to saying “His lungs work so well, he needs this cigarette.” Do you think that if a kid is naturally lean, junk food magically stops being harmful to their teeth, organs, brain development, muscle mass, etc? If so, you may want to lay off the Harry Potter watching with your child and take those EL Fudge cookies and high sugar skim milk away from them while you’re at it.

On the flip side, your kid is not “just big”, big boned, or husky. You know how I know that? The same way I know that Santa did not visit your house this year. None of those things exist in real life. He or she is fat. Period and end of story. Why is he or she fat? Is it genetics, or could it be from you allowing them to gorge on the one set of “nutrients” that are not only 100% non essential to the human body, but also lethal at high doses over time? These nutrients being sugar and other non-fibrous carbohydrates. My money’s on the latter. Obviously there are rare medical conditions that would make a child exempt from this rant, emphasis on rare. Excessively rare.

It is pretty frightening to witness how easily money-driven government recommendations, following the herd, and media lies can wield an entire society of people into poisoning their own children as well as themselves, without a second thought. Buy and large, kids are active without having to be told. It is simply the nature of young children to run around acting hyper and this particular childhood feature is not going anywhere. It would be much easier, not to mention one hundred times more effective, to limit or eliminate worthless nutritional garbage from our children’s diets, than to try and arbitrarily force them to burn off the garbage “playing outside”. Here is the bottom line. Once America learns that in reality, bacon is significantly healthier than Cheerios, the obesity problem will be on thin ice. Don’t hold your breath.

Newer Post
Fish oil protects for up to seven years against psychoses
Older Post
Nigella sativa: might not be a testosterone booster, but is an effective slimming supplement