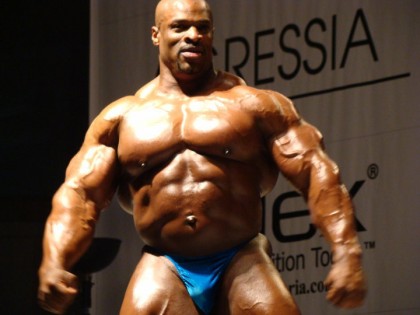 There have been a lot of articles written over the years about stomach distension and its various causes, but most of them have tended to focus on the more attention grabbing sort, while minimizing or even neglecting to mention the wide range of potential factors that contribute to this condition. Even worse is that the majority fail to provide any sort of remedy for this unsightly malady, leaving the reader with the question “what do I do now?” as his final thoughts. With this in mind, I decided at the beginning of this piece to provide a comprehensive overview of the subject; examining both its causes and cures. By understanding how this condition develops, you will be better qualified to analyze your own situation and begin taking steps to undo the years of damage that modern bodybuilding practices have wrought on your waistline. Whether you are currently suffering from distension or are simply seeking to improve upon what you already have, you will find the answers here.

without doubt, growth hormone and insulin have shouldered the brunt of the blame, with everyone from your typical board poster, to industry writers and even some coaches placing the blame at its feet. Hell, about 15 years ago we even coined the term “GH gut” as a way to describe the bulging midsections that began appearing on professional stages with ever-increasing frequency. So, while it would be ignorant to suggest that these 2 hormones are of no consequence, the fact is that there are numerous causes commonly associated with this condition, each of which will need to be addressed if one ever hopes to obtain the tightest waist possible.

Although taking steps to rectify these issues is a great start, focusing on their removal alone will yield only partial results, as a wasp-waist does not come about solely through the absence of problems. Rather, it is the culmination of various techniques and practices, in combination with the elimination of problems, which will allow you to reduce your waist beyond its natural, predetermined limits. Without actively working towards this goal, you will never garner optimal results from your waist reduction program, thereby failing to differentiate yourself from your peers in this area of your development.

However, you should understand right up front that shrinking one’s midsection to the smallest possible degree takes both time and effort. It does not come easily, and neither do results come rapidly, but I can guarantee that with determination and consistency, you will be able to achieve dramatic results no matter who you are. In extreme cases it may be possible to decrease one’s waist size by as much as 6-7 inches, while those bodybuilders with less serious distension can usually chop off at least 3-4 inches from their midsection. Even those with no noticeable distension are usually capable of dropping 2-3 inches.

These are pretty lofty claims, but any disbelief one might hold in regard to them stems from ignorance concerning the tools which are available. Some of the technique and practices we will cover are literally 100’s of years old, originating in Old World Europe during the Victorian times, while others were well known by our Golden Era pros, who considered them part of any serious training program. Regardless of the source, every recommendation presented here has been proven to yield positive results when applied faithfully and correctly. Unfortunately, few bodybuilders today are willing to invest the time and effort necessary to obtain the type of results they are capable of, but for those of you who are committed to the task at hand, the benefits are well worth it, allowing you to create a midsection more reminiscent of Frank Zane than Ronnie Coleman, regardless of how much muscle mass you might carry.

With modern professional bodybuilding placing relatively little emphasis on the waistline compared to generations past, some of those who grew up in this era are bound to question the value of pursuing such a goal. With so few current real-world examples to model oneself after, many are liable to conclude that it is of little significance, with their time better spent elsewhere. After all, if the pros don’t seem to be too concerned, why should we? To that I say “consider posing”. It is the sole vehicle through which we display our physiques to the judges, making its mastery vitally important for anyone wishing to showcase their physique to its best advantage, yet how many pros can’t even perform the mandatories properly, let alone competently hit a vacuum or a twisting ¾ back shot?”

Many of the old-school bodybuilders understood this simple concept, leading them to devote a tremendous amount of time and energy into mastering this fundamental art-form, while today’s bodybuilders seem to have lost sight of its importance. The end result? Awe-inspiring physique displays have been replaced with mock posing routines that typically involve little more than stomping back and forth across the stage as the bodybuilder pumps his fist in the air and begs for applause. Despite these shortcomings, the fact remains that posing is one of the most critical elements of competition success, and this fact will never change regardless of how little time today’s pros invest in it. It is no different with the midsection. The waist is the centerpiece of the physique; the focal point of the X-frame to which the eyes are naturally drawn. Having a disproportionate midsection detracts from shoulder width and quad sweep, throws off one’s balance, and diminishes aesthetic appeal, in addition to limiting the bodybuilder’s repertoire of poses and taking away from the overall impressiveness of the physique.

Can you imagine what Arnold would have looked like in the twisting one-arm biceps shot with a distended stomach? What about Frank Zane attempting to perform his famous vacuum pose with a balloon belly? Or, how about Lee Haney hitting his tremendously impressive front double biceps with a big ole’ gut sticking out farther than his chest? While these scenarios may sound a bit ridiculous at first, they don’t seem too far-fetched when we realize that they have taken place repeatedly on today’s stages—just under different names. Had any of the above mentioned men failed to demonstrate all-around abdominal development and control, they would not be remembered as the great bodybuilders they are today, as this prerequisite was vital in being able to pull off several of their most impressive poses.

A failure to take this area of one’s development seriously is the #1 reason for the loss of aesthetic appeal in bodybuilding today, with both traditionalists and those from the aesthetic camp voicing loud disapproval over this recent trend. Some will argue that the sheer increase in muscle size is at fault, and while it is true that some bodybuilders have outgrown their frame’s capacity to hold aesthetically pleasing mass, it is the absence of a tight, concave midsection that is primarily to blame. One could argue that incompetence in the posing department is also part of the equation—an observation that certainly has merit. With such a close connection between a classic waistline and the ability to perform many of the most aesthetically pleasing poses, this should provide all the motivation one needs to reprioritize their physique goals.

Although the example set for us by our predecessors may be inspiring, inspiration is of no value if one does not take action to make it a reality. This generation of bodybuilders is at a disadvantageous compared to those of generations past, as the new standard for muscle size has made it even more difficult to achieve a wasp waist. Rather than just training the abs, perfecting one’s posing, and performing some occasional vacuum training, today’s bodybuilder will likely have to take additional steps in order to achieve a similar appearance. However, that which is worthwhile is rarely easy, making your achievement all the greater and much more likely to be rewarded by the judges when compared alongside your bloated brethren on contest day.
If you seek to implement all of the suggestions presented in this article, be prepared to invest a moderate amount of cash and a considerable amount of time making it happen. Spending additional time in the gym and at home is mandatory. You may also need to enlist the help of specialists, purchase additional supplements, and make adjustments to various aspects of your lifestyle and training in order to facilitate maximum progress.

Coming up in Part 2 we will jump right into the root causes behind stomach distension.