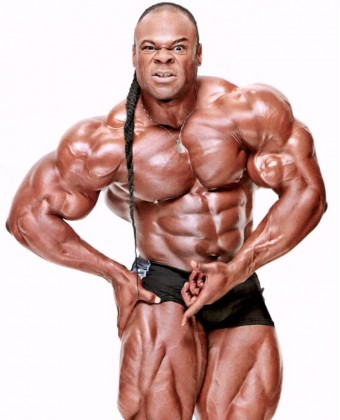 “Always a bridesmaid, never a bride” they say. A cliche usually bestowed on anyone who is repeatedly reduced to runner up status despite their consistent efforts to be number 1. In the world of bodybuilding in 2015, the cliche instantly attaches itself to Kai Greene. Though he had a rocky start in his Olympia career, over the last handful of years he has established himself as a guaranteed top 3 finisher and number 2 bodybuilder on the planet.

When all is said and done and Kai Greene’s career at the top of the IFBB is over, the question that strikes me is; Will he join the ranks of Shawn Ray, Kevin Levrone, and Flex Wheeler in becoming a hall of famer who never quite grasped the prestigious Sandow? Or will he follow in the footsteps of the most famous runner up in the history of the sport Jay Cutler and eventually topple the champ and claim victory? Many parallels could be drawn between early 2000 Cutler and modern day Kai Greene (situationally, not physically) but also many differences. For one, Jay Cutler was chasing the man who carried more muscle tissue than anyone else on the planet in Ronnie Coleman. While that task is certainly laughably difficult and extreme, it at least had an obvious path to follow in order to take down the goliath. That path? Be as big and gnarly looking as humanly possible.

The situation with Kai Greene chasing Phil Heath is quite different. Kai already possesses more muscle than Phil, which means he has to bring a different approach in attempting to knock the champ off. It’s much more tangible to train to be bigger than someone (or catch up in size). Lift more, eat more, take more, do more, grow more. Kai has shown up as the biggest guy in the show and been penalized for it. He wasn’t strictly penalized for being somewhat “off” either; It was universally agreed upon from judges and media personnel that he simply brought TOO much size for his frame. What do you do with THAT feedback?

I feel Kai has certainly passed his prime in terms of muscle fullness and symmetry. He had a “look” and roundness in his early to mid professional career that simply is lacking in certain muscle groups on him today. I am not implying that he has regressed into a shadow of his former self, but anyone who denies that certain muscles are flattening out and losing the shape they once had (just compare his chest and delts in 2007-2011 to this year) is simply in fan denial or lacking any sort of objective eye. This is more of a testament to how good he was, not how bad he is. My point is, although Heath might have had an off year, I think it is premature to assume that indicates he has passed his prime and now is permanently regressing. I think Kai might achieve new levels of conditioning but overall I feel we have seen his best overall package, and he is quite a bit older than the champ.

However, the Jay Cutler who won the Olympia was not the best Jay Cutler we ever saw by any means, which proves that the circumstances of your competition is just as important in the equation of success as your own personal efforts. He did manage to come back in 2009 and bring one of the top showings of his career, which still to this day is one of the most impressive comebacks in bodybuilding history.

Will Kai benefit from a fortunate turn of events and begin his reign late in his career like Mr.Cutler? Or will he be reduced to the legend of “uncrowned Mr.O” which he will share with some of the most popular bodybuilders of all time. Judging by the looks of some of the upcoming talent in the IFBB, it’s hard to imagine a scenario where everything finally goes right for Greene. Time will tell!