How Much Protein Do You Really Need? 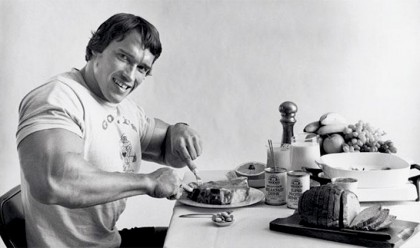 Today, it’s not uncommon for a 200-pound bodybuilder to consume 300-400 grams of protein per day. This appears to be excessive when compared to the Recommended Daily Allowance of 60 grams per day. There has been a long debate on how much protein is needed to maximize muscle growth. Many doctors claim that Americans consume too much protein, and that this can lead to kidney disease, osteoporosis, prostate cancer, and diabetes. It has long been theorized that even highly active people can assimilate no more than 25 grams of protein at one time. There can be a large gap in the amount of protein that any individual may need and can absorb at one sitting. There are several factors that may determine this.

It would be hard to imagine that a 250-pound bodybuilder with less than ten percent body fat would require the same amount of protein as a 170-pound person with above twenty percent body fat. The amount of muscle mass present is one factor that will determine protein requirements. Even if both of these individuals are sedentary, protein needs will still vary due to variance in lean muscle tissue. Muscle tissue is broken down on a daily basis whether an individual is active or not. The ability of muscle tissue to be repaired as fast as it is broken down can be determined by several factors such as the presence of anabolic or catabolic hormones, and protein consumption. Protein contains amino acids that work to repair damaged muscle tissue, and without enough of these amino acids present, hormonal balance can only play a limited role. The 250-pound bodybuilder will have a much larger amount of protein being broken down than the 170-pound individual, and this will require more protein to be consumed to just maintain muscle mass. Basal energy needs and the amount of protein turned over in a day are related to the amount of active muscle mass.

The function of protein goes well beyond than that of muscle repair. It includes hormone secretion, red blood cell repair, digestion, water balance, and transporting nutrients to and from cells, muscle contraction, and the carrying of oxygen throughout the body. The Recommended Daily Allowance of protein that has been set, did not take into consideration that a bodybuilder or more active person would require a much higher amount of protein due to all the functions that protein is required for. Along with muscle repair, the other functions that protein is responsible for will not be at the same demand in a sedentary person when compared to a bodybuilder.

Just like with protein requirements, the amount of protein that can be absorbed will vary from person to person. There really is no set rate that can be applied to everyone. Many still believe that only 20-30 grams of protein can be utilized at any one given time. If this is the case, there would be no need for anyone, bodybuilder or not, to consume more than 150-180 grams of protein a day when consuming the average five to six meals per day. Many of the studies that suggest this are very misleading. They often involve non-training subjects that have not taken in larger amounts of protein until the study was performed. I have already covered the difference in requirements between active and non-active people. Absorption rates will also vary due to protein requirements. Proteases and peptidases are enzymes that split proteins into small peptides and amino acids to be utilized in the body. When protein has not been consumed in moderate to large amounts on a regular basis, these digestive enzymes will be lacking and the body will not be able to handle larger amounts of protein. This will lead to stomach distress. When protein intake is gradually increased over time, the body will adjust and more enzymes will be produced. This can be compared to being lactose intolerant. Lactase is an enzyme present in the body that breaks down lactose found in dairy. When this enzyme is not present at a high enough level, lactose can’t be broken down efficiently and this leads to poor absorption and stomach issues. While there are cases of people being truly lactose intolerant, the intolerance is often from not consuming dairy on a regular basis, which results in the lactase enzyme not being present at high enough levels to aid in digestion. There are groups of people that lack this enzyme, but more often than not, it is a deficiency from lack of dairy consumption. This is the same with protein. If someone consumes protein in small quantities, they can’t take in 50 grams at one time and expect to absorb much of it.

It’s sometimes thought that consuming large amounts protein can lead to many health problems. There have been claims that too much protein will lead to kidney disease. The studies that have suggested this are often misleading. The information taken from the studies that suggest this are done on subjects that already have kidney problems. People with kidney problems already have trouble excreting urea, and this leads to more stress on the kidneys. There is no evidence that anyone with normal kidney function will develop kidney disease from taking in larger amounts of protein.

It was once believed that high protein diets increased the risk of cardiovascular disease. When protein is increased while decreasing fats and carbohydrates, blood lipids improve and the risk of cardiovascular disease actually decreases. Many of the concerns that people have with a high protein diet are false. In fact, higher amounts of protein have been shown to prevent many health conditions that it was once thought to cause. Instead of increasing the risk of osteoporosis, a higher protein diet has been shown to increase bone density.

The amount of protein that should be consumed is very debatable. The amount of protein that should be required by someone trying to add muscle mass that is training intensely will be much higher in comparison to someone that spends most of his or her time doing cardio. An individual that lifts weights will have a higher requirement for protein due to more muscle needing repair. This person should consume protein in the range of 1.5-2 grams of protein per pound of bodyweight per day. Someone that is not looking to add muscle mass should consume 1 gram of protein per pound of bodyweight for optimal health. Although this person is not repairing the amount of tissue as the weight lifter, there are many other functions that protein is responsible for that everyone can benefit from.