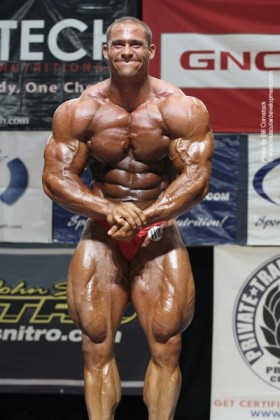 Trey Brewer, 5’11 feet tall, weighing 315 + lbs off season and 22 years old at the time coming from Atlanta, Georgia – struck down like lightning into the bodybuilding industry back in the year of 2006.

By winning the Excalibur super heavy weights and the overall class in 2006 and by being the owner of a massive physique at his young age with particularly huge quads, Brewers name spread over the floors and stages of the industry extremely fast. The hype around the young man grew very quickly and so did the expectations around him and his possible potential for the future of his bodybuilding career. For many people the young bodybuilder became the new hope, the promise, the future of bodybuilding and the one who probably would replace or even knock out Mr. Olympia Jay Cutler at one point in time.

Brewer was so promising that the giant supplement company BSN signed a huge and exclusive sponsorship contract with him side by side by another BSN athlete at the time – none other than 8 x Mr. Olympia Ronnie Coleman.

Further on we need to remember that Brewer was only in the early 20’s when everything basically changed for him over a night when after he became the Excalibur overall champion. Considering all the hype around Brewer and due to parts of a industry which were basically screaming “this young kid will be the next IFBB Pro he has the ability to crush his opponents at Nationals” this must naturally has put a lot of stress and pressure upon him.

As a result of Brewers acknowledgement and fast career advancement and the stressful situation he almost went crazy about gaining size after his amateur overall win. The young bodybuilder’s extreme weight gain got him more or less notoriously known for his unhealthy sumo bulking modes. Additionally along with business marketing powers around him Brewer had decided that he was going to make a massive impact at the upcoming nationals. In addition even at his young age he was one of the biggest guys around at the expos during this time.

How did Brewers bodybuilding career turn out then – did he eventually end up beside Coleman or Cutler during the mandatory poses at the Mr. Olympia stage? – No as many of us already know – far from that.

Brewer did go after the pro card at the NPC Nationals in 2008 and 2009. Nevertheless he couldn’t really deliver upon the expectations parts of the industry and the supplement company was hoping for. The bodybuilder from Georgia came into the contest either too soft or as in his last show the back in 2009 he looked over dieted and almost burned out. The shape and conditioning that was the deal back at Excalibur back 2006 was never accomplished again.

The former Excalibur winner took 8th place at the NPC Nationals in 2009 and never competed again after that. Brewer decided to finally hang up his posing trunks during 2010 to pursue a new and healthier direction in life.

Regarding Brewer’s brief bodybuilding career I believe that he was in the beginning of getting to know his own body and which diets and contest preparations were the best for his conditioning. Everything went very fast for Brewer – the hype of being the new mass kid on the block must have taken its toll on the whole atmosphere around him.

I don’t really blame him – put a young guy in his position – it is not easy to cope with cash, fame or expectations in any kind of sport. As an effect of the situation, this is highly some of the key factors to why Brewers career turned out like it did in the end.

The years after he ended his career as a competitive bodybuilder Brewer turned his career into a healthier and more positive direction. Brewer started to work as a personal trainer back in Smyrna, Atlanta GA. Furthermore and as far as I know he also started to work towards a goal of becoming a firefighter – a job which provides a lot of great benefits like steady pay, social insurance and a pension plan.

Moreover, I believe that Brewer deserves lot more credit compared to what he has gotten over the years. When I look at pictures of him during his earlier shows he looked great as an amateur. Brewer had a massive overall package, huge quads and was in really good conditioning especially the physique he presented when he won his overall title back in 2006. This was also during a period of time when he had more harmony around his training, contest preparation and life in general. Additionally I wonder how many of his worst critics has accomplished or ever will come close to what he did as young guy in the beginning of his early 20s as a competitive bodybuilder.

Final words, even if Trey Brewer never became a IFBB Pro he will go down in the history books of bodybuilding as one of the better young super heavy weights that ever entered a NPC stage.