EPO – Is It Worth The Risk? 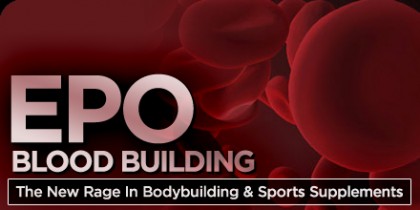 Every performance-enhancing drug carries some kind of potential risk. In fact, there is not a prescription drug on the market today that is free of side-effects. When the FDA evaluates a new drug for approval, the medical benefits and risks of this drug are examined thoroughly before a decision is made to approve or deny the drug. If the side-effects of the drug outweigh the benefits, a denial is imminent.

Oxandrolone (Anavar) is another performance enhancing drug that is FDA approved to treat certain medical conditions. This anabolic steroid has a low risk for side-effects when being used for medical treatment or when being used by bodybuilders to increase strength and muscle mass. This has made the drug very popular among athletes and bodybuilders.

Erythropoietin (EPO) has been used by certain groups of endurance athletes, boxers, MMA fighters, and some bodybuilders to improve performance. As with many drugs, the potential side-effects and benefits should be evaluated with EPO when use by an athlete is considered.

EPO is a hormone produced by the kidney. After it is released into the bloodstream, it binds with receptors in bone marrow, where it stimulates the production of red blood cells. Medically, this hormone is used to treat certain forms of anemia. Since EPO accelerates red cell production, it also increases oxygen carrying capacity. It didn’t take the athletic community long to catch on to how this could increase performance.

Exogenous EPO first hit the U.S. market in 1984. Prior to this, Anadrol 50 was the primary drug used to treat anemia. In the sports world, the only way to increase red blood cell count before exogenous EPO existed was through blood transfusions and anabolic steroids. Due to anabolic steroid testing, blood transfusions were the primary means to increasing red blood cell count at one time.

Synthetic EPO has changed how blood doping is achieved. There is no need for transfusions anymore. An athlete can now inject EPO to increase circulating red blood cells. Since EPO produced in a lab is identical to the natural form, testing has been difficult. EPO has become popular with some athletes because of the increased muscular and cardiovascular endurance, increased energy levels, and even an increase in protein synthesis. Increases in endurance by more than 15 percent have been reported with EPO. This is a substantial amount to any endurance athlete.

An average hematocrit number is 40. This means 40 percent of the volume of blood is composed of red blood cells. Athletes often have a higher than average hematocrit number, even more so if anabolic steroids are being used. When an athlete injects EPO, hematocrit can rise as much as 40 percent. A rise of up to 40 percent in red blood cell count to an already elevated count for an athlete or steroid user can tremendously enhance performance.

Exogenous EPO gained enormous attention when cyclists were being accused of EPO use starting in the year 2010. Floyd Landis, Lance Armstrong, and several other cyclists accused of using EPO have either won or placed very high in the Tour de France. This is proof of how powerful EPO can be at enhancing endurance.

Even though synthetic EPO has been available since 1984, its performance enhancing effects were not well known outside of the cycling community, until the past decade. EPO use has since branched out to professional boxing, MMA, and bodybuilding. Fighters have started using EPO for its ability to enhance muscular endurance in the later rounds of a fight. There are bodybuilders that have used EPO for its ability to increase red blood cell count, which some believe can increase muscle fullness and vascularity of water balance is in the right spot.

While an increase in red blood cell count above normal levels with EPO will increase athletic performance, it will also put the user at risk for some serious side-effects. EPO is much more dangerous than using anabolic steroids, as the risk of death does exist. Exogenous EPO replaced the anabolic steroid, Anadrol 50 as a treatment for anemia in the 1980’s. When EPO is managed in a medical setting, rather than being used to enhance athletic performance, it is much safer than Anadrol 50. This oral steroid is extremely toxic and can lead to sever liver damage with long-term use. When EPO is used to enhance athletic performance instead of treating a medical condition under the management of a doctor, the risks of this drug change dramatically.

When a loss of water or dehydration occurs while taking EPO, blood thickens due to the increase of circulating red blood cells. This raises the risks of high blood pressure, congestive heart failure, and clot formation. When synthetic EPO first became available in Europe, there were reports of cyclists dying during their sleep. It was reported that the cyclists died from a combination of thickened blood from EPO, dehydration, which led to a heart attack.

Diuretics and EPO can easily be a deadly combination. Bodybuilders often walk on stage severely dehydrated from diuretics, and if EPO is being used, the blood is thickened. This could lead to heart failure or stoke.

Cyclists, fighters, and other endurance athletes will attempt to stay as hydrated as possible prior to and throughout a competition. This lessens the risks of EPO use. On the other hand, a bodybuilder, will lower fluid intake up until contest day. If EPO is being used, this can lead to a disaster, and while there are many different rumors floating around, it is believed that this combination caused the death of bodybuilder Andreas Munzer in 1996.

When EPO is used properly and closely monitored, death is unlikely, but there are still many other side-effects. Some users may experience dizziness, flu-like symptoms, headaches, muscle pain, and fatigue.

There is no doubt that EPO can greatly enhance the performance of an endurance athlete by increasing red blood cell count, but it is also well known how risky this drug can be. It is believed that EPO can increase glycogen in the muscles, leading to fuller looking muscles, and the increased blood volume will lead to an increase in vascularity. Many are skeptical at how effective EPO actually is when used as a bodybuilding purpose. The risks are extremely high and the benefits are questionable. This is a case where the risks greatly outweigh the potential benefits.