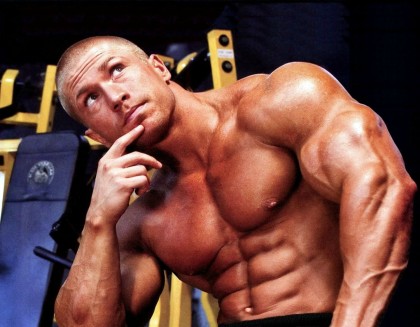 There has been a long held belief that bodybuilders, or anyone that is a highly gifted athlete, lacks intelligence. Lets face it, if you have had a physics exam that you needed help studying for, the jock in your physics class or the guy at the gym with twenty-two inch arms is not the guy that you would call on! You would probably call on the geeky guy from study hall that has never stepped foot in a gym, and who has been shorted of all possible athletic ability.

The classic stereotype of the “dumb jock” persona is seen in countless movies, TV shows, and cartoons. It is perceived that the more muscle a person has, the less brain power he has. Many find it hard to believe that brains and brawn can coexist.

The brain contains receptors for thyroid hormones and six classes of steroid hormones that are synthesized from cholesterol: Androgens (testosterone,) estrogens, progestin, glucocorticoids, mineral corticoids, and vitamin D. The receptors are found in select populations of neurons in the brain and relevant organs in the body. These hormones bind to receptor proteins that in turn bind to DNA and regulate the action of genes. This process can result in long-lasting changes in cell structure and function. Hormones are important for adaptation and protection, but stress hormones, such as the lucocorticoid cortisol, can alter brain function, including the brain’s capacity to learn. Severe and prolonged stress can impair the ability of the brain to function normally for a period of time. The way the brain responds to hormones indicates that the brain is very capable of responding to environmental signals, and the brain does not attempt to adjust its performance in response to a changing environment. The changes that come from stress and the hormone cortisol are obviously not very favorable, but other hormones have shown to create positive changes in the brain and the body.

Testosterone, estrogen, and progesterone are often referred to as sex hormones. The increased levels of the sex hormone testosterone induce changes in cell structure and chemistry. It also shows widespread effects on many functions of the brain, such as attention, motor control, pain, mood, and memory. Testosterone levels decline as men age, as does cognitive function. Low testosterone levels have been observed in patients with Alzheimer’s disease and mild cognitive impairment.

Twenty-five healthy men, age 50-80 years, completed a randomized, double-blind, placebo controlled study. Participants received weekly intramuscular injections of either 100mg of testosterone enanthate or placebo (saline) for 6 weeks. Cognitive evaluations were conducted at week 3 and week 6 of treatment by use of neuropsychological tests. Total testosterone was raised an average of 130% from baseline at week 3 and 116% at week 6 in the treated group. Significant improvements in cognition were observed for spatial memory (recall of a walking route,) spatial ability (block construction) and verbal memory (recall of a short story) in the group treated with testosterone injections compared to the placebo group.

With age, new learning is slower, new information is processed less carefully, and details often slip. These changes give rise to the “senior moment” in healthy elders and to cognitive impairment and dementia in others. While these conditions are inevitable at some point with age, a contributing factor is often low sex hormones such as testosterone.

While we know that testosterone can slow mental decline, it is now thought that this hormone may actually be involved in determining a person’s intelligence before they are even born. People have debated for centuries whether a person’s intelligence is mostly dictated by nature or nurture. Parents often read how-to books and have genetic testing performed to figure out how to develop the next child prodigy. A few experts now claim that testosterone may be behind the development of superior intelligence.

University of Alberta researcher, Martin Mrazik and a colleague from Rider University recently linked prenatal testosterone exposure to children with high mental capabilities. Testosterone influences the right side of the brain, and that is where our math, science, reasoning, and abstract thinking all take place. Children that have above-average intelligence have very highly developed brain networks in the area that testosterone influences, while Mrazik claims that excessive prenatal exposure to testosterone leads to higher intelligence, it is unclear where the exposure originated. Past studies have demonstrated that negative traits such as physical and cognitive can be triggered in the womb, so it is believed that positive traits can be developed there as well. The children that had higher than normal intelligence were found to have a higher incidence of short-sightedness and allergies, which are believed to also be associated with exposure to excess testosterone in the prenatal environment. This research is still in its early stages, and there are still some uncertainties. It does support how essential testosterone is for developing the brain and protecting the brain from disease as we age.

When we think of the powers of testosterone, we usually don’t consider mental processes. However, evidence suggests that normal to high levels of testosterone are associated with enhanced intelligence and mental longevity.