DHEA – does it have any beneficial non-hormonal effects?

DHEA is produced mainly by the adrenal cortex, and is rapidly sulfated by sulfotransferases into DHEA-S. DHEA and its sulfated form DHEA-S is the most abundant steroid (pro)hormone circulating in the blood stream.[1] The sulfated from of DHEA has a longer half-life in the blood and its levels remain stable throughout the day, are not altered significantly by the menstrual cycle. When getting a blood test for DHEA, the fraction that is routinely measured is therefore DHEA-S. In response to metabolic demand, DHEA-S is rapidly hydrolyzed back to DHEA by sulfatases.

DHEA levels decrease approximately 80% between ages 25 and 75 year.[2, 3] This large decline in DHEA spurred research interest in the possibility that aging related DHEA deficiency may play a role in the deterioration of physiological and metabolic functions with aging, and in the development of chronic diseases. 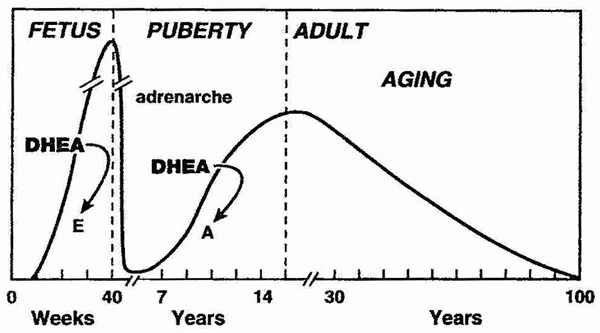 How does DHEA really work?

No specific cellular nuclear receptor has been identified for DHEA.[4] Therefore, the actions of DHEA have traditionally been thought to be mediated via conversion to testosterone and estradiol, which in turn activate androgen and estrogen receptors and thereby elicits their effects.[5-7] However, emerging research is showing that the action of DHEA also involves multiple other receptors, and that DHEA and /or its oxygenated metabolites, such as epiandrosterone (EpiA) metabolites.[8, 9]

One DHEA activated receptor, a cell surface (membrane-bound) receptor, that binds DHEA with high affinity has been identified in the endothelium (blood vessel wall), heart, liver, and kidney.[10-13] This receptor is coupled to eNOS (endothelial nitric oxide synthase) [10-12], the enzyme that activates the synthesis of NO (nitric oxide).[14] Endothelial cells exposed to varying concentrations of DHEA produced dose-dependent increased activation of eNOS and elevated nitrate levels (a bi-product of NO).[10, 12] This activation of eNOS by DHEA was not inhibited by the antagonists of the estrogen, androgen, or progesterone receptors, suggesting that eNOS activation by DHEA was through a very specific receptor for DHEA.[12] Support for this comes from another study demonstrating that DHEA supplementation 50 g/day for 2 months in healthy men aged 58+ years increased cGMP (platelet cyclic guanosine-monophosphate) concentrations, which is a marker of NO production.[15]

DHEA also activates an important vascular endothelial cell signaling pathway (ERK1/2) which plays an important role in vascular function.[16] This, combined with the DHEA induced elevation in NO production could explain the beneficial cardiovascular effects which have been seen in several DHEA supplementation studies in humans; such as improvement in vascular endothelial function, arterial stiffness and insulin sensitivity. [17-20]

Another exciting finding is that a 7-beta hydroxylated derivative of DHEA is physiologically active via a putative nuclear receptor.[21-23] It is especially notable that 7-beta-hydroxy-epiandrosterone (EpiA) inhibits COX-2 activity (the same enzyme that is targeted by NSAID) and markedly decreases production of the inflammatory prostaglanding PGE(2).[21, 22] 7-beta-EpiA also stimulates production of the anti-inflammatory prostaglandin PGJ(2).[22] Another study confirmed that 7-beta-EpiA stimulates the production of cell protective (cytoprotective) prostaglandins.[23]

These findings have important implications in health and disease. The inflammatory COX-2/PGE2 pathway is an important contributor to the development of cancer, and suppressing the COX-2/PGE2 pathway is a bona fide target for cancer chemoprevention and therapy.[24] In line with this, it has been speculated that a common factor of cancer and the metabolic syndrome may be low DHEA.[25] Thus, there is a good mechanistic basis for a potential beneficial effect of DHEA in inflammatory conditions and for cancer prevention. 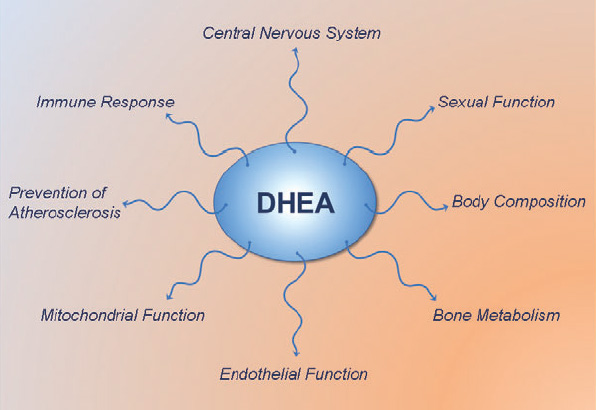 Levels of inflammatory markers, such as serum amyloid protein A and C-reactive protein, are inversely correlated with DHEA-S levels, suggesting a role for DHEA in attenuating inordinate inflammatory responses.[26] In addition, DHEA inhibits production of pro-inflammatory cytokines, such as interleukin-6 (IL-6) and TNF-alpha.[20, 27, 28]
As pro-inflammatory cytokines are known to induce IGF-1 resistance [29], by reducing their production DHEA indirectly may improve the responsiveness to IGF-1. DHEA supplementation also increases absolute levels of IGF-1 [30-35] and DHEA metabolites may stimulate aging cells in the anterior pituitary produce growth hormone (called somatotropes).[36] The stimulatory effect of DHEA on the GH/IGF-1 axis in humans is supported by several DHEA supplementation studies.[32-34, 37]

DHEA supplementation lowers cortisol levels, even in young adults.[38-42] While it is still unknown exactly how DHEA exerts its anti-cortisol effect, several mechanisms have been proposed.[43] One speculation is that DHEA down regulates glucocorticoid receptors.[44, 45]

An increased cortisol:DHEAS ratios may contribute to reduced immunity following physical stress in the elderly[57], and may contribute to the development of cognitive impairment [67, 68] and stress-related psychiatric disorders.[69] The increased ratio of cortisol/DHEA-S is also positively associated with the metabolic syndrome and cancer/all-cause mortality.[70, 71] Thus, improvement of the cortisol/DHEA ratio with DHEA supplementation could help counteract age-related catabolism, metabolic dysfunction and prevent development of chronic disease.

Inhibition of the cortisol amplifier 11beta-HSD1

Cortisol levels in the blood is just one part of the picture. Obese humans and rodents have elevated levels of cortisol inside their fat cells (adipocytes), due to an increased activity of 11beta-HSD1 in adipose tissue.[46, 72-76] 11beta-HSD1 (11beta-hydroxysteroid dehydrogenase type 1) is an enzyme that elevates intracellular cortisol levels, irrespective of circulating cortisol levels in the blood, and thereby amplifies cortisol’s fat accumulating actions.[46, 72, 76]

An increased 11beta-HSD1 activity not promotes expansion of fat stores (especially in the abdominal region) but also contributes to metabolic derangement, which is why 11beta-HSD1 inhibition is an emerging therapeutic target for treatment of obesity, metabolic syndrome and type-2 diabetes.[46, 84-88] DHEA also inhibits 11beta-HSD1 activity in muscle cells, which could be an additional mechanism (on top of simply lowering blood cortisol levels) by which DHEA might prevent cortisol induced insulin resistance and muscle catabolism.[89]
Several studies have demonstrated that DHEA inhibits the activity of 11beta-HSD1 in fat cells from both rodents and humans [90-92], and thereby it counteracts cortisol’s fat storing effect [73, 74]. The inhibitory effect of DHEA on 11beta-HSD1 could be a contributing mechanism to the reduction in total body fat mass [93] and abdominal fat that has been seen with DHEA supplementation.[94]

While many of the effects of DHEA are mediated via conversion to testosterone and estrogen and activation of the androgen and estrogen receptors, the studies outlined here clearly show that DHEA(S) is biologically active in its own right.

DHEA itself acts through specific cell surface receptors to increase eNOS activity and NO production, and contributes to intracellular signaling through activation of several intracellular messengers. DHEA also suppresses many of the detrimental effects of cortisol in muscle and fat tissue, and increases IGF-1 sensitivity and IGF-1 levels. Thus, it is time to re-evaluate the physiological role of DHEA and appreciate its multifaceted health promoting and potential fat loss actions.