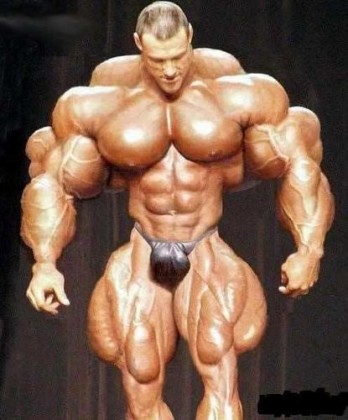 Bodybuilders have a way of turning off the general public. Whether it be other members in the gym or people at the grocery store, the reactions are not always positive. Depending on where you live and the general activity level of the citizens, it’s common for many to respond to the sight of a bodybuilder with an “eew” or another disparaging remark rooted in insecurity. It would be extremely ignorant of me to assume that everyone secretly wants to look like a bodybuilder or that a hyper muscular physique is appealing to everyone, but the fact is that many people simply put bodybuilders down because they are a walking reminder of how little effort they are putting into their own personal goals and physical state.

Now that emcompasses some of the negative reactions, but what about the rest? The bottom line is that many people associate big muscles with small brains, extreme vanity, selfishness, and arrogance. The bodybuilder is your teenage jock bully “on steroids” (sorry, I had to…). It’s very easy to assume that the muscle bound awkward lump walking around the local food mart buying up all the damned chicken is one dimensional, although it isn’t always fair.

Many bodybuilders do no favors to the rest by perpetuating these stereotypes on a constant basis. In the gym they might be yelling loudly (more than is needed), throwing weights around, generally looking like a giant angry anti social ape. Even more offensively, they might be dressed in horrible bodybuilder fashions or wearing clothing just a liiiiittle too tight for no reason at all. In conversation they might abuse the word “bro” more than they abuse dbol. Being extremely bloated and red faced while huffing and puffing like a biggest loser contestant will also not likely help you interact in society like a respectable human.

There’s no need to wear stringer tanks when you have an outbreak of bacne that you can practically see oozing from across the room.

Unless you are Big Ramy, you can find jeans that fit you. If you are a beginner to intermediate level bodybuilder please don’t act like they simply do not make pants to fit your 25 inch quads cause they sure do – It just might require you to go to more than one store (if you can do so without losing your breath).

You don’t need to bring food with you to the mall or any social outing that is less than 90 minutes. I remember attending the Tampa Pro one year and seeing a group of beginning lifters walking around the expo with coolers and tupperware of food, clearly desperate to fit in. But guess what? None of the professionals were doing the same and if they were packing food they sure as hell didn’t make a spectacle of it.

So I urge you to challenge yourself and break the stereotypes. I personally have found that adding muscle to your body can make some people initially react negatively…but it also can add a level of respect if you pair it with some brains and a respectful attitude. Being a bodybuilder is awesome, but don’t forget to be a person too and try to push away that nagging need to let the world know you bodybuild at all times.