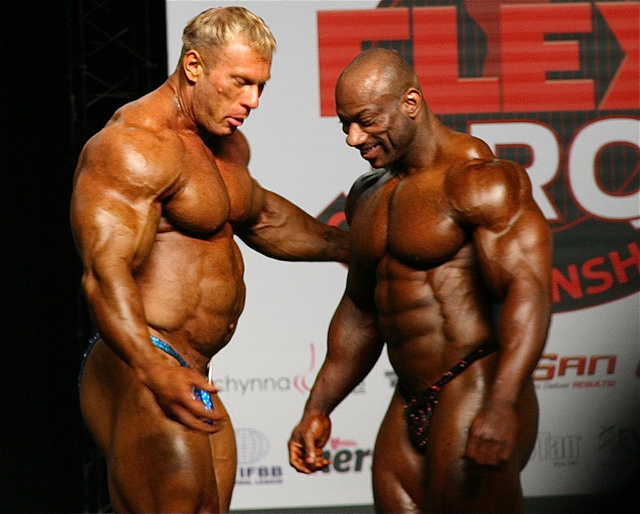 If you don’t read anything else in this section, read this next sentence very carefully. Diet most certainly can and often is a contributor to stomach distension. The degree to which it contributes can range from minor to major, and in many cases it is even the primary cause. There are only 2 kinds of people who deny this. The ones who are still small and have never had to contend with the volume of food necessary to build, let alone maintain pro-level size, and those who are genetically gifted in terms of digestive efficiency. In short, some people just seem to process their food better.

Because of their sheer size, today’s professional bodybuilders eat more than ever before. As the body increases in size, so too does its caloric requirements. This is an indisputable physiological fact. Quite simply, more muscle tissue equals more calories. This is why bodybuilders have to systematically increase their food intake as they grow larger and also why, by the time a bodybuilder reaches pro size, he is often eating two, and in some cases three times as much as he did before he started lifting weights.

Not all systems of the body adapt to stressors at the same rate or to the same degree. For example, the body has a high degree of adaptability to the stressors of weight training, allowing us to add two or more times the amount of muscle mass we had before we started training. In the same way, the more we are exposed to the sun’s rays, the more melanin the skin will produce, making it progressively darker and protecting us from sunburn.

However, one system with a low rate of adaptability would be the digestive system. No matter how much food we eat, our rate of digestion is going to remain about the same. The body is not going to grow longer intestines, increase the potency of stomach acid and digestive enzymes, or speed up the transit of food through the digestive tract. While the stomach may stretch out as a result of eating larger quantities of food, it acts only as a holding compartment and does not increase the rate at which food is digested, assimilated, and eliminated.

Knowing this, what do you think is going to happen when a bodybuilder gets up to eating 5,500 calories of clean food per day? Most pros-size bodybuilders experience stomach distension day in and day out. During the off-season, Dennis Wolf has referred to his bowed out stomach as a “food baby”; one which is consistently birthed by contest day as the result of drastically decreased food intake. Now, there are always going to be people out there who can eat huge quantities of food without experiencing much distension, but for every one of these people, there are going to be 10 others whose digestive systems become overwhelmed by off-season bodybuilding diets, resulting in stomach distension.

If you have ever had to undo your belt buckle or unsnap a button on Thanksgiving Day, imagine eating that same amount of food 7/365. Considering the amount of food the average person eats on that day, this is probably a pretty accurate comparison. If anything, the average person probably consumes less total food on Thanksgiving than your average bodybuilder does on a daily basis.

There are all kinds of digestive issues associated with the typical bodybuilding diet. While all of them are present in non-bodybuilders as well, some of them tend to occur in bodybuilders more frequently due to the amount of food consumed. Without getting into great detail (see other articles of mine on the subject), I will list some of the more common ailments. They include: gas, bloating, constipation, uneliminated digestive matter (fecal matter which has permanently hardened alongside walls of the digestive tract), intestinal water retention, altered intestinal flora, gluten intolerance and other food allergies.

Of course, some of these are more common than others, but all of them occur with regularity in both the bodybuilding and general population. In many cases, the individual may not even know he is afflicted with one or more of these maladies. Without getting into the affect of modern bodybuilding diets on digestive health (that is a whole other subject in itself), let’s just say it is far from optimal, for many reasons, and opens up the possibility for all of these problems and more.

Another problem that qualifies as a digestive issue is distension caused by last-minute carb-loading. Although there can be many different reasons for this, it has become more and more common in recent years, with a significant number of competitors blowing things at the last minute with “carb load gone bad” experiments. The degree to which this affect the midsection can range from barely perceptible to very noticeable. Regardless, steps need to be taken to minimize, and hopefully eliminate this from occurring, but as long as bodybuilders continue to engage in last minute techniques with a high margin of error, it will continue to be a factor in onstage distension.

If we were to ask someone “what muscles cover the front of the stomach?”, the word abs/abdominals will almost always be mentioned, but only a small minority of people will be familiar with the supportive structures which lay beneath the abdominals, and which act as stabilizers, helping us to maintain the shape of our midsection.

The most important of these is the transverse abdominis (the inner-most stomach wall); an underlying sheath of muscle which stretches from hips to sternum and from the midline of the stomach to the spine. Basically, it wraps around the entire midsection like an extra wide powerlifting belt, helping to keep all the internal organs from spilling outwards, while also assisting in respiration.

The problem is that this muscle can be stretched out and weakened, causing the stomach to lose its natural shape and bow outwards. While it is easy to discount the relevance of this factor, it is a common occurrence and plays a minor to moderate role in many cases of stomach distension today. There are two primary ways in which the transverse abdominis can be compromised—through repeated stretching and a lack of training.

The first of these, repeated stretching, can occur in many ways. Over-eating, performing certain exercises (particularly without a belt), and certain exercise techniques are the most common. Regardless of the cause, the more frequently the transverse abdominis is stretched out, the more likely one is to experience a permanent remodeling of the stomach wall. Chronic over-eating speaks for itself, but some lesser known causes include holding ones breath inside the stomach while training. Many bodybuilders, when performing their reps, inadvertently push this air out against their abdominal wall in order to increase core stability. Some powerlifters teach this technique, telling the lifter to deliberately suck as much air into the stomach as possible and hold it there while lifting the weight. This increases strength through improved stability.

In time, this will cause the stomach to distend, which is why many bodybuilding coaches tell their clients to wear a belt during exercises in which intra-abdominal pressure is at its peak, such as squats, leg presses, deadlifts, etc. If this type of repeated stretching did not expand the waistline, no one would be telling their clients to wear a belt. Regardless of whether it comes through training or diet, it will all lead to a permanently enlarged stomach.

The next reason for a weakening of the supportive structures is a lack of training, particularly vacuum training and posing. Vacuum training, which was regularly practiced by many of the old-time champions, can help reverse the deleterious effects of training and diet on the waistline by keeping the transverse abdominis strong and pulled in tight against the body.

In those who take this form of training seriously, it can reprogram the transverse abdominis’s set point, causing the muscle to maintain a concave appearance even when relaxed. Obviously, considering the diets of today’s pros, this is going to be more difficult to achieve, but even so, it would still allow them to pull off a vacuum during competition, which looks great in poses such as the front double biceps and front lat spread and would go a long way in improving their overall impact onstage.

Similar to vacuum training, which helps develop both involuntary and voluntary muscle control, regular posing practice is another form of training that can be used to ensure that the stomach muscles not only retain their form, but are more easily controlled onstage. In my opinion, it makes no sense for a bodybuilder to spend an entire year building up his body through training and diet, but then fail to spend adequate time on the one thing which will allow him to display his musculature to its best advantage. Without regular posing, a bodybuilder will never be capable of properly controlling his midsection come contest day; a self-inflicted injustice.

I am not going to spend much time on this one simply because I believe it makes up a small portion of the overall problem. While it is obvious that today’s bodybuilders have thicker abdominal muscles (all layers of the abdominals, not just the abdominals) than generations past, this does not cause “distension” per say, but rather, an overall thickening of the entire midsection. For the most part, it is not generally extreme enough to cause a big problem. Still, many bodybuilders, especially after they have built sufficient mass, would benefit by altering their training in order to de-emphasize the involvement if these muscles, thereby allowing them to atrophy a bit.

As mentioned previously, a distinction needs to be made between pre-contest and off-season distension. Not because there are necessarily different causes for each (in some cases there are, such as last-minute carb-loading), but because certain factors tend to become more likely culprits depending on which phase the bodybuilder is in. For example, there are many bodybuilders who suffer from significant distension in the off-season, but show up onstage with a comparatively flat waistline. In these cases, food-based distention was likely the main cause, as organs don’t shrink once enlarged and in cases of extreme visceral fat build-up (examples: Kovacs, Palumbo), a good portion of it tends to remain even after subcutaneous fat has been lost.

By the time a bodybuilder reaches the contest stage, aside from last-minute dietary stratagem gone amiss, food-based distension usually plays much less of a role. The bodybuilders who are the most likely to carry this problem over to the stage are those who must continue eating a lot even during contest prep. However, most bodybuilder will end up cutting their food intake enough to eliminate the majority of food-based distension. In the same way, bodybuilders with low to moderate visceral fat stores will usually lose most of it by the time they hit the stage, as visceral fat is burned along with sub-q fat.

In the end, the reasons for a bulging gut are many, with circumstances dictating which factors are most likely to play a role and to what degree. Blaming the entire problem on drugs is idiotic, and while there have certainly been more than a few cases where they were rightfully listed as the primary offender, there have been just as many instances where they were not. However, one thing is certain. With bodybuilders continuing to get bigger, this problem is unlikely to go away unless these guys learn how to utilize growth hormone and insulin correctly, while also taking as many steps as possible to minimize the various causes of distension. The information is out there, yet we continue to see bodybuilders acting in ignorance of their own condition. Perhaps this will change in the near future. I am optimistic.