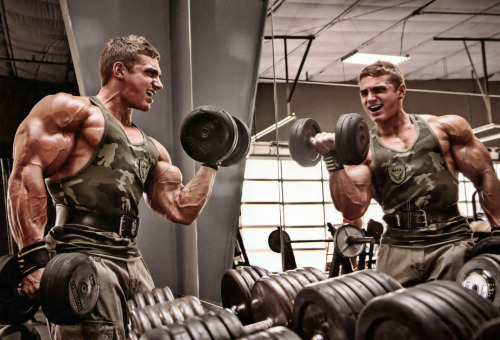 Rivalries are often the lifeblood of sports entertainment. If a given sport, along with it’s athletes, is not interesting to the viewer, the popularity of said sport will suffer greatly. That said, few things in sports are as interesting or polarizing as a good rivalry. In fact, one of the factors contributing to this year’s lackluster Olympia was a lack of rivalries. While Shawn Rhoden and Dennis Wolf are fairly classic rivals, the main rivalry in our sport was completely missing from the Olympia. From Arnold and Sergio to Phil and Kai, rivalries have always played a substantial role in keeping our otherwise boring sport lively. Now the question becomes, after our Shawn vs Dennis and Phil vs Kai rivalries sail off into the sunset, what will bodybuilding’s next great rivalry be?

Many signs point to bodybuilding’s next great rivalry being between Cody Montgomery and Dominick Cardone. Just to be clear, rivalry sometimes implies two people who do not like each other, but in the case of Cody and Dominick, this is not the case. Cody and Dominick are competitive rivals, not personal rivals. Ironically, bodybuilding’s “next” great rivalry is actually several years old already. Three years ago 19 year old Dominick took 2nd to 17 year old Cody at Teen Nationals, and unbeknownst to most bodybuilding fans, a brand new bodybuilding rivalry was started. Although Cody and Dominick have not stepped on stage together since that meeting at Teen Nationals, the rivalry continues to burn strong via very different, but both very meteoric, rises to IFBB Pro status.

Cody went on to win two more Teen National championships, a record that may never be matched, as well as the collegiate nationals, all on his way to becoming arguably the greatest teen bodybuilder in the sport’s history. Cody then took a year off to prepare for his very first professional qualifier, the 2015 NPC USAs. Most industry insiders agreed that Cody would do well at the national level, but the 20 year old phenom would need a bit more seasoning before he was ready to win his pro card. Low and behold, we were all wrong. Montgomery came into the 2015 USA’s perfectly seasoned, winning the heavyweight class and the overall on his first attempt. One would be hard pressed to find another bodybuilder who did as much steamrolling of the bodybuilding world prior to his or her 21st birthday as Cody Montgomery has.

After taking a controversial 2nd place to Cody at teen nationals, Dominick Cardone, like most of us do at that age, fell victim to general life for two years. Despite not being able to focus much on bodybuilding for the majority of his two years off, Dominick was able to make his comeback at the ultra-competitive Eastern USA Championships and win the overall at 21 years old. Two weeks later at the NPC Nationals, Dominick, just like Cody, won the heavyweight class (narrowly missing the overall) en route to earning his IFBB Pro card. The fact that Cardone had a bumpy two years with little priority put on his physique leading up to these massive back to back wins exemplifies the fact that Dominick is genetic royalty in its purest form.

With three Teen National Championship wins, an overall win at the NPC USA’s, and a slightly younger age, Cody has to be given the edge in regards to how impressive these two athletes are at this time. That said, it must be understood that Cody had a much easier path to follow and was for the most part living in a perfect bodybuilding bubble. At 21 and 22 years old, what the future holds for these two is many times more intriguing than whose resume is currently more impressive. What makes the future of this rivalry even more polarizing is the fact that Cody and Dominick have much different strengths and weaknesses in regards to their physiques.

Cody’s strengths are very unique for a guy who is only 20 years old. They include unbelievable muscle maturity, separation, and overall muscle quality. Simply put, Cody was born to be a bodybuilder. His only struggle might come in the form of a structure that is not prepared for the amount of size he needs to take his bodybuilding career to the next level. Cody certainly has a small waist, but it is not freakishly small. Most would agree that for Cody to make a splash at a show like the Arnold Classic, he will need 20 more pounds of muscle evenly distributed over his frame. These 20 pounds could potentially wreak havoc on Cody’s shape and flow. However, if the 20 pounds does not have a negative impact on his shape and his world class flow stays intact, no bodybuilder will be safe.

Cardone has two glaring strengths. The first is his lower body. Everything is there, quads, hams, glutes, calves, all highly developed and detailed. The second thing is his non existent waistline. Dominick sports one of the greatest quad to waist ratios the sport has seen in some time. Rest assured, successfully finding pants that fit must be no small feat for this 22 year old phenom. Huge legs are the foundation (literally) of any top bodybuilding physique, and with 15 years to go before he hits his peak, Cardone already has this foundation covered. Although Dominick is bottom heavy right now, it is unlikely that his work ethic and vast genetic gifts will not fix this discrepancy in short order. With pro-caliber wheels and possibly the smallest waist in the entire men’s open class today, Dominick’s potential seems virtually limitless.

While Cody is currently a bit more complete than Dominick, Dominick’s wasp waist tells us that the same 20 pounds that could potentially harm Cody, will do little to no harm to Cardone’s shape. It would take a lot more than 20 pounds of muscle to ruin Dominick’s shape. Regardless of how it pans out, it is refreshing to see young talent coming up through the ranks to take over when guys like Branch, Kai, Shawn, and Dexter hang up the trunks. Along with Justin Compton, Dallas McCarver, and Roman Fritz, Cody and Dominick are adding the much needed factor of excitement to our sport.