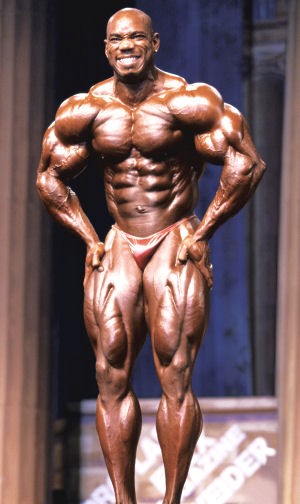 Bodybuilding fans, particularly older bodybuilding fans, have been comparing the bodybuilders of the 90s with the athletes of today to no end in recent years. Most if not all of these fans agree that the general competitiveness, as well as talent of the athletes was far superior in the past. While I would agree that the talent was greater in the 90s, we still have a similar cast of characters in bodybuilding today. In an attempt to rekindle the nostalgic flame of the mid to late 90s bodybuilding landscape, an effective strategy may be to examine similarities of specific athletes from then and now including everything from attitude, placings, hype, and of course, their physique.

We must start by discussing the greatest of all time, Ronnie Coleman. It is unlikely that any fans would argue that the closest athlete to The Big Nasty in today’s field is Phil Heath. Some may argue that Ronnie was much bigger, more dominate, etc. However it is worth noting that until 2003 Ronnie was certainly dominate, but not overwhelmingly so, similar to how Phil is now. As far as size is concerned, The Big Nasty won his first Olympia at about 245 pounds standing 5 foot 11 inches. The Gift won his first Olympia around 235 pounds standing 5 foot 9 inches. So, even the topic of size is really not that far off in regards to Ronnie and Phil. Another aspect of these two mutants that is consistent is their staggered fan base, consisting of many fans that love them as well as many fans that hate them. Differences seem to be rare, but there is one that sticks out like a sore thumb. When Ronnie was rising through the ranks nobody, and I mean nobody, figured him to ever be a threat at the top. Phil on the other hand, was coined as the next Mr Olympia as a 192 lb amateur with a whopping two shows under his belt. If Phil is the modern day Ronnie, one must ask the question of who is the modern day Nasser El Sonbaty, Paul Dillett, or Kevin Levrone? Beginning this discussion with Nasser, Paul, and Kevin while excluding Shawn Ray, Chris Cormier, Flex Wheeler, and Gunter Schlierkamp is not by mistake. Using a “save the best for last” strategy, these three names are chosen first for the simple fact that they do not share as tantalizing similarities to the athletes of today as the latter four names. Using the criteria mentioned earlier, the logical matches to Nasser, Paul, and Kevin today would be Kai Greene, Big Ramy, and Branch Warren, respectively.

Similarities between Kai and Nasser are not overpoweringly strong, however there are some, including their general freakishness, predictions of greatness, unique personas, and wavering placings among the rest of the top pros. Both Nasser and Kai, while being top bodybuilders in the world, have had their share of extreme ups and downs at the top. Kai has taken a couple strong seconds to Phil, most notably at the 2012 Olympia, and many fans felt that Kai actually bested Phil, particularly from the back. This is almost a mirror image of what happened with Dorian and Nasser in 1997 even down to the front/back argument, although in 1997 is was the champ who looked better from the back and the challenger who looked better from the front. Big Ramy is being hyped as the next dominating force in our sport. Unfortunately, there were really no “out of nowhere” freaks, aside from Ronnie, in the late 90s. There was however a monster freak of a man named Paul Dillett. The similarities are scarce but the ones that do exist are very specific. Most notably are the rumors of some sort of rare genetic abnormality, the likes of which has not yet been seen in professional bodybuilding. Aside from this, you also have the fact that these two are both monsters of men with muscle that hangs off them like steaks stabled to a scarecrow, while also sporting hard to believe proportions. The comparisons between Branch Warren and Kevin Levrone are a bit different. Mostly because Kevin, in the eyes of almost any bodybuilding fan, had a much better physique than Branch ever had. The only real physique similarity between these two would be the fact that they have both mastered Kevin’s classic slightly angled to the side, slightly bent over, crab most muscular pose with lethal effectiveness. These two have also shown an amazing ability to not only come back from bad injuries, but to come back in a fashion that simply boggles the mind. Branch and Kevin also share similar placings (between fifth and second) at the top, in respect to their best years. The majority of die hard fans and historians would call these last two examples nit picking, and for good reason. The last comparison however should hold a bit more water (no pun intended). This being the fan bases of The Maryland Muscle Machine and The Texas Rattlesnake. To say these two men have a strong, loyal, and positive fan base is a Lou Ferrigno sized understatement.

This is where the comparisons get interesting. In comparing Dennis Wolf with Gunter Schlierkamp it may be more effective to simply ask the question “what do they not have in common?”. Loud dissatisfied boos from the fans after each of their placings is announced, massively wide shoulders, dramatic X-frames, from Germany, multiple 5th place finishes at the Olympia, never lived up to the potential everyone thought was there, made attempts at acting, etc. These two share so many similarities that I half expect Dennis Wolf to beat Phil at a smaller show a la Gunter beating Ronnie at the 2002 GNC Show Of Strength. Flex Wheeler and Shawn Rhoden are a true bodybuilding comparison for the fact that unlike Branch and Kevin, it is based almost entirely on their physiques alone. Aside from their physique, you do have the consistency of a sort of mysterious aura about them, as well as an extremely quiet demeanor. The physiques of Flex and Shawn are clearly comparable, most obviously with their waists and joints that it seems God mistakenly made out of small Asian female genetics. They both coupled these impossibly small waists and joints with an amount of muscle that even Dexter Jackson would not have bet on them ever achieving.

Comparison number eight can be summed up in one simple word: consistency. Of course this is referring to Dexter Jackson and Shawn Ray. These men are the epitome of consistency, both to the point of being ridiculed by fans and even judges for “staying the same” year to year. Dexter and Shawn are also closer than a father and son in regards to how they climbed to and stayed at the top of the bodybuilding world for years on end. This was done through not overdoing any aspect of the bodybuilding lifestyle, maintaining near perfect proportions, and of course, coming in bone dry and shredded. Last but not least is the ironic comparison of Victor Martinez and Chris Cormier. This comparison is ironic for the fact that Victor and Chris have butted heads on numerous occasions throughout their careers, at times these confrontations even came to blows. Chris and Vic are two of the few bodybuilders in the history of the sport who literally do not have strong or weak body parts. If one is asked what Chris’ or Victor’s best body part is, the answer is like finding Bigfoot, some people will name you a weakness, but they are probably just seeing things. Interestingly, these two rivals’ other common trait is the well documented fact that they are fun guys who like to party. They are not stiffs who never leave the house in fear of missing a meal or possibly being around a non anabolic drug like most obsessive bodybuilders.

Taking everything discussed here into consideration, an argument can still be made that the talent pool was deeper in the 90s than today. However, the cast of characters remains just as diverse, and the level of competition is still extremely high. So who is this era’s Jay Cutler? Who is the man who will dethrone the king? Two possible athletes that would certainly fit this bill are Dallas McCarver and Justin Compton. First and foremost these two have that all American golden boy look. Not only that, but are also very young and have already shown some serious talent as top bodybuilders already. Justin is one of the hardest guys in the IFBB and sports unbelievable shape and symmetry. If he’s capable of maintaining his tight waist while refining all his newly added mass, he will be serious trouble for that Olympia top three. Dallas may not yet be as developed as Justin, but he more than makes up for it by being as wide and big as 95 percent of the IFBB already, while still needing to “fill out his frame”. It is certainly not far-fetched to think that either of these two young guns could shoot up the ranks and take a strong second to Phil in 2016 just as Jay did with Ronnie in 2001.