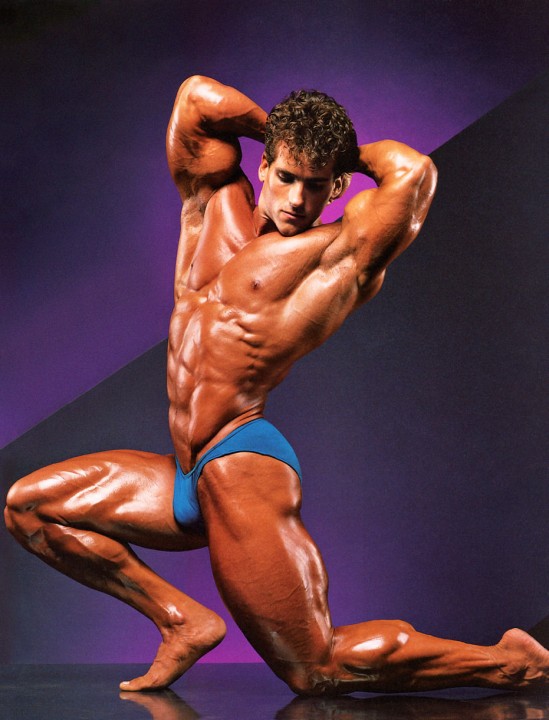 Bodybuilding (at least it was originally) is about building your concept of the perfect physique with very specific intent and focus. It is not simply about adding 5lbs of muscle and watching the scale move or trying to make an XXXL shirt fit tightly. There is a balance and harmony required between the different muscle groups for a physique to be considered the ideal and if proportions are blown then a bodybuilder will be punished for their carelessness and be beaten by someone who has maintained a more aesthetic appearance.

And that’s the word that has lost all of it’s meaning – aesthetic.

The word’s definition can be loosely interpreted in a myriad of ways, not all relating to bodybuilding, but in reference to a well crafted physique forged in the gym it was really a way to describe a body that was simply put together perfectly. Capped deltoids and broad shoulders to contrast a small waist and sweeping quads. Full muscle bellies that allowed for the right amount of development and inflated appearance without looking overstuffed or lacking size with flat edges and strict angles.

In todays fitness climate the word’s meaning has been completely lost. There is one thing that is not arguable in bodybuilding and that is the fact that building muscle is a prerequisite for possessing a winning physique. Like I said earlier, it does not mean building muscle at the expense of all other factors, but if you have not added a competitive amount of lean tissue onto your frame then all other adjectives such as “aesthetic” are irrelevant to your body. Somewhere along the line the word was stolen by men lacking muscles in an effort to protect them from being criticized for not having a competitive amount of size. A 14″ arm is not aesthetic, it is small. A 19″ arm with a peaking bicep and horseshoe tricep is aesthetic.

The word is an adjective used to describe how someone carries their superhuman amount of muscle and without the muscle the term serves no meaning in regards to a physique. However, we are now bombarded by images of sharp and pointy stick figures along with taglines about them TRYING to achieve an aesthetic appearance when in reality it is an excuse for them not being successful in their pursuit of muscle mass. The terms we used to use to refer to flawlessly composed physiques like Flex Wheeler and Shawn Ray have now been hijacked by people who haven’t even added enough muscle to KNOW if they will be aesthetic or not. Skinny legs and sharp angles are the new calling card.

It is often cited that in the early stages bodybuilders were trying to mold themselves after the sculptures and paintings of the ancient Greeks. Guess what? They were pretty muscular, and a well built physique was a sign of masculinity. When we refer to automobiles as aesthetic it is almost purely used in references to rounded off cars with smooth edges where every sections flows into the next effortlessly. In all the determination people have to separate themselves from the unappealing mass monsters sometimes I think we forget that there is something entirely unaesthetic about a lack of muscle. People nowadays believe they can be “aesthetic” by default for just having a small waist even if the waist doesn’t taper into a flowing cascade of muscle.

In this world where Justin Beiber can grace the cover of Men’s Health with the physique of a heroin addict who has survived on premium plus crackers for several years, I fear we might have lost control over the words that we have used for decades to properly describe the infinitely impressive form of the top bodybuilders. The great Frank Zane is often touted as being the epitome of the aesthetic bodybuilder, but how many of these skinny kids typing #aestheticasfuck look a damn thing like Frank Zane?

What was once used to separate the appealing looking bodybuilders from the not so gifted ones is now used to separate all bodybuilders from the beach body type. The sad thing is that many local level Men’s Physique competitors truly believe they have a more aesthetic appearance than Shawn Rhoden or Cedric McMillan which is just further proof of the dumbing down and softening of our culture.

Aesthetics are something you possess or maintain while adding size, it is not simply the absence of size. Hopefully one day we can take the word back from all the small guys who use it to deflect from having to answer why they can’t build the physique they truly desire.