Anabolic Steroid Use Over Age Forty 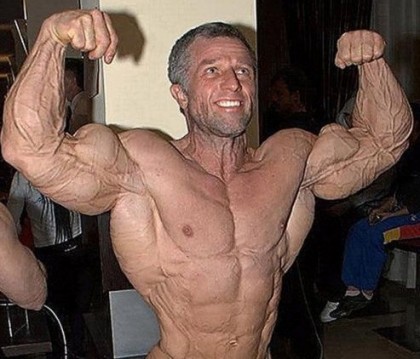 At some point during adulthood, the reality of our mortality begins to sink in, leading us to contemplate the consequences of our actions and re-evaluate our priorities. For most of us, this paradigm shift occurs in our 30’s; a time when the effect of aging begins to rear its ugly head and the prospect of self-induced health problems comes into clear focus. Prompting us to dispense with the care-free attitude of yesteryear, we start to place greater emphasis on health maintenance in an attempt to balance our interest in bodybuilding with a continued desire for good health. However, there comes a point where we must acknowledge our limitations and accept the fact that hardcore bodybuilding is a young man’s sport.

A failure to recognize and act on this fact is the most surefire way to set oneself up for future/current health problems—problems which could have been avoided. While we may be forced to abandon many of our old habits, this does not mean we have to resign ourselves to a life or normalcy. We are bodybuilders at heart and there is no reason to give up on the sport we love. We simply need to re-adjust our program based on our current station in life—something all of us will need to do sooner or later. The key is to make sure you do this before you encounter serious health issues, as doing so will allow you to continue reaping the benefits of bodybuilding well into old age and if you play your cards right, you might even be able to enjoy a cycle or two into your senior years!

Obviously, the older we get, the more we need to begin paying attention to our general health. Wisdom would say that we always should have done so, but with many of us choosing to ignore such advice early in life, the sooner we are able to take off the blinders and see what we are really up against, the sooner we can begin making decisions in our own best interest. By the time a bodybuilder reaches his 40’s (not 49, but 40), it is time to initiate a thorough investigation into the effects that one’s program has on the various systems of the body. More importantly, after this assessment has been completed, steps should be taken to remove, or at least minimize, any unacceptable health risks.

Cardiovascular damage is the #1 health risk facing PED using bodybuilders today. Steroids, growth hormone, and even insulin all have direct and/or indirect negative effects on cardiovascular health-function, greatly increasing the likelihood of experiencing premature heart attack/stroke. Additional risk factors, such as poor diet and a genetic predisposition for heart disease, when paired with irresponsible PED use, is a recipe for disaster. But it is not just the cardiovascular system the aging bodybuilder needs to be concerned with.

Prostate health is another area we need to keep an eye on, as early detection and treatment is often the key to a successful outcome with many prostate related issues. Along with organ-based health, the aging bodybuilder frequently has to deal with structural-mechanical impairment, such as joint and back (spine) pain/damage. All of these things and more should cause the more mature bodybuilder to take a different approach to his physique goals. Let’s touch on these one by one and cover some of the steps you can take to protect yourself from harm.

As mentioned above, cardiovascular damage, due to the fact that it can potentially lead to premature death via heart attack/stroke, should be a top priority of the older steroid user. Although all AAS have the potential adversely affect cardiovascular health markers/function, some place the bodybuilder at much greater risk than others. The most problematic of these are orals, or mores specifically methylated steroids. This class of AAS tends to cause the most dramatic fluctuations in lipids and it can do so quickly, frequently within just a few weeks of use. Worse yet, it can often take months to restore normal lipid values after discontinuation, placing the bodybuilder in a precarious position when cycling orals regularly.

There are two types of cholesterol: HDL and LDL. HDL is usually referred to as “good” cholesterol, while LDL is usually referred to as “bad” cholesterol. It is recommended that individuals keep their good cholesterol level over 60 in order to receive cardio-protective benefits, while readings below 40 place the individual at an “increased risk” for cardiovascular disease. It is very common for oral steroid users to have good cholesterol readings under 10, and in some cases I have even seen readings at zero. I shouldn’t need to tell you how harmful this is to your long-term cardiovascular health and the longer this continues the greater the potential damage. The bottom line is that methylated drugs, most of which, but not all, are oral drugs, are the most injurious form of AAS for the cardiovascular system. In an ideal situation, these drugs would be completely absent from the PED programs of older bodybuilders, but if they are employed, it should be done sparingly and in conjunction with preventative supplementation, which I will get to later.

Although oral steroids are typically the worst offenders when it comes to lipids, injectable are often equally bad when it comes to the other two primary cardiovascular health markers (i.e. blood pressure and hematocrit). Fortunately, blood pressure is fairly easy for many to control. Steroid selection, dosage, and estrogen management are the 3 areas one will need to focus on when attempting to make changes in this area. Elevated estrogen levels will generally cause an increase in blood pressure through excess water retention, making an anti-estrogen, such as exemestane or anastrozole, a necessity. However, it is important that you do not overly suppress estrogen production, as some estrogen is critical to cardiovascular health. Normalization should be the goal.

If this is not sufficient to bring things under control, you may have to consider reducing your dosage, or even eliminating the offending steroid altogether. Regardless, you need to do whatever it takes to bring things under control. It should also be said that there are certain OTC supplements, as well as prescription drugs, that can help lower blood pressure. Hawthorne berry extract (an OTC alternative) is particularly effective, as documented by extensive clinical research.

Unlike lipids and blood pressure, which may or may not be affected depending on the steroid used, hematocrit is affected by basically every steroid. While some drugs tend to be worse than others, all can be problematic if the dose climbs high enough. Neither are there any OTC/prescription solutions to this problem. There are only 2 sure-fire ways to resolve this issue—either continue reducing dosage and/or eliminating compounds until hematocrit is brought within range…or donate blood. In some people, even TRT doses can be problematic. In these cases, donating a pint or two is the only option.

Not much gets said about steroids and the prostate, at least among the younger crowd, as prostate related issues rarely rear their ugly head before age 40. However, older bodybuilders aren’t always so fortunate. Not only is benign prostatic hyperplasia (enlarged prostate) a potential concern, but if one develops prostate cancer when taking steroids (1 in 7 men will get prostate cancer during their lifetime), they can greatly accelerate the disease’s progression. For this reason, regular prostate check-ups are mandatory, especially for older steroid users.

For those experiencing BPH (benign prostatic hyperplasia), there are several treatment options available—both surgical and supplemental. However, many of these therapies have both short and long-term side effects, making them undesirable options for the majority of recipients. As with most steroid side effects, prevention is the best medicine. Although little emphasis is currently placed on the prevention of BPH in bodybuilders, this absence of information does not indicate unimportance. To the contrary, it was our pharmaceutical researchers—those who developed all of our traditional steroids—who discovered that some AAS affected this organ to a much greater degree than others. In fact, this issue was considered so important that it was often one of the primary criteria used when determining if a steroid would see production as a prescription drug or be permanently resigned to the record book of almost good ideas. By using a steroid’s androgenic rating as a reference, we are able to assess its potential effect on the prostate, assisting us with our selections. Refer to Julius Vida’s Androgens and Anabolics for a complete compendium of traditional steroids, along with their androgenic ratings.

Another side effect of AAS use that is more prone to cause problems for older lifters is its effect on connective tissue, particularly the tendons. AAS have been shown in numerous studies to decrease collagen production (as much as 80% according to some studies), and with collagen being critical to the maintenance of connective tissue like tendons, any decrease in its production will lead to weakness and an increased risk of injury. Some AAS have also been shown to increase collagen production, but in doing so, the internal structure of the tendon undergoes a type of remodeling, causing it to lose elasticity. This results in a bigger, but more brittle and therefore weaker tendon. Either way, the end result is the same—weaker tendons and an increased risk of injury. Lastly, certain steroids, such as nandrolone, have also demonstrated the ability to decrease the healing rate of injured tendons. It appears that AAS are all-around bad guys when it comes to connective tissue health.

This side effect is potentially more problematic in older bodybuilders for several reasons. For one, collagen production decreases with age, leading to weaker tendons over time. Two, most older bodybuilders have been exposed to a lifetime of hard & heavy training, resulting in additional, “work-related” damage to the tendons. When combined with steroid use, the likelihood of injury skyrockets, particularly if the bodybuilder continues to train with heavy weights as he ages. Needless to say, most bodybuilders would prefer to minimize their chance of injury, which leaves us with the following options.

Growth hormone is one of the most effective drugs for increasing collagen synthesis, which can have tremendously positive effects on not only the tendons, but all collagen containing tissues (hair, skin, etc). However, growth hormone is a double-edged sword, as higher dosages of the drug have several negative effects, outweighing the positive effects in terms of both number and severity. In order to avoid this, when using GH for rejuvenation purposes, it is important to keep ones dose within clinical replacement range (4 IU or less per day). This will provide the bodybuilder with all the benefits mentioned above, but without the negative effects that accompany high dose use.

This brings me to my next subject—healing peptides. This class of peptides is a boon for aging bodybuilders, allowing them to continue training with the zeal of a man many years younger. In Part #2 we will jump right into this exciting topic, while also addressing insulin, preventative supplementation, which steroids are good for your heart, and much more.