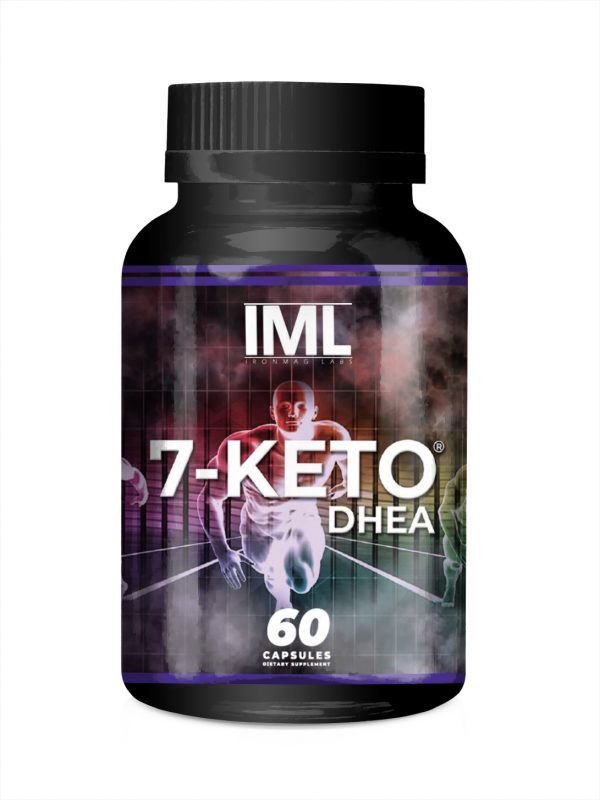 One of the lesser mentioned, although more interesting compounds to make its way into the bodybuilding community since the turn of the millennium is 7-Keto DHEA. Primarily marketed as a fat loss drug, its initial release was accompanied by a good deal of fanfare, but after the first few years of sales its popularity just kind of trickled off. These days, not much is said about it other than perhaps in passing. Given the dominance of stimulants in the fat loss arena, this isn’t really surprising. Trends show that most customers tend to prefer products they can feel, as it gives them the impression they are working. Although not necessarily a reliable indicator of efficacy, stimulant-based fat burners certainly fit this criteria, providing intense nervous system stimulation that is perceivable to everyone that uses them. While stimulants are generally effective, they certainly aren’t the only category of fat loss products capable of yielding positive results. More importantly, stimulants possess some undesirable characteristics which make chronic use undesirable.

When trying to maximize fat loss, attacking the problem from multiple angles is always preferable to exhausting a single pathway, especially when it comes to nervous system stimulation. Not only does the former approach provide superior results, but it reduces the risk of side effects as well. Some of these side effects include adrenal burnout, prolonged vasoconstriction (narrowing of blood vessels leading to reduced blood flow to muscles and muscle pumps), and increased cortisol levels are all common to stimulant use/abuse. The longer these side effects persist, the more problematic they become. The point here is that relying on stimulants alone is not only an inferior method of promoting fat loss, but is unhealthy and can promote side effects counterproductive recovery and growth.

For this reason, it is my opinion that stimulants, while potentially valuable during contest prep or planned periods of fat loss, have very little place in a bodybuilder’s off-season program. Drinking 1-2 cups of coffee per day is fine (and will even confer some health benefits), as is the intermittent use of a pre-workout product, but one should abstain from chronic/heavy use when attempting to build muscle tissue. The pros simply don’t outweigh the cons when muscle growth is the priority. So, unless you consider artificial energy more important than making progress, I recommend moderating your use.

The compound we’re going to discuss today is not only suitable for long-term use, but can also be administered in conjunction with stimulants; attenuating many of the side effects they present while further accelerating fat loss. Enter 7-Keto DHEA. Unlike most other fat loss products, 7-Keto DHEA’s benefits transcend its typical classification of “fat-burner”, being recognized for its ability to help enhance our bodybuilding efforts on multiple levels. Improved recovery and growth, anti-aging benefits, and even improvements in overall metabolic/immune system health are all part of the package.

So, what exactly is 7-Keto DHEA? A derivative of DHEA (the 3rd step in testosterone synthesis), 7-Keto is produced primarily in the adrenal glands and skin and is one of about 150 active metabolites that DHEA converts to. However, it bears very little resemblance to its parent hormone in terms of function, as it does not convert to testosterone or possess any androgenic activity whatsoever. It is known primarily for its fat loss and immune system boosting properties, although it provides many other direct and indirect benefits throughout the body.

Unfortunately, levels of 7-Keto DHEA began to decline around the age of 30 and by age 50, they are only about half of what they were at their peak. This drastic drop is partially responsible for several of the unwanted changes that normally occur as we age, such as increased levels of bodyfat and getting sick more easily and more often.

As a fat burner, 7-Keto DHEA provides the majority of its effects through 2 distinct mechanisms, the first of which is an increase in oxidation (i.e. the use of fat for fuel). However, the mechanism by which this is accomplished is fairly unique, with clinical research demonstrating 7-Keto’s ability to increase the concentration of key enzymes involved in fatty acid oxidation in the liver. In one study, levels of these enzymes (fatty acyl CoA oxidase, malic enzyme, and glycerol-3-phosphate dehydrogenase) rose by 128%, 860%, and 138%, respectively. Basically, the liver becomes more likely to use fat as a fuel source, effectively turning it into a fat-burning machine.

The 2nd mechanism by which 7-Keto DHEA causes fat loss, and which is also responsible for providing several of its other benefits, is a reduction in cortisol levels. As bodybuilders, we are anal about analyzing every aspect of human physiology involved in the fat loss and muscle growth process, even the minor ones, in the hope that we might be able to manipulate them to our advantage. This is especially true of hormones, yet most bodybuilders don’t give a second thought to cortisol, despite its potentially profound effect on not only our hormonal environment as a whole, but on many other processes which govern muscle growth and fat loss. Two hormones which have a direct relationship with cortisol are thyroid (T4, T3) and insulin. Although most of the literature on cortisol seems to be centered on its negative effects, it plays a critical role in helping the body cope with stress, but like with most things hormonal, having too much or too little can result in serious consequences. This is truer of cortisol than most hormones, as too much or too little can literally kill someone.

When it comes to fat loss, one way in which cortisol causes problems is by blunting thyroid production. Not only does it lower overall thyroid output, but it inhibits the conversion of T4 to T3 (the more active form of the hormone). The end result is readily apparent in those who have undergone long-term corticosteroid therapy (prednisone, methylprednisone; both are corticosteroids like cortisol), as these patients frequently add bodyfat during treatment. Unfortunately, bodybuilders are exposed to many risk factors for increased cortisol levels, such as weight training, cardio, low-calorie dieting, low-carb dieting, and not getting enough sleep (under 7 hours/night has been shown increase production of this hormone). Even the disconnection of AAS can increase cortisol levels via cortisol rebound. Basically, anything which places stress on the body, either physical or emotional/mental, will cause levels of this hormone to rise.

7-Keto DHEA has been clinically proven to increase T3/T4 levels, as well as the conversion rate of T4 to T3 by directly inhibiting the production of cortisol in the body. It does this by competing with the hydroxysteroid dehydrogenase enzyme (11 b-HSD 1), which is responsible for converting cortisone into cortisol. In laymen’s terms, 7-keto uses up circulating 11 b-HSD 1, thereby leaving less of this enzyme available to initiate the conversion of cortisone to cortisol. However, unlike synthetic thyroid, it doesn’t suppress the hypothalamic pituitary thyroid axis, so natural thyroid production remains unaffected even after discontinuation. This, along with the fact that supplemental 7-Keto has not been shown to have any significant adverse side effects, eliminates the need for off-time/recovery time when using 7-Keto DHEA.

Another downside of cortisol elevation is that it insulin resistance via an increase in blood glucose levels and inhibition of Glut-4 translocation, and if you’ve read any of my previous writings on the subject you would know that this is a big deal, as insulin is the body’s primary fat storage hormone. Any time levels of this hormone rise, regardless of the cause, the potential for fat gain increases. By taking steps to maintain a high degree of insulin sensitivity, the body utilizes insulin more efficiently and in turn, doesn’t require as much in order to meet its needs. This is another area where 7-Keto’s cortisol lowering ability comes in handy. All this sounds great, but what kind of fat loss can we actually expect from this stuff? In a double-blind, randomized, placebo-controlled trial, test subjects taking 7-Keto lost a full 3X as much fat as the control group, recording a total loss of 6.3 lbs compared to 2.1 lbs. For a non-stimulant-based fat burner with legitimate health benefits and zero known side effects, that’s not bad.

Most of us have heard about 7-Keto’s ability to assist with fat loss, but what about muscle growth? Every bodybuilder understands the basic concept of using weight training to simulate muscle growth, but a much smaller percentage understand it on a biochemical level. The simplistic version goes something like this. We train, which causes damage to muscle fibers. This damage then signals the body to make these damaged fibers larger, so they are better prepared to handle training stress in the future. Although accurate, this is actually a very complex process, involving many different interactions between various chemical messengers. One such messenger is a group of molecules called prostaglandins, which are responsible for inducing inflammation after training. There has been a lot of talk lately about inflammation and its detrimental effects on health, but it’s important to differentiate between the different types of inflammation because not all inflammation is bad. Systemic inflammation, which is chronic and affects the whole body negatively, is the one we want to avoid, but acute inflammation has positive effects in isolated areas of the body. In fact, acute inflammation is critical for adapting to the training stimulus, as it kick-starts a chain of biochemical events culminating in muscle growth.

One of these would be bad enough, but this stuff burns the candle at both ends, so to speak, attacking muscle tissue by both tearing it down and stopping it from being built up. On top of that, cortisol acts as an indirect vasoconstrictor by increasing sensitivity to the adrenal hormones epinephrine and norepinephrine, which are themselves potent vasoconstrictors. As mentioned earlier, this reduces blood flow to muscles, resulting in diminished muscle pumps and a potential decrease in nutrient delivery. Any way you look at it, cortisol is an anti-bodybuilding hormone, promoting both muscle loss and fat gain.

In addition to immune system management, promoting a hormonal environment more conducive to muscle growth, and stimulating fat loss, 7-Keto DHEA has also been shown to lower blood pressure and improve cholesterol levels by elevating levels of HDL (good cholesterol). There are many other suspected benefits currently being researched. With such wide-reaching effects, all of which are directly applicable to bodybuilders and backed by hard evidence (both clinical and anecdotal), 7-Keto DHEA has proven itself to be a valuable ergogenic aide. While supplementation can and will benefit anyone, its benefits are generally the most noticeable in individuals 30+ years of age.